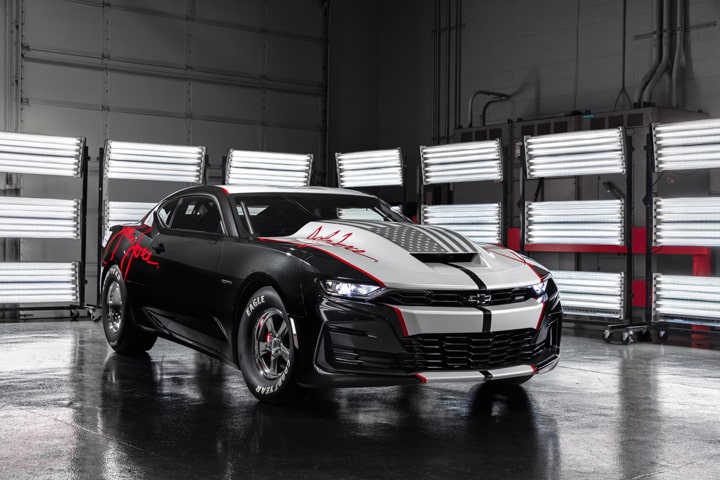 Initially shown at last December’s PRI show in Indianapolis, a one-of-a-kind John Force 2020 COPO Camaro will be auctioned at this week’s 49th Barrett Jackson Scottsdale Auction. With proceeds from the sale benefitting DonorsChoose.org, the winning bid goes to help classrooms in need, so that students in every community have the tools and experiences they need for a great education.

The 2020 John Force COPO Camaro is distinctively styled, with a black-and-silver paint scheme and signature red exterior graphics celebrating the 16-time NHRA Mello Yello Drag Racing Series Funny Car champion, who notched his 151st victory in the class this past Labor Day, winning the Chevrolet Performance U.S. Nationals at Lucas Oil Raceway outside Indianapolis. The exterior graphics include a ghosted American flag on the hood, a nod to Force’s escape hatch on his Chevrolet Camaro SS NHRA Funny Car, which sports the American flag. 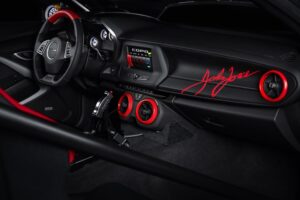 Chevrolet’s COPO program, relaunched in 2012, constructs cars built for the track only, and is a nod to the 1969 purpose-built Camaro drag-racing specialty car that was designed to compete in NHRA Stock Eliminator. COPO’s nameplate – a nod to the Central Office Production Order system – is what dealers used to build one-of-a-kind, high performance models, back in the day. Only 69 COPO Camaro race cars are constructed annually; 552 have been built since 2012 and are sold through a lottery system.

“John Force is one of the most legendary drag racers in history, and his legend started with Chevrolet,” said Jim Campbell, General Motors’ U.S. vice president of performance and motorsports. “We are proud to partner with him on this COPO Camaro and are excited to see what it will do on the auction block for charity.”

Ready for action on the track, the John Force COPO Camaro features a unique “2020COPO-FORCE” identification plaque in its interior, which has been inspired by the 16-time champ. “I enjoyed helping design this car,” said Force, who will give a custom helmet and fire suit to the winning bidder. “The car is stylish. Of course, under the hood it’s unbelievable. The COPO Camaro is already a formidable race car, but this one is even more special, as it will help support a cause I firmly believe in.” 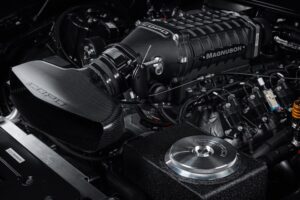 The John Force COPO Camaro, expected to cross the block on Friday, January 17th at about 8:30PM EST, is powered by a revised version of Chevrolet Performance’s supercharged LSX-based 350 engine, featuring a 2.65 4-liter engine with Magnuson supercharger and all-new LSX-SC cylinder heads. A Racer’s package, which includes a carbon-fiber air inlet, dual batteries, weight box, parachute and quick-change coupling for the engine, is also included.

Force, who finished fourth in the 2019 Funny Car standings, behind teammate and now three-time champion Robert Hight, Don Schumacher Racing’s Jack Beckman and Matt Hagan, seeks to extend his NHRA record for victories to 152 when the 24-race season opens February 7-9 on the Auto Club Raceway at Pomona dragstrip in California.