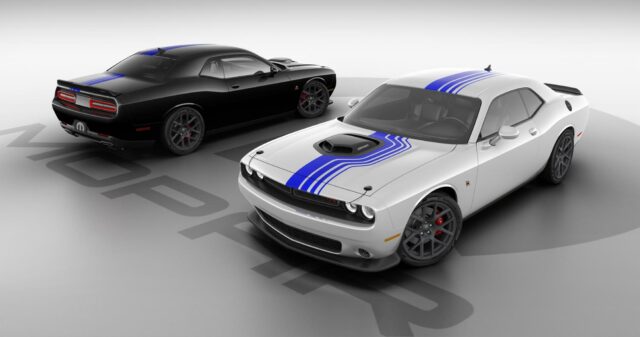 Mopar has been customizing vehicles straight out of the box for Dodge  for over a decade and to celebrate, Mopar announces the unveiling of their eye-catching  Mopar ’19 Dodge Challenger. Based on the popular 2019 Dodge Challenger R/T Scat Pack, the Mopar ’19 Challenger carries several exterior and interior options only available on this limited production Mopar-branded muscle car.

“Over the last decade, we’ve customized an impressive group of vehicles with exclusive Mopar performance parts and accessories that our enthusiast customers crave,” said Mark Bosanac, Head of Mopar Service, Parts & Customer Care, FCA – North America. “This year we’re commemorating our tenth Mopar build with another unique and collectible Dodge Challenger, which continues to be the modern muscle car every bit as beloved today as the first generation vehicle was 50 years ago.”

Mopar ’19 Exterior Available in either Pitch Black or White Knuckle, the Mopar ’19 Challenger builds upon the popular R/T Scat Pack model with a variety of head-turning exterior touches. Most noticeable is the unique Mopar Shakedown graphics, accented with asymmetrical Mopar Blue center stripes that run from the top of the front fascia to the rear decklid spoiler.

The famous throwback Shaker Hood package by Mopar provides a functional nod to its roots with it’s air-sucking vents.

Mopar ’19 Performance The proven and potent 392-cubic inch HEMI® V-8 engine pumps out 485 horsepower and 475 lb.-ft. of torque. Purists will be happy with a standard six-speed manual transmission makes a powerful heritage statement that enhances the base Dodge Challenger R/T Scat Pack, while a quick-shifting TorqueFlite eight-speed automatic transmission is optional.

Stopping the behemoth will be provided by none other than a set of  Brembo four-wheel disc performance brakes with red calipers.

Owner’s Kit The Mopar ’19 is delivered with an exclusive Owner’s Kit, packaged with a “birth certificate” with the exact date of manufacture and the proprietary build number. Also included is an exclusive full-color Mopar ’19 booklet, a unique keepsake with engraved vehicle number and a Mopar ’19 rendering produced by the Mopar design team.

Decade of Customization The Mopar ’19 Dodge Challenger joins an exclusive club as the 10th limited-edition, Mopar-modified vehicle delivered straight from the factory. This limited production run will include 100 units – 90 vehicles for the U.S market and 10 vehicles for Canada.

With a starting U.S. MSRP of $45,835, dealer orders for the Mopar ’19 Dodge Challenger open in September 2019. Vehicles are expected to begin arriving in dealerships in the fourth quarter 2019.