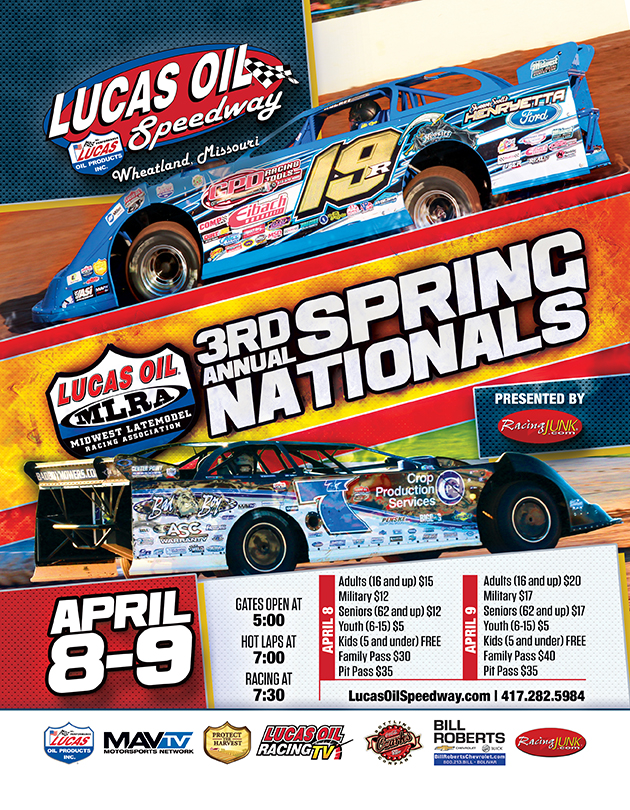 The 2016 Lucas Oil Speedway oval track season kicks off on Friday Night with the Lucas Oil MLRA Dirt Late Model Racing Series as RacingJunk.com presents the 3rd annual MLRA Spring Nationals. The race weekend will start off when the gates open at 5:00 pm on Friday. The first 500 fans through the gate will receive a free 2016 Schedule Magnet courtesy of City Magnet, and then the real action will begin. The MLRA brings the best regional dirt late model racers to the “Diamond of Dirt Tracks” for their first appearance of 2016. Terry Phillips of Springfield, MO took his third MLRA Championship in 2015 and is expected to lead the MLRA group to a tough battle. Also in action will be the Pitts Homes USRA Modifieds, featuring NASCAR Star Ken Schrader, and the Carson’s Corner Napa Auto Parts Street Stocks.

Next up, the action will continue at full speed on Saturday night with night #2 of the 3rd Annual MLRA Spring Nationals presented by RacingJunk.com. Phillips will still be racing fast to keep his championship name intact, and the Lucas Oil MLRA event winner will receive a $1,500 bonus courtesy of Pitts Homes. The feature will also be a 45 lap affair as part of the Pitts Homes 45th year celebration. In addition, a $500 bonus, in memory of Ron Jenkins, the original builder of Wheatland Raceway, will be awarded to the MLRA Event Winner. The Pitts Homes USRA Modifieds featuring Schrader will also be running a special $750 to win main event courtesy of Clearlight Inn, while the Carson’s Corner Napa Street Stocks will be in action, gunning for a top prize of $500 to win, courtesy of Elite Auto Repair.

For more information or to purchase tickets, visit LucasOilSpeedway.com or give them a call at 417-282-5984.