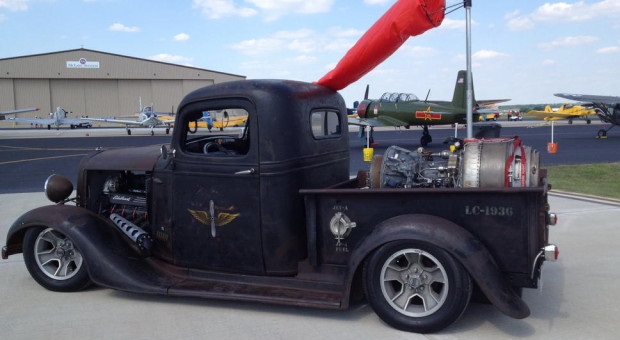 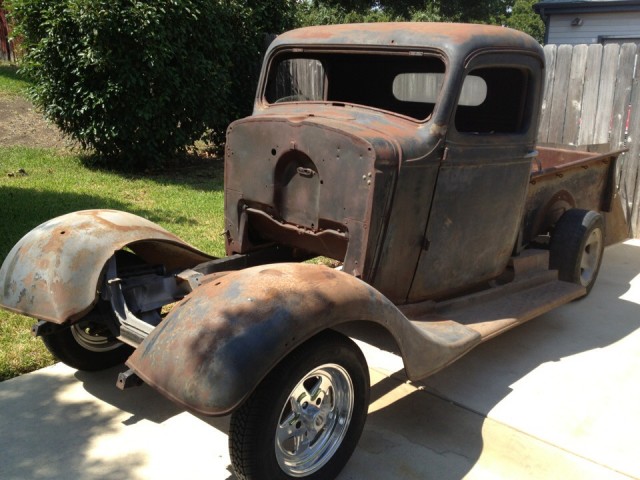 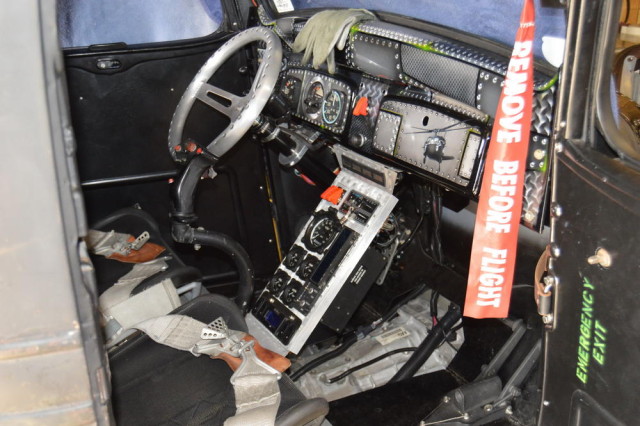 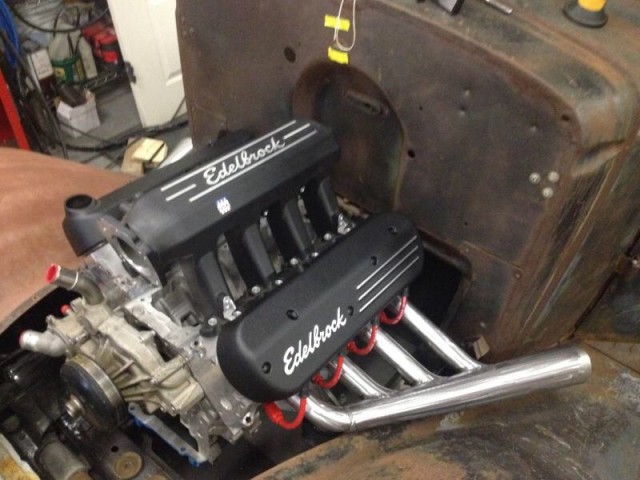 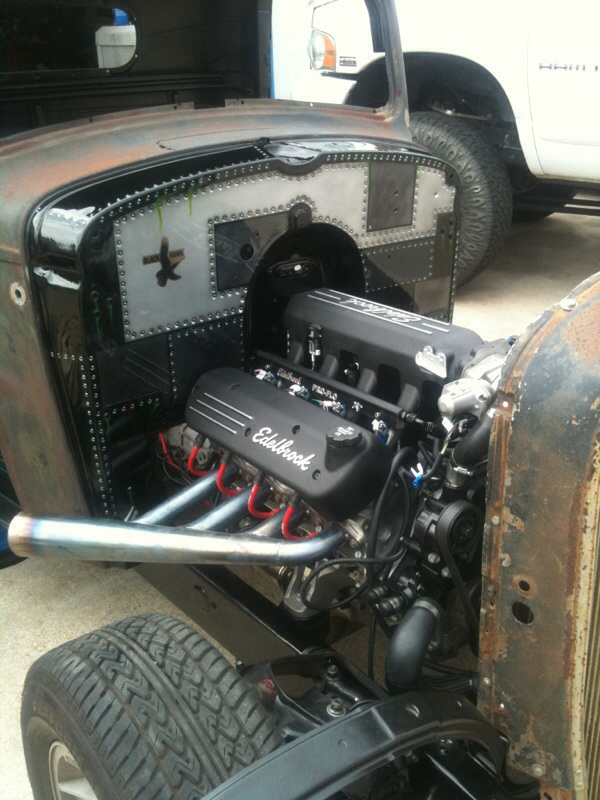 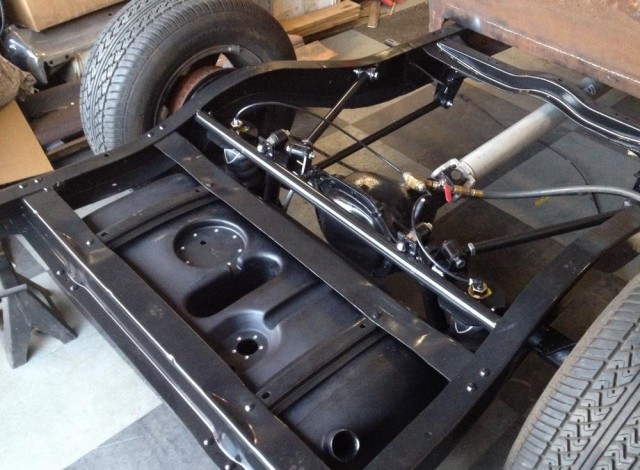 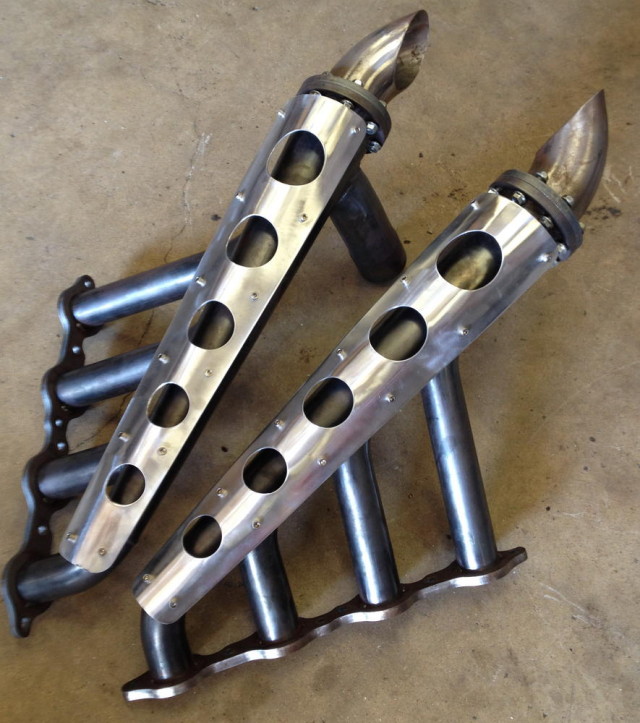 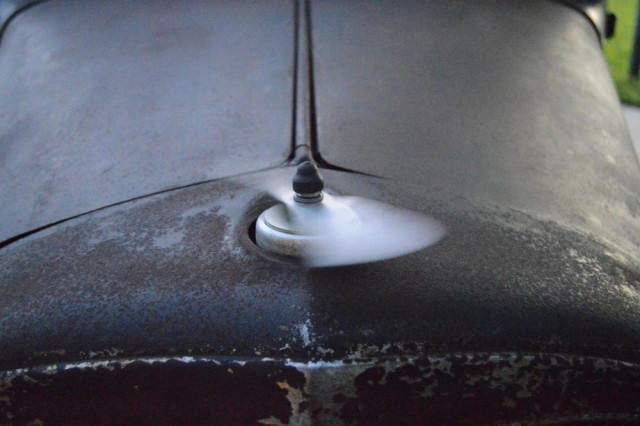 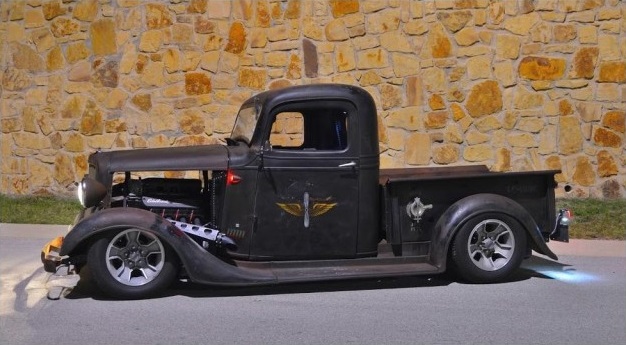 After retiring from a sterling career as an Army Aviation helicopter test pilot, Kevin decided to build a special, sturdy rat rod that could double as a daily driver and provide some fun for the kids. As an homage to his former profession, Kevin opted to use an aviation theme throughout the build, with the main source of inspiration a Lycoming T-53-L9 gas turbine engine, which would sit in the bed and keep those driven wheels planted under acceleration.

With the roller on the back of his truck, Kevin set to prepping and mocking up the old truck. The dash was cleaned and painted with a black base coat. With the helicopter theme coming through clearly, Kevin airbrushed in rivets and a bit of diamond-plate, as well as a tad of carbon fiber-look, and acquired an altimeter, attitude indicator, airspeed indicator, standby compass, eight day clock, and an overhead circuit breaker and switch panel to make the cabin appear like the real thing. With a genuine helicopter joystick mounted atop the T-56's shifter, there was no mistaking the interest here.

That famous T-56 transmission was mated to a late-model Chevy LS2 motor. To squeeze a few extra ponies out of that time-tested mill, a pair of Speedway Lakester headers and a Mutha Thumper cam were thrown on, Edelbrock valve covers added for some flash, and GTO engine mounts used to link it to the frame.

Then it came time to give the cab a quick sand scrub. The firewall and underside were blasted as well, then epoxied and painted. Similarly, the frame was treated with a wire-wheel, then coated in Eastwood chassis black. After the sandblasting was complete, the interior of the car revealed just how pristine the cab was - what a perfect canvas it would make for a top-quality build! With such a solid foundation, it only makes sense that the firewall would receive the same artistic treatment as the dash.

Once the Mustang II front end had its coil springs removed, Kevin built his own front and rear airbag mounts and cups. In fact, most of the kit was custom-fabbed by the man himself, though a Ride Tech controller and valves were brought in to keep things under control. The headers were given the stylistic treatment too, with perforated heat shields wrapped around the ceramic-coated headers. Custom turnouts were added, and the finished result is truly a work of art. Showing a similar level of meticulousness, Kevin topped the fake radiator cap with a rubber expansion plug featuring a small sliver of .063 aluminum fashioned into a rotor blade, which was designed to spin effortlessly at 15 mph! Talk about attention to detail and an appreciation for the theme!

Completing the aesthetic is the Aviation Branch insignia painted on the driver's door, and so a very clean, comprehensive build was finished. Sticking with a proven, fuel-injected motor with serious power allowed Kevin to focus his attention on the style of this car. While some purists might find the approach too glitzy for their tastes, the car's natural patina still shows through, and the touches are - excluding those found in the interior - fairly subtle. It's also a project that doesn't emphasize one department over another. Instead, it balances performance in all its aspects with looks and usability, and bonds them together with a unique theme, plenty of love, and a bit of humor - not everyone has a jet engine sitting as a piece of art in their art car!
Back to Post
About Tommy Parry 127 Articles
Tommy Parry has been racing and writing about racing cars for the past seven years. As an automotive enthusiast from a young age, Tommy worked jobs revolving around cars throughout high school and tried his hand on the race track on his twentieth birthday. After winning his first outdoor kart race, he began working as an apprentice mechanic to amateur racers in the Bay Area to sharpen his mechanical understanding. He has worked as a trackday instructor and automotive writer since 2012 and continues to race karts, formula cars, sedans and rally cars in the San Francisco region.