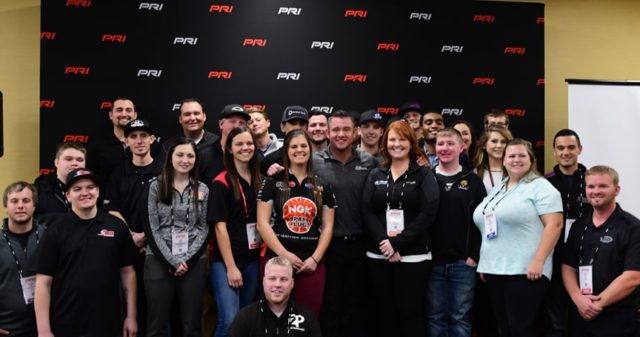 Wes Buck, the editorial director and founder of Drag Illustrated magazine, is passionate about the future of drag racing. “This is the great American motor sport,” Buck said in announcing the fourth annual 30 Under 30 list at the Performance Racing Industry show in Indianapolis.

Buck wants drag racing fans and the general public to be knowledgeable about up-and-coming drag racers, whether they’re drivers, mechanics, public relations operatives, track operators or officials in the sport. He wants these people to be seen as the “cool kids.” When he was growing up in the sport, drag racers weren’t the cool kids at school; he’s doing all he can to change those perceptions by accenting the future of drag racing. “We need to shine a light on these young men and women,” he said. “We need kids to want to do this for a long time.”

The fourth annual 30 Under 30 list and its members are the subject of Drag Illustrated’s December issue, which features NHRA Top Fuel racer and double race-winner Blake Alexander, of Bob Vandergriff Racing, on the cover. With 7,000 nominations, the staff of the magazine had a tough job comprising the 30 best, after nominees were submitted through the ZP Performance Steering nominating process.

“As a sport, we need to be looking forward, identifying the next superstars and heroes who will carry drag racing into the future. This is our way,” Buck stated, “of recognizing the accomplishments of a group of young people we believe have done big things and encouraging them as they continue to make moves in the sport.”

“We always do our best to include honorees from all corners of the sport, but this year’s list is perhaps our most diverse yet,” said Nate Van Wagnen, editor-in-chief. “From championship-caliber NHRA sportsman racers to small-tire racing stars, Australian Top Fuel tuners to series promoters and track managers, the 2018 30 Under 30 list truly represents the future of drag racing in all of its forms.”

Buck and Van Wagnen want race fans, and potential race fans, to understand that “drag racing is hard. It’s a trying sport and extremely expensive,” Buck reminded. “It warms my heart to see young people out there in the sport. It’s my job to shine a light on them.”