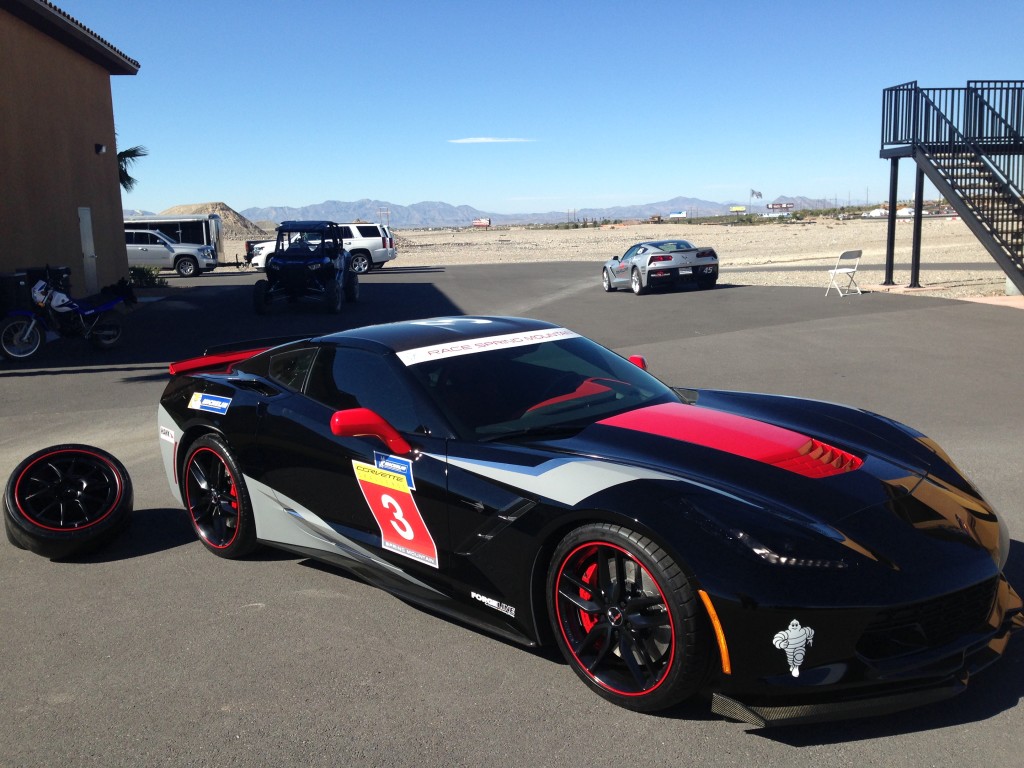 There’s no denying that the  Corvette C7 Stingray is a pleasure to drive, even for those who don’t live amongst the Corvette-converted. It’s a true sports car – low, sleek, slick and sexy with enough oomph to get your heart-racing and enough weight to make corners feel like the best kind of dare.  But amp it up with performance parts, and dial down the weight to increase track performance and you’ve got a car that’s a lot more than a millionaire’s plaything. You’ve got an honest to god race machine.

To show off those new parts options, Chevrolet Performance invited a group of journalists to Spring Mountain Raceway outside of Parumph, NV to demonstrate ways to turn a stock C7 into a Z06, designed for 2014+ Stingray models, including Z51-equipped cars.

“We’ve selected specific components from the Corvette Z06 and engineered them to fit the Stingray,” said Jim Campbell, Chevrolet U.S. vice president of Performance Vehicles and Motorsports. “These Z06 parts enhance the handling, braking, cooling and downforce performance of the Stingray.”

Basically, if you don’t want to go all in and get a Z06, these parts can help increase performance through cooling–the radiator fan, secondary radiator kit, rear transmission oil cooler, replacement grille which increases airflow, quarter panel vents, carbon fiber and prop shaft, all of which deal with the heat issues.

The T1 suspension package, currently homologated in SCCA’s Touring 1 class, includes “more aggressive shocks, stiffer stabilizer bars and new lower control arms with stiffer bushings. It was developed for racing and the aggressive shocks were utilized to maintain eligibility to compete within the rules of most club racing sanctioning bodies,” according to Chevy Performance.

Ron Fellows, champion Corvette Racing driver, collaborated with Chevrolet Performance engineers on the all-new portfolio. Many components of which will be employed for the new Michelin Corvette Challenge racing series starting in February 2016. Drivers will run their Z51 Stingrays with the track-developed Chevrolet Performance parts and Michelin racing slicks in dry weather and Michelin Pilot Super Sport tires in wet conditions.

“Here at Spring Mountain, we drive the Corvette Stingray and Z06 at their limits nearly every day, so we’re in a unique position to recognize the parts that are most effective,” said Ron Fellows. “The effect of the new, Z06-based parts on the Stingray’s track capability is dramatic. They take the Stingray’s already great stopping and cornering capabilities to yet another exciting level of stability and precision.”

Journalists drove two Corvettes on the track: the basic Z51 package first – already a solid, sultry sportscar, then the version with the upgraded Z06 parts. The suspension mods, in particular, were most noticeable on the track. The stability and control the T1 package provided were evident, keeping the car tighter around corners and generally more grounded, which results in more feeling of control at speed. As an amateur driver, it’s hard to push the car fast enough for a few laps to get a real sense of the other parts. As a passenger however, doing a hot lap with Ron Fellowes in one of the ‘Vettes designed for the new Michelin Series, all of the mods come alive – or that could simply be the pleasure of an expert driver manhandling a well-built machine around a familiar track at speed.