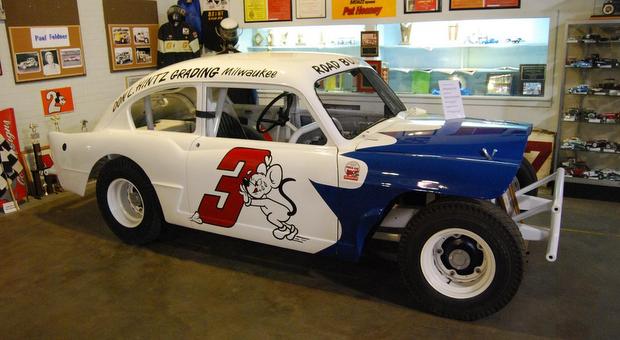 Short-track auto racing played a big role in the entertainment life of Midwesterners who lived far from big cities. Southeastern Wisconsin was a hot bed for such venues, with racing taking place at dozens of tracks both mid-week and on the weekend. The cars that ran there were different than the Hollywood stockers of the East Coast—where the formula was built around full-fendered ‘30s Ford Tudors and coupes powered first by flathead Fords and later by small-block Chevys. The Midwestern cars used similar bodies that were cut down with fat tires at all corners. They had more of a hot rod styled “track roadster” look to them.

Since 2006, an area on the second floor of the Wisconsin Automotive Museum in Hartford, Wis., has been set aside as a tribute to the drivers, event promoters and car sponsors that made Midwestern motor sports history for over 70 years. When you view the cars and memorabilia, you can feel the driving skills, competitive energy and sense of sportsmanship that marked those races.

“The Southeastern Wisconsin Short track Hall of Fame was conceived to honor the greats of this racing era and to commemorate and preserve this very real slice of Wisconsin history,” museum director Dale Anderson told The Burnout. “The museum board and a number of sponsors got together to support bringing the Hall of Fame here and it has worked extremely well for us.”

The Hall of Fame honors the great drivers and preserves the excitement of short-track competition for fans of all ages to enjoy and relive. Each month, a number of the history-making drivers get together for coffee and to talk about the good old days of auto racing in the ‘40s, ‘50s, ‘60s and ‘70s. Some of the outstanding drivers are also awarded Honoree of the Month bragging rights.

As an example, Red Adams was one honoree. He was founding father of the original Milwaukee Stock Car Assoc. (MSC) as well as a car owner, sponsor and driver. Adams began his career in 1949 at the first race at Hales Corners Speedway. He also competed in the last race ever held there in 2003.

Adams raced stock cars, modifieds, sportsman and late models. He competed in MSC as well as with AAA in the late model series at Williams Grove, Pa., Toledo, Ohio, DuQuoin, Ill. and the Wisconsin State Fair Park 1-mile oval. A display at the museum featured photos, video and memorabilia of his career.

The racing group also publishes the Vintage Modified Stock Car Newsletter that is available by subscription for $20. The newsletter features articles by some of the Midwest’s best vintage racing writers It is loaded with classic photos and scenes from the group’s past shows, as well as an up to date events schedule. Subscribers can also vote for the inductees to the Hall of Fame.