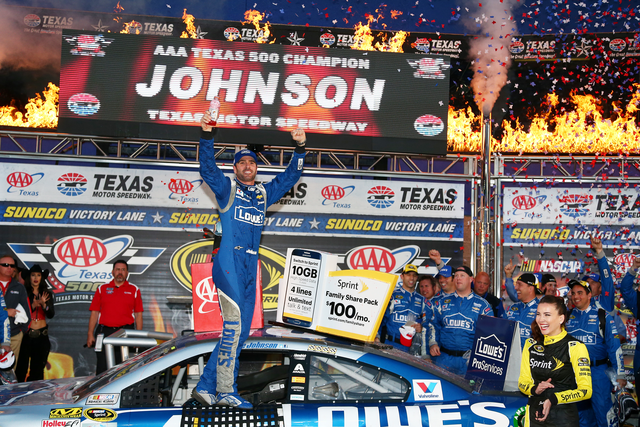 Sunday’s Quicken Loans Race for Heroes 500 at Phoenix International Raceway is the second-most anticipated race of the season.  Say what you want about the season-opening Daytona 500, the Coca-Cola 600, the Brickyard 400 or either the spring or fall races at Talladega.  None of those hold a candle to Sunday’s race in front of an expected sellout crowd of nearly 90,000.

The reason is simple: Four drivers will emerge from the eight remaining drivers still in contention in the Chase for the Sprint Cup and will move on to next Sunday’s (Nov. 22) season-ending Ford 400 at Homestead-Miami Speedway.

As for the other four drivers?  They’ll join the ranks of those that were eliminated in the first two rounds of this year’s Chase, an all-star lineup including Jimmie Johnson, Dale Earnhardt, Jr., Denny Hamlin, and Matt Kenseth.

Those four drivers alone accounted for one-third of this season’s wins (12 in total), yet they’ll be nowhere to be found when it comes to crown a champion come next Sunday at Homestead.  Granted, the excitement and focus will be very high at Phoenix.  Not only will the track built into the side of a mini-mountain be sold out, I expect perhaps the highest TV ratings of the season (disclosure: I work for NBC, which will be televising the race).

But what very few people are likely thinking about is how we could continue to see the trend of drivers that were outstanding during the regular season, only to be prematurely eliminated in the Chase.

Joey Logano is in a must-win situation.  If he does not take the checkered flag, he will not advance to Homestead.  And with him eliminated, there goes Logano’s six wins this season.

Then there’s Kevin Harvick, who has three wins this season and is the defending Sprint Cup champion.  Even though Harvick comes into Phoenix third in the standings, he’s just three points ahead of fourth-ranked Martin Truex, Jr. and 10 points ahead of the first guy below the cutoff line, fifth-ranked Carl Edwards.

What’s more, it’s hard to find someone who believes Harvick will not win this fifth straight race at Phoenix with ease, and what would be the eighth career triumph of his career at the flat one-mile track.

Unfortunately, I believe Harvick’s streak will come to an end.  Whether that also means he’ll have enough points to reach Homestead after Sunday’s race is a whole other thing.  But look back on the first two elimination races of this year’s Chase at the ends of Round 1 and Round 2.

Johnson came into Dover as the most dominant active driver ever at the one-mile all-concrete track.  You’d have to have looked long and hard for someone who didn’t think Johnson was a slam dunk to win Dover and advance to Round 2.

Unfortunately for Johnson and his fans, the unthinkable happened.  He and his team were eliminated – not coincidentally by Harvick, who was in a must-win situation or he wouldn’t have advanced to the next round.

Now move forward three weeks to Talladega, the elimination race of Round 2.  Dale Earnhardt, Jr. was considered a heavy favorite because he is the winningest active driver at the superspeedway, coming into last month’s race there with six wins, including a triumph earlier this spring. 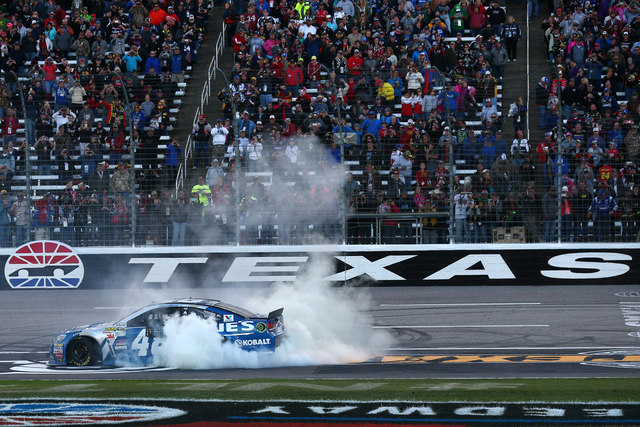 So what happened?  Earnhardt, Jr. missed advancing to Round 3 by one mere position on the race track.  When the race was halted after a green-white-checkered ending, Earnhardt finished second and was eliminated, while Logano ultimately swept the entire round with three consecutive wins.

Who caused Earnhardt to be eliminated?  It wasn’t necessarily Logano, but rather, Harvick.  Had he not run into Trevor Bayne, triggering a big multi-car wreck that brought out the race-ending checkered flag, Harvick would have been eliminated.

But because he managed to finish one position above the elimination line, he advanced to Round 3.

And let’s not forget Hamlin in the same race.  He came into ‘Dega in a great position – second place.  He looked like a cinch to make it to Round 3.  Unfortunately, he didn’t and his hopes for a first career Cup championship went with it.

So here we come to Phoenix, where Harvick has dominated, not to mention he’s someone who has directly or indirectly ticked off other drivers in this Chase.

And Logano, whose run-ins with Matt Kenseth at Kansas and then Martinsville led to a two-race suspension for the 2003 Cup champ, not only has to win Sunday – or else – he has to do so while staying away from guys he’s had run-ins in his career with, like Kenseth’s teammate Hamlin.

Let’s not forget Logano’s Penske Racing teammate, Brad Keselowski.  He also has to have a top-five finish to have any hope of potentially advancing to Homestead.  And that may not even be enough.  Depending upon how the other Chase drivers fare, Keselowski may have to win Sunday’s race to advance – lest he fall short of points.

Not only will Logano and Keselowski fans be watching their favorite drivers’ progress at Phoenix, so too will executives of Ford Motor Company.  For if Logano and Keselowski both fail to advance to Homestead as Chase finalists, there would be quite a bit of embarrassment in the Ford camp.

Why?  If Logano and Keselowski fail to advance, that means there will not be one Ford driver to race for the Sprint Cup championship in the Ford 400, part of Ford Championship Weekend at Homestead.

If you don’t think Ford execs back in Dearborn, Michigan aren’t worried about that, think again.  They’re likely saying a few extra prayers – maybe even a few more novena’s – that at least one of the Penske drivers makes it.

If Logano, Harvick, Keselowski and Edwards are all eliminated Sunday, that means we’ll wind up with four more Chase drivers that failed to make the big dance, and their 12 combined wins – along with Johnson’s, Hamlin’s, Earnhardt’s and Kenseth’s combined 12 wins – will ultimately mean nothing when it comes to crowning an eventual champ.

Think of it: We could potentially have drivers that have accounted for 24 or more wins – two-thirds of the season – not in the final four of the Chase.

Which is something whose irony will likely not be lost on many: a playoff format that stresses wins will ultimately be decided by four finalists who may only have a handful of W’s between them.

It almost makes you wonder if wins really are that important, after all.  For if the driver who wins this year’s championship ultimately winds up with only one or two wins all season long, don’t be surprised if we start hearing drivers and fans talking about how the Chase format needs to be changed once again.

And even though their arguments may have merit, yet another change in the format is the last thing NASCAR and the Chase need.