RacingJunk News > Racing > Drag Racing > When the Race is Over, Testing Begins 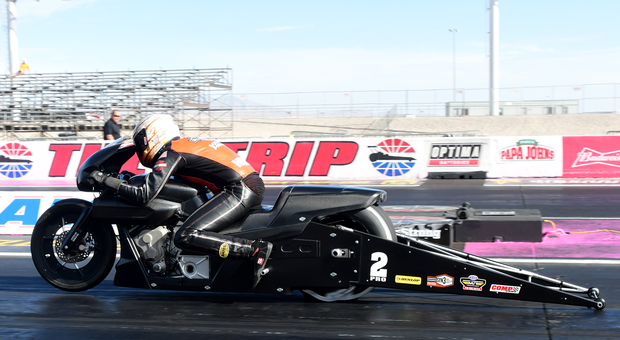 With the SEMA show, one of the bigger trade shows for professionals in the motoring and motorsports businesses, going on in Las Vegas, many NHRA competitors stayed over after the Toyota NHRA Nationals to get in some testing time before the season finale at Pomona in a week and a half.

Like most test days, this one was leisurely, as most of the teams were dressed in civilian clothes – and in some cases, so were the machines.

Vance & Hines, which had to return to a previously-used chassis when their new machine developed issues at mid-season in the 16-race Pro Stock Motorcycle grind, brought out a brand new chassis to test the day after Eddie Krawiec won his seventh race of the year and boosted his hopes for a fourth championship (all he really has to do is qualify – unless LE Tonglet grabs big qualifying points at Pomona). 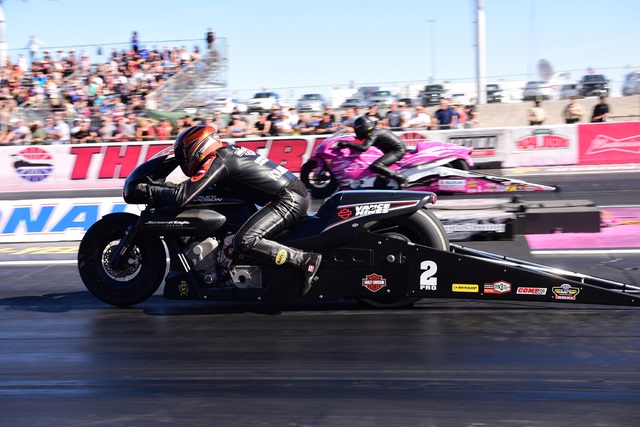 The new bike had never made a pass until the Monday test day and its first pass, with five-time champ Andrew Hines at the controls, came in at 7.07 seconds in the quarter-mile. The bike uses Vance & Hines’ Harley-Davidson engine, similar to one which ran in competition; the body is the same as used in competition, but the chassis’ angles and pick-up points are different from what’s being used now.

Both Matt and Andrew Hines said they thought the bike ran okay its first time, but there was a problem with the shifter that cost at least a tenth, Andrew Hines said. The second run was a far better 6.98-second pass, but they were both still disappointed, after a third 6.99-sec pull, that they weren’t able to get 60-ft times at .106; they were getting .109 -sec 60-ft times on all three runs.

In addition, there are people here just waiting for SEMA to open so they can make known their plans for the coming season. Among them is Bob Tasca III, who has four victories in Funny Car and has been to 11 final rounds. After Ford left NHRA in 2015, Tasca’s program was relegated to part-time. His family has sold Ford products for generations. Tasca is hoping to return to full-time competition in 2018 – and with a final meeting Monday night to either cement the deal or to force him to continue with a part-time effort, he’s hoping to return to NHRA Mello Yello competition next year.

“We’ve got a good relationship with DSM,” he said, speaking of Don Schumacher Manufacturing, which is building chassis and engines for his current part-time endeavor, “and we’re hoping to get Ford interested in returning to NHRA racing. It isn’t right that they’re not here.”

Shawn Langdon spent the mid-day getting licensed in Alexis DeJoria’s Toyota Camry Funny Car, as he’ll be moving from Top Fuel to the flopper class in 2018. DeJoria was on hand to watch the spectacle; he appeared, on his first pass, to edge close to the wall, just as DeJoria had throughout the race weekend. She won her first round but fell to runner-up Courtney Force in the quarter-finals. 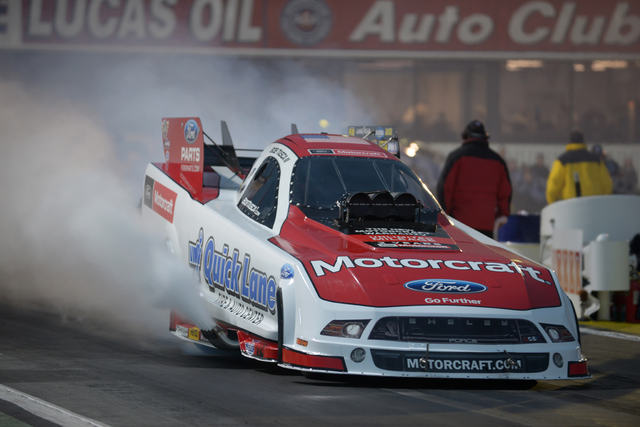