One of Acura’s newest teams in IMSA’s WeatherTech SportsCar Championship won the 59th Rolex 24 at Daytona in a tight battle with both Cadillac and Mazda, the trio of manufacturers’ cars coming to the end of 807 laps of racing within seven seconds of one another. It was a momentous victory for the No. 10 Wayne Taylor Racing (WTR) Acura ARX-05, who took their third consecutive victory in the midwinter twice-around-the-clock contest, becoming only the second team, following Chip Ganassi Racing, to attain this feat in the race’s 59 runnings.

It was the first race with Acura for WTR, after winning the past two years with a Cadillac DPi and they had to battle a stout group of competitors for their four new drivers to earn those coveted Rolex watches. It helped that both Ricky Taylor and Helio Castroneves, who drove with Acura Team Penske the past three years, joined WTR in the off-season, along with Filipe Albuquerque (who drove to the finish) and 2016 Indianapolis 500 winner Alexander Rossi.

When the challenging No. 01 Cadillac DPi of Chip Ganassi Racing had a flat tire with seven minutes remaining after conducting a fierce battle with the reigning champions, that instance cleared a path for Albuquerque, who both started and finished this race for WTR, to run to the checkered flags fully 4.704-seconds ahead of a frightfully fast Kamui Kobayashi in the No. 48 Cadillac. 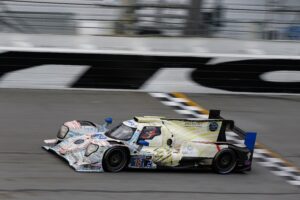 Wayne Taylor Racing’s victory came as they gambled on a two-tire stop for the final call at the pits, the team’s 31st. Taking only two tires, Albuquerque had an advantage time-wise but had to hold off Kobayashi, who took four Michelin tires. This victory for Acura puts the brand in class with Mazda and Toyota, who have each claimed 24-hour victories at the summer classic, the 24 Heures du Mans.

The first five DPi prototypes were all on the same lap as the leader after battling from green to checkers, with Harry Tinknell in the No. 55 Mazda just 6.562 seconds behind the leader, Juan Pablo Montoya fourth in the No. 60 Acura, 54.418 seconds back and Renger van der Zande recovering from that flat in the No. 01 Cadillac to take fifth, 1:07.744 seconds behind Albuquerque. 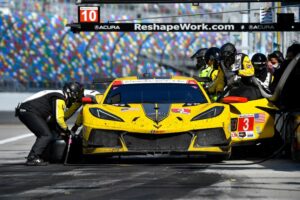 The final GTLM class race – before the class becomes GTD PRO – in the Rolex 24 at Daytona netted a first-place result for last year’s season champs, Corvette Racing, with the No. 3 C8.R leading the No. 4 Corvette to the flags by 3.519 seconds. The GTLM class had difficulties and changed dramatically before race-start at 3:40PM Saturday afternoon, after the No. 25 RLL Team BMW M8 GTE speared the WeatherTech No. 79 Porsche 911 RSR 19 coming to the flags. The BMW would eventually finish fifth in class and the Porsche took the sixth and final spot. As the WeatherTech team put it, “The story of the race was written 100 yards before the green flag.”

That win for Corvette Racing wasn’t as easy as it might have looked as the team’s reliably quick Antonio Garcia tested positive for COVID-19 at mid-race and would have to stand down and quarantine for the balance of the competition, leaving the heavy lifting to Jordan Taylor (overall winner Ricky’s brother) and Nicky Catsburg.

“While Antonio Garcia tested negative in preparation for his arrival for the Rolex 24, we have received notice that he has now tested positive in preparation to depart the country. He was immediately pulled from competition and, although he wasn’t experiencing any symptoms, will not longer participate in any additional race activities,” the team said. All team members who had close contact with Garcia will be tested after 72 hours, per CDC guidelines.

The LMP2 and LMP3 categories spawned new winners (this is the first year for LMP3 in the US) after 24 hours of racing. With an enlarged group of competitors in LMP2, a class easily neglected in 2020, victory went to the No. 18 ORECA of Era Motorsport, a team in its second year of IMSA WeatherTech series competition, with the No. 8 Tower Motorsport ORECA on the same lap as the leader, albeit nearly 20 seconds back. This duo completed 787 laps and were classified sixth and seventh overall, a good result for the chassis constructor and for these two teams.

LMP3’s winners were the No. 74 Ligier fielded by Riley Motorsports. Gar Robinson, who moved to IMSA competition last year, had the fortune to have INDYCAR veterans Spencer Pigot and Oliver Askew onboard, along with Scott Andrews. Pigot attributed the victory to staying out of trouble. “Nobody knew how reliable these LMP3 cars would be; I don’t think they’d ever run a race this long. One thing we knew,” he stressed,” is that we’d have the best-prepared car in the paddock and i think we showed that today.”

New entrants Winward Racing brought home a win in the GT Daytona (GTD) class for the Mercedes-AMG GT3, the first victory for the marque in this class. The populous GTD class, which features manufacturer battles, last year went to Lamborghini’s Huracan for the second year in a row and the Italian marque was definitely looking for a repeat. They settled for the third and final spot on the podium as the first two places went to Mercedes-Benz.

The results of this 59th Rolex 24 at Daytona are, for the moment provisional, as IMSA goes through its customary procedures to make certain all cars and drivers were legal, which can take time when dealing with 49 cars in five different classes. As it is, the next race in these 36 Hours of Florida takes place in March, with the Mobil 1 12 Hours of Sebring tantalizing members of the IMSA community. While Daytona is the longest race on the schedule, Sebring is ultimately the most difficult on a bumpy and challenging track.