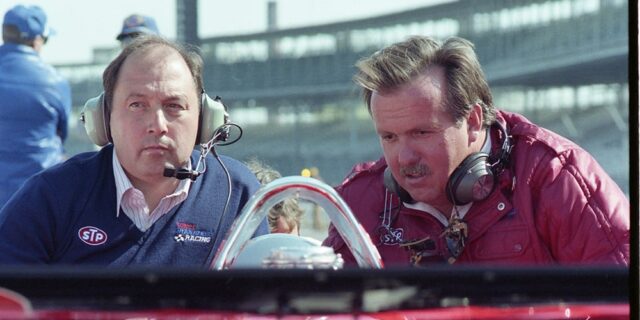 The Granatelli family is royalty to the INDYCAR community. No one could ever forget the kiss planted on 1969 Indianapolis 500 winner Mario Andretti by his car owner, Andy Granatelli. That car owner and showman owned and championed many famous Indy cars before and after that singular triumph at the close of the 1960s.

Granatelli’s son, Vince, who died January 22, 2022 at age 78, was both a mechanic for his father’s teams and an INDYCAR team owner in his own right. He started his motorsports career as a mechanic in 1961, at Indianapolis Motor Speedway. He was working on the Novi-powered machines his father brought to the Brickyard that year and, later, worked on the all-wheel-drive and rear-wheel-drive turbine-powered machines during the decade when Andy Granatelli’s mechanical innovations were encouraged and celebrated.

When Parnelli Jones, in 1967, qualified the Paxton Turbocar gas turbine four-wheel-drive race car in sixth place and dominated the race, leading 171 of the first 196 laps before a transmission bearing failed on the 197th lap, the car’s race lead and its pending victory went to the more common (by that time) rear-engine race car, of A.J. Foyt which he drove through the debris of Jones’ bearing failure to earn his third Indy 500 title.

Vince Granatelli’s hard luck at Indianapolis Motor Speedway continued in 1968, when a similar calamity befell the rear-engine, turbine-powered Lotus of Joe Leonard had a fuel pump driveshaft failure while leading, this time with nine laps remaining in the 200-tour contest.

Vince Granatelli also worked on the Eagle-Offy that Graham McRae drove to 16th and Rookie of the Year in the 1973 edition of the Greatest Spectacle in Racing. His mechanical endeavors were highlighted by working on STP-sponsored Formula One efforts in the early 1970s; he left the sport, along with the rest of his family, after the 1974 season, focusing on a variety of business ventures outside motorsports.

Granatelli went on to own Pit Stop Service, a high-performance garage where he also built some high-speed cars that earned records on the Bonneville Salt Flats. His Chevrolet Camaro stock-body passenger car prepped for Andy Granatelli recorded a 242-mph record on the salt. That success was celebrated with a cover shot of the large driver in a lawn chair at the Flats.

Because there is no cure for racing, Granatelli returned in 1987 as the owner of Vince Granatelli Racing. Using the famous day-glo red his father made famous, Granatelli’s CART entries were stand-outs for livery alone. Colombian racing star Roberto Guerrero won two races for the team in its rookie, 1987 season, on the Phoenix one-mile oval and at MId-Ohio Sports Car Course. Guerrero was leading the Indianapolis 500 that year, with 19 laps remaining, but two stalls on a pit stop, due to a damaged clutch, dropped him out of the top spot, finishing second behind Al Unser, who earned his fourth Indianapolis 500 that year.

Vince Granatelli’s cars would secure an additional two victories in 1991, again at Phoenix and also on the Nazareth Speedway mile oval, with two-time winner and Indianapolis Motor Speedway speed record-holder Arie Luyendyk at the wheel.

While Vince Granatelli’s time as a team owner was short, his remarkable capabilities with wrenches made him a legend of open-wheel racing. He succumbed to pneumonia and COVID-19, the family said.

About Anne Proffit 866 Articles
Anne Proffit traces her love of racing - in particular drag racing - to her childhood days in Philadelphia, where Atco Dragway, Englishtown and Maple Grove Raceway were destinations just made for her. As a diversion, she was the first editor of IMSA’s Arrow newsletter, and now writes about and photographs sports cars, Indy cars, Formula 1, MotoGP, NASCAR, Formula Drift, Red Bull Global Rallycross - in addition to her first love of NHRA drag racing. A specialty is a particular admiration for the people that build and tune drag racing engines.