Have you ever been watching a movie with a cool car in it, and thought…I wonder where that car is today? I’m sure many of the cool cars that have made appearances on the big screen are long gone. I assumed the same fate for the shiny red & white 59 Corvette that rush chairman Eric “Otter” Stratton drove in the cult classic movie “Animal House.” That’s what I thought at least until I met Paul Smith of Eugene, Oregon and had the honor of checking out his collection. While wandering through his amazing cars which mostly consisted of early Ford hot rods and drag cars I enquired about the Corvette as it kinda stood out from the rest. Paul replied that he’d had it forever and that it was used in a movie at one point. Now really curious I asked, “what movie?” “Animal House” Paul replied, “it was filmed right here in Eugene…ever heard of it???” 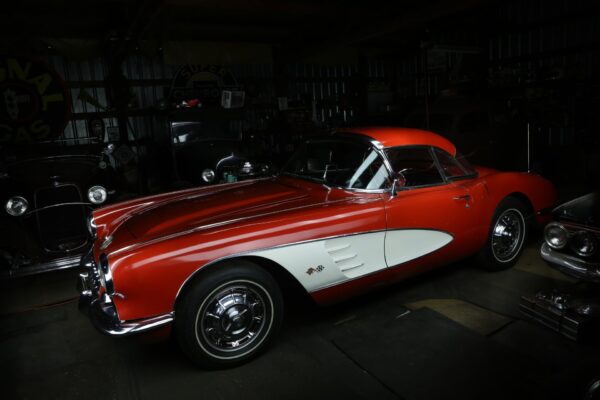 Paul was a professional drag racer from 1973 to 1979 and a two-time National Champion with his 55 Chevy wagon. The wins made him a bit of a celebrity in town and Bob Cochran Motors asked him to sell cars for them in 1975. Paul would have had to cut his hair, and that didn’t interest him so he passed on the job, but while he and his wife were at the dealership she spotted a red and white 59 Corvette that she really liked. Paul decided he would purchase the car for her for being so understanding of his heavy travels with drag racing. The Corvette had mag wheels on it that he didn’t care for, but he agreed on the price if they swapped out the mags for the stock wheel covers that were on a green Corvette in the lot. 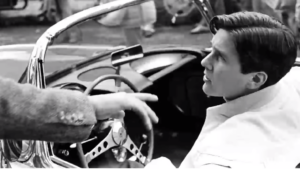 In the off-season of drag racing Paul would drive trucks for Hollywood and was active in a number of movies. When Universal came to his hometown to film Animal House Paul was part of the crew locating cars for the set. The cars needed to be era correct and when it came to locating a Corvette, Paul mentioned that he had one. The head of the transportation department checked out his 59 and said it would work, so Universal drew up a contract for the 4 week rental of Paul’s Corvette for the sum of $400. The Vette was used in a number of scenes in the movie, and it is the first thing that Pinto and Flounder see as they approach the Delta fraternity house for the first time. The Corvette is front and center on the movie poster and is the focal point in the famous photo of the Deltas in front of the frat house with John Belushi sitting on the front fender with beer in hand. 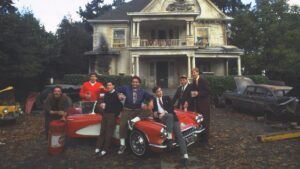 After the filming of the movie, the Corvette saw very little drive time and eventually went into a 40+ year slumber. The 59 still wears its factory paint and is absolutely untouched from how it was used in the movie. Luckily for someone out there, Paul has decided to pass the Corvette onto a new caretaker. The 59 is slotted for auction, but Paul is open to offers on the Corvette prior to its auction date in April 2021.

You can reach out to Paul through the website: Eyes on Classics – Classic Car Photography, Classic Cars for Sale

About Chadly Johnson 20 Articles
I have a deep passion for telling the stories of survivor hot rods and customs from the glory days of hot rodding, but I bleed early air-cooled Volkswagens. Combine that with my "day job" of being surrounded by high end muscle cars and it means that I pretty much I have a camera surgically attached to my hand which keeps a smile on my face. Find Chadly on Facebook and Instagram: https://www.facebook.com/ChadlyJohnsonPhotography/ "Chadly Johnson" on Instagram.