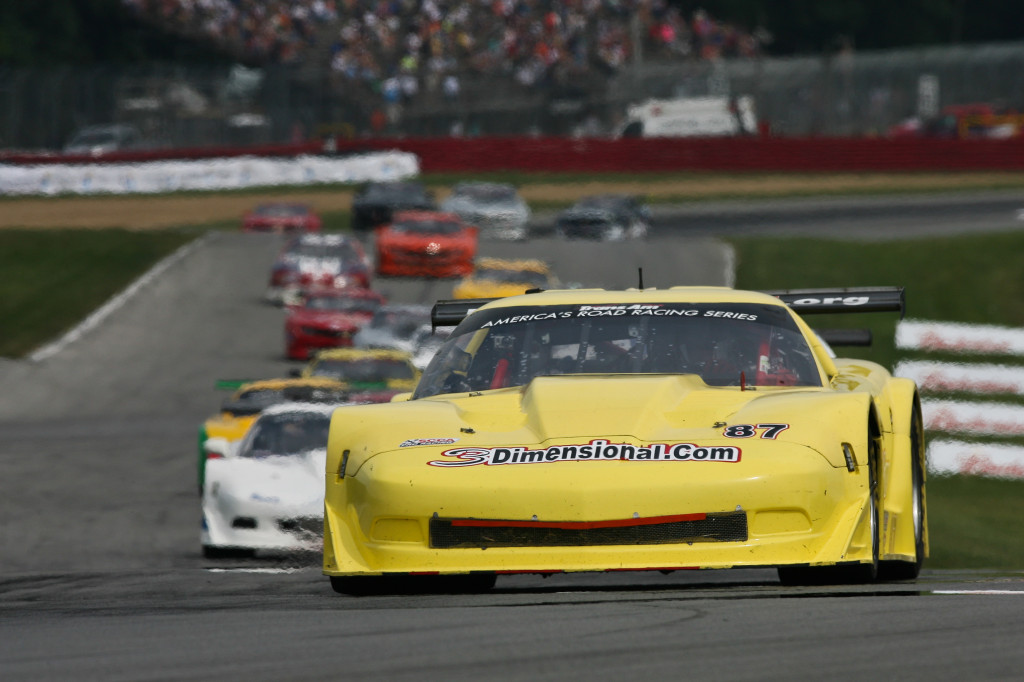 The 3-Dimensional Services Next Dimension 100 is coming to the Mid-Ohio Sports Car Course this weekend with a 59-car field (near a record high for the Trans Am series).  It’s a race the series is calling 47 years in the making due to this near-record participation, the highest since 1967 when names like Gregg, Posey, Titus and Donohue were on the leaderboard.

The name “Trans Am” has always been associated with those feelings, the impending shiver down the back of your neck as sixty cars fire up after those special words “drivers start your engines.”   From the original production-based pony cars to the famous GT supercars of the 80’s, 90’s and early 2000’s, Trans Am has always delivered that spectacle; and for that it holds a special place for fans of road racing and motorsports.

Coming into the 3-Dimensional Services Next Dimension 100, all three Trans Am classes (TA, TA2 and TA3) have new record setting members: Lawrence, Gregg, Ruman, Peterson, Andretti, Cassaro, Stretch, and some who are more recent arrivals to the Series:  Keith, Stokey, Dillon, Napieralski, McAleese and Berkeley.

The standard bearing TA class is powered by 850-plus horsepower engines in a platform that has been refined race after race, decade after decade, engineered into true performance machines.  21 of these ground pounders will be on display.

Joining them for the first time will be Bruce Nesbit, Joe Napoleon, Justin Napoleon, Aaron Quine and Allen Milarcik, all making their Trans Am debuts in TA2, helping the TA2 class reach an all-time high and joining a Trans Am rookie class already 18 drivers strong.

TA3 will also feature a record entry of its own with the American Muscle Group featuring a 10-car show, with two-time defending Champion Chuck Cassaro, driving the No.  76 StackData/ Aeromotive/ Metallica Ford Mustang, hanging on to a one point lead over rookie Ernie Francis, Jr., in the No.  9 Breathless Performance Chevrolet Camaro.   Dean Martin and Todd Napieralski will also feature with a threat to finish atop the podium.

TA3 International will also be active with current points leader Russ Snow, in the #20 Carbotech Chevrolet Corvette,  and Jason Berkeley, in the 67 BMG Investments Chevrolet Corvette,  pitted against Clint Sawinski, in the No.  94 Temp Air Porsche Super Cup, and Jerry Greene, in the No. 93 Ever Greene Jewlery Porsche GT3 Cup.  Berkeley and Snow are both within the Championship hunt and a strong outing would go a long way towards either increasing Snow’s lead or closing the gap for Berkeley.

Trans Am will take to the track four times throughout the weekend, with two practices at 10:30 a.m. EDT and 12:30 p.m. on Friday August 15, with qualifying at 4:45 p.m. later that afternoon.   Finally, The 3-Dimensional Services Next Dimension 100 will take place at noon on Saturday, August 16.

Before sessions, Trans Am encourages all fans to visit the cars and drivers in person, with all tickets serving as a cold pass to the Trans Am paddock.  The Series will also be conducting a drivers’ autograph session at 9:30 a.m. on Saturday, with open attendance for all.

With only four more events before the end of the season, this is a highlight of the year for these drivers and for fans.  The festivities kick off on Thursday with registration and the track walk.  Qualifying starts Friday.