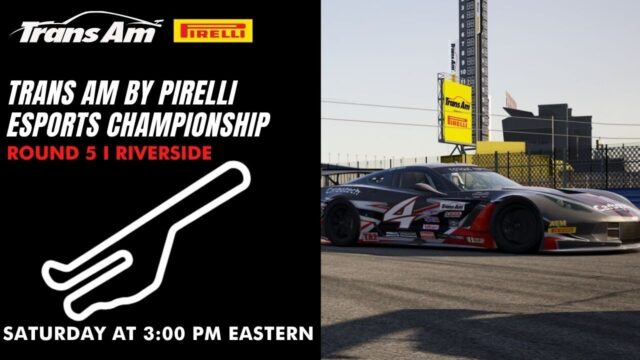 The Trans Am Series presented by Pirelli is returning to Riverside International Raceway (RIR), site of many enthralling contests between some of the biggest names in series history. It’s a virtual return, obviously, as the Southern California racetrack has been closed since July 2, 1989 and is now part of a large, faltering shopping area.

The eRace takes place on Saturday, May 30 at 3PM EDT and features some of the sport’s current and past competitors, along with at least one relative of a former winner. The virtual resurrection of RIR features the classic Riverside road course configuration, not the NASCAR version used by the stock cars.

Drivers will continue to race identically prepared Corvette C7.r GTLM machines on the ‘World’s Fastest Gamer – SIM edition’ JV with Torque Esports and Asset Corsa, for Round 5 of the esports championship. As Trans Am president John Clagett noted, “Many of the drivers on the esports roster were not even born yet when Trans Am hosted its last race at Riverside.

Mark Donohue won the 1969 race in Roger Penske’s Chevrolet Camaro, while Ford prevailed the following year with Parnelli Jones in Bud Moore’s Ford Mustang. Penske returned to the top steps of the podium in 1971 when George Follmer and Vic Elford combined for a 1-2 finish for Penske’s AMC Javelins.

Just a day before the race, the series announced David Donohue will be among the racers challenging current points leaders Josh Hurley, Tyler Kicera and reigning on-track champion Ernie Francis Jr. Combined, this trio has seven wins in eight rounds.

The return to Riverside features a swift qualifying, followed by two 20-minute main events, with the second round featuring an inverted field.

Fans can stream the action by downloading the free Trans Am by Pirelli Racing app (https://bit.ly/3dxc6Lg). The live stream is available on the series’ Facebook page (www.facebook.com/gotransam) and You Tube channel (https://www.youtube.com/user/TheTransAmSeries).