As the warriors of the NHRA raced into the second race of the all-new 2020 race season, three hard-working drivers brought the heat at a track known for some of the best drag racing in the desert. Picking up from where he left off, the first race of the season for 2019 Top Fuel world champion Steve Torrence once again landed him in the winner’s circle after taking down legendary driver Doug Kalitta in Sunday’s final round. Torrence wouldn’t be the only driver to earn his first victory of the 2020 season on Sunday. On his way to bettering his previous season’s performance, Don Schumacher Racing’s own Tommy Johnson, Jr. drove his MD Anderson Dodge Charger SRT Hellcat to the winner’s circle in an all-DSR battle against Jack Beckman’s Infinite Hero Dodge Charger SRT Hellcat at Sunday’s final round at the NHRA Arizona Nationals. The third driver to earn her first win of the 2020 Mello Yello NHRA Drag Racing season, 2019 Pro Stock champion Erica Enders, got her Elite Motorsports owner the best birthday present this weekend after outrunning 2017 world champion Bo Butner in Sunday’s final round 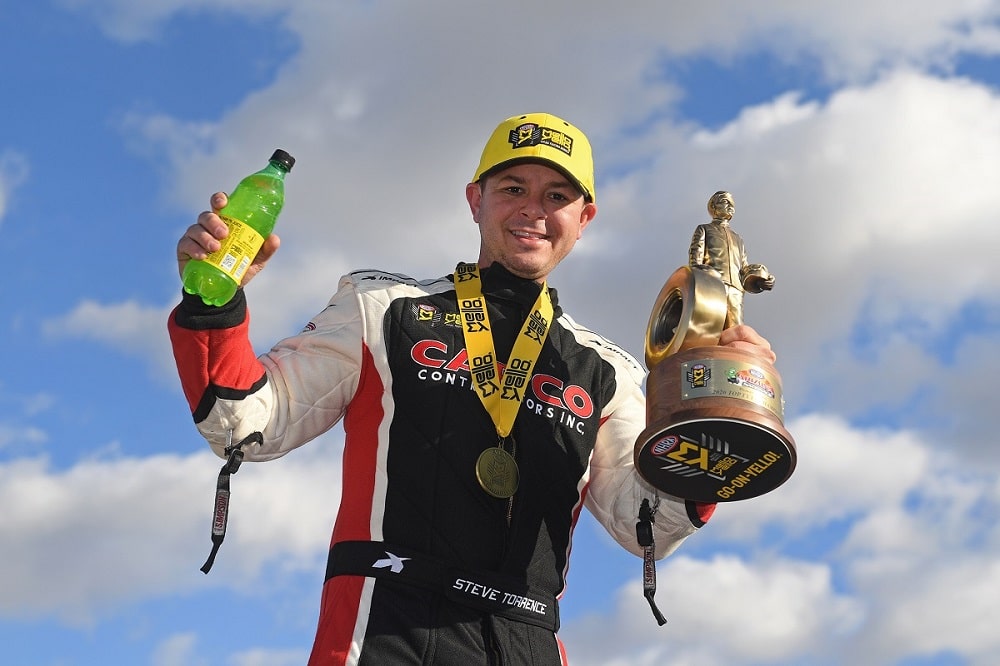 Despite missing out on the first race of the season, 2019 Top Fuel world champion Steve Torrence picked up right where he left off after qualifying second, just thousandths behind 2017 Top Fuel world champion Brittany Force, and taking this to a hard-fought battle and victory against James Maroney and former world champion Shawn Langdon in Sunday’s first two elimination rounds. Following his first two victories on Sunday, Torrence would have to take on 2018 NHRA Arizona Nationals Top Fuel victor, Billy Torrence in Sunday’s semifinal round. Although the patriarch of the Torrence Racing family would put up one heck of a fight Steve defeated his father in the semifinals with a better reaction time and a .001-second better elapsed time.

This victory would lead Steve Torrence to Sunday’s final elimination round against NHRA legend Doug Kalitta. Despite Kalitta also putting up one heck of a battle against drivers like No. 1 Top Fuel qualifier Brittany Force, Steve Torrence’s quickest run of the day, a 3.679-second pass at 321.27 MPH, landed this champion back in the winner’s circle in Arizona.

“That first round I had a bit of the jitters,” said Torrence. “We missed Pomona so this being the first round of the first race of the season I was a little bit nervous, but we proved that we are still the team to beat this season.” 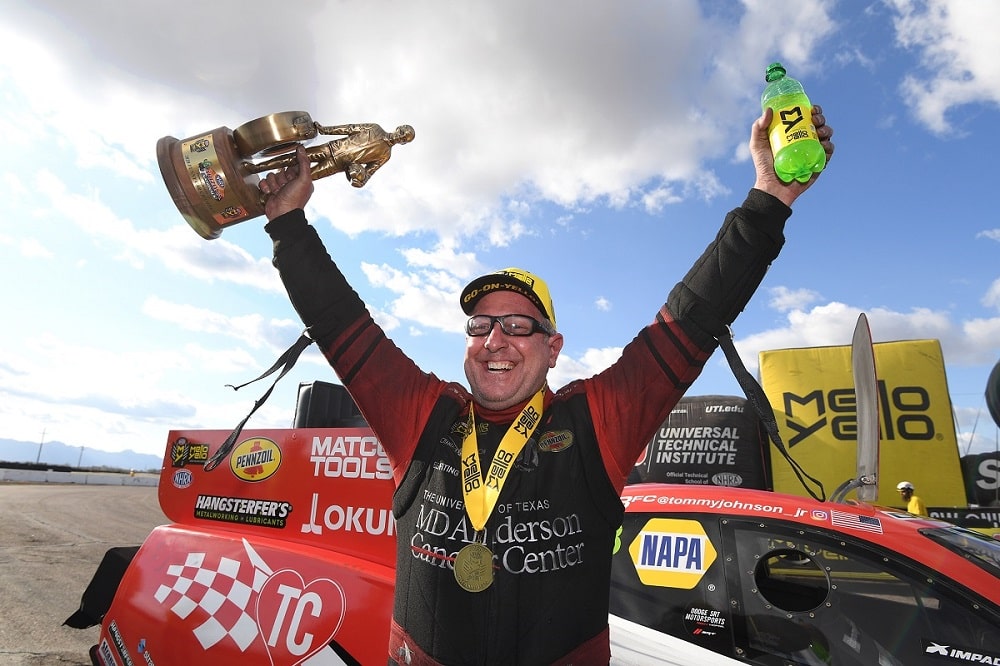 Despite the weekend starting off a little rocky for Don Schumacher Racing’s own Tommy Johnson, Jr., Sunday’s elimination rounds found both the driver and his team digging some great vibes after opening his race day with a win against Blake Alexander. This victory would be followed by a second-round win against Bob Tasca III in the second round and finally one of the most impressive semifinal wins of the weekend over Don Schumacher Racing teammate Ron Capps by just .003-seconds.

These impressive wins would give Johnson an opportunity to compete in one of the most unique final rounds of the season thus far. After pulling his MD Anderson Dodge Charger SRT Hellcat alongside Jack Beckman’s Infinite Hero Dodge Charger SRT Hellcat, Johnson ran a 3.883-second pass at 326.40 MPH, which easily defeated Beckman’s 6.156-second pass, which earned Johnson his first Wally since the 2019 Dodge Mile-High NHRA Nationals presented by Mopar in July.

“We had a great car this weekend,” said Johnson. “As a driver, going into each round knowing that you have a car that is going to perform makes your job a little easier, which also means a little less stress. I can’t thank my team for making this performance possible.” 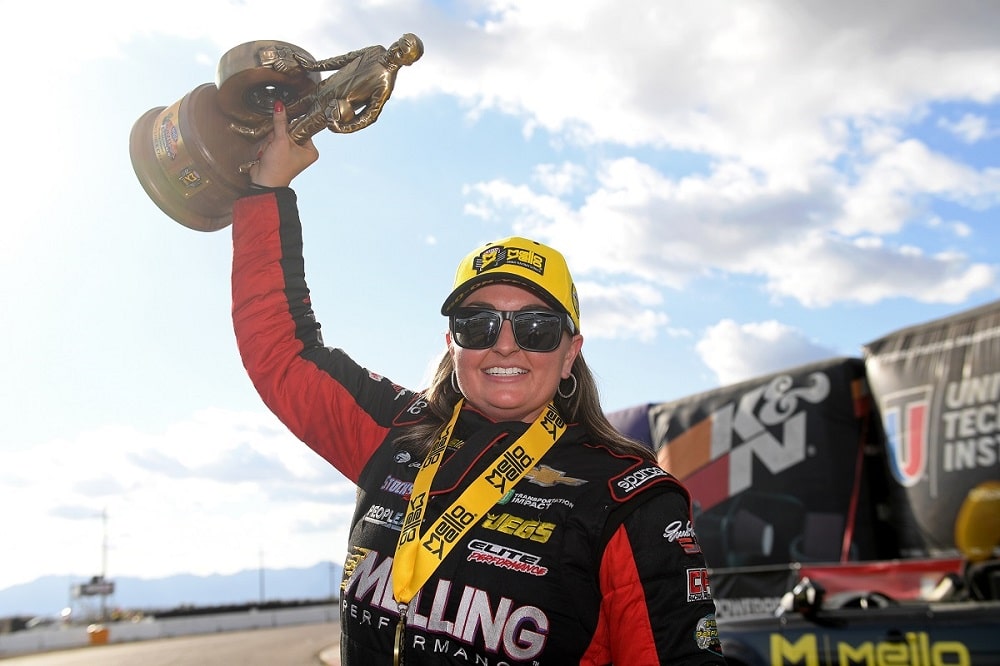 After qualifying second in her Melling Performance Chevy Camaro, Enders defeated Chris McGaha and Jason Line before lining up against Butner in the 52nd final round of her career. Thanks to a 6.531-second pass at 210.44 MPH, Enders went on to win for the 26th time in a Pro Stock event, evening her career record in the category to 26-26.

“I would have to say that this weekend was excellent,” said Enders. “The guys gave me a tremendous race car this weekend, very consistent, very fast and we just crushed the competition and it was really fun.”

4 Comments on Torrence, Johnson and Enders Bring the Heat at NHRA Arizona Nationals