The third of six playoff events in the NHRA’s Countdown to the Championship, at the AAA Insurance NHRA Midwest Nationals at Gateway Motorsports Park, gave two high-performing drivers a chance to power to their eighth victories of the 2017 season as well as a comfortable point lead in their respective categories. 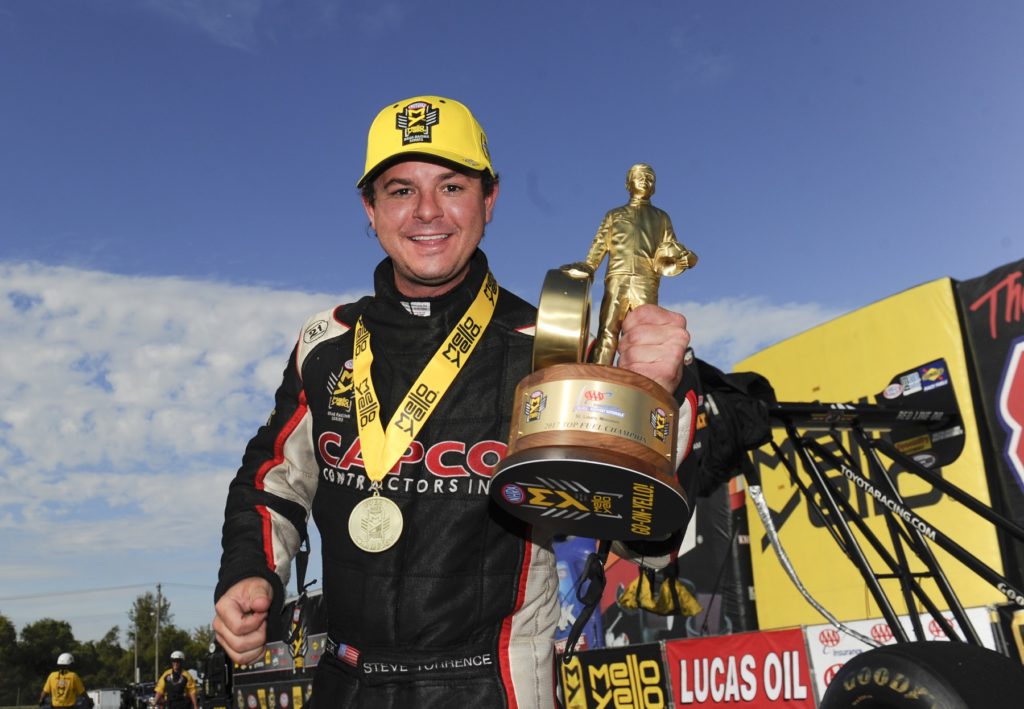 Top Fuel points leader Steve Torrence may have started the weekend off in a seventh-place qualifying position, but this hard-working driver and his Torrence Racing team made just the adjustments needed to take down Shawn Langdon, Leah Pritchett and defending world champion Antron Brown and move on to his 11th final round of the season. The impressive wins continued on Sunday as Torrence lined up against NHRA Carolina Nationals winner Doug Kalitta. With a 3.684-second pass at 329.34 MPH in his Capco Contractors/Torrence Racing dragster, Torrence took down Kalitta’s 3.698-second pass to double his career victories this season, with a total of 16 Wally trophies, while also walking away with the current Top Fuel points lead.

“We got here by doing what we do all year long and doing it ourselves,” said Torrence. “The whole weekend I just kept thinking… ‘You are going to have to come in here and do everything you can to get every possible point, because this thing could come down to one or two points at the end of the season.’ Now we are leaving here with a bigger points lead as well as another trophy.”

Along with an astonishing number of wins, Torrence currently holds a 42-point lead over his fellow Midwest Nationals finalist Doug Kalitta going into the upcoming Fall Nationals. 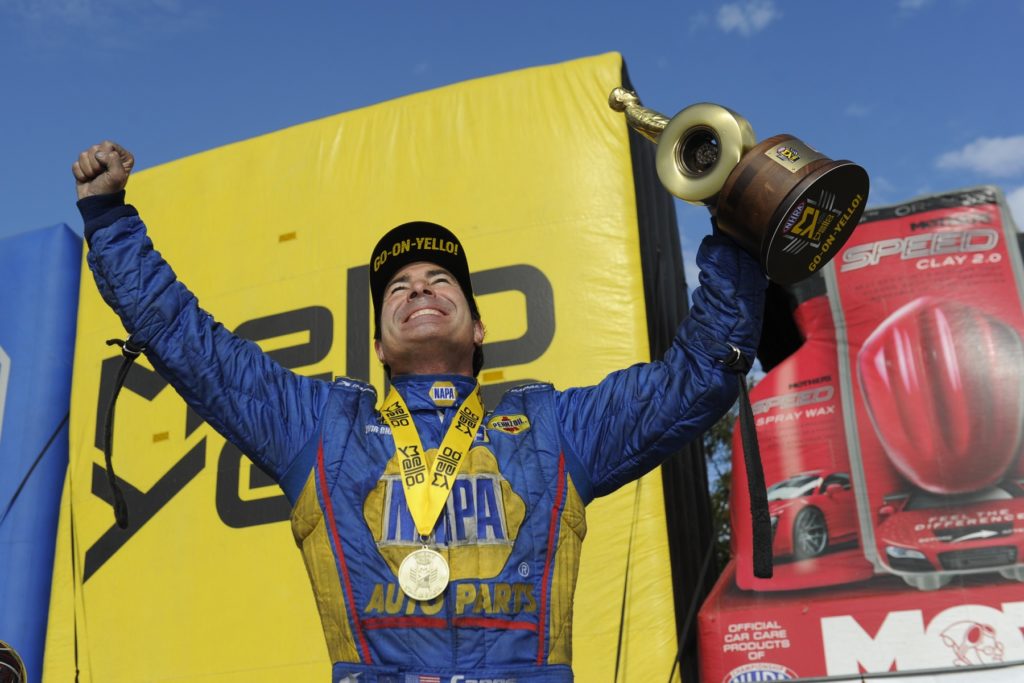 Torrence wouldn’t be the only driver to pick-up his eighth Wally of the 2017 season. Much like his performance in last weekend’s Dodge Nationals, Ron Capps kicked off his weekend by qualifying third. After a few adjustments, the Don Schumacher Racing Funny Car warrior once again became the top-performing Funny Car driver after defeating Jim Campbell, teammate Jack Beckman and 16-time world champion John Force to move on to his tenth final round of the 2017 season.

The final round would pair Capps up alongside NHRA Funny Car rookie driver Johnnie Lindberg. Although the rookie put up his best attempt during Sunday’s final elimination round, Capps showed this young driver how it is done with a 3.879-second pass at 331.53 MPH in his NAPA Auto Parts Dodge Charger R/T to secure his category-best eighth victory of the season and 58th of his career. Thanks to this win, Capps maintains the Funny Car Championship points lead as he continues to pursue back-to-back world championships.

“Although I am excited to be here, I refuse to kid myself that the toughest cars in this Countdown Chase are the ones that made it,” said Capps. “We fear those who didn’t make it so much more because they are just out here for wins. This is why we are just trying to get as many points as we can get right now.”

Thanks to this win, Capps continues to retain a 46-point lead over John Force Racing driver Robert Hight going into Texas. 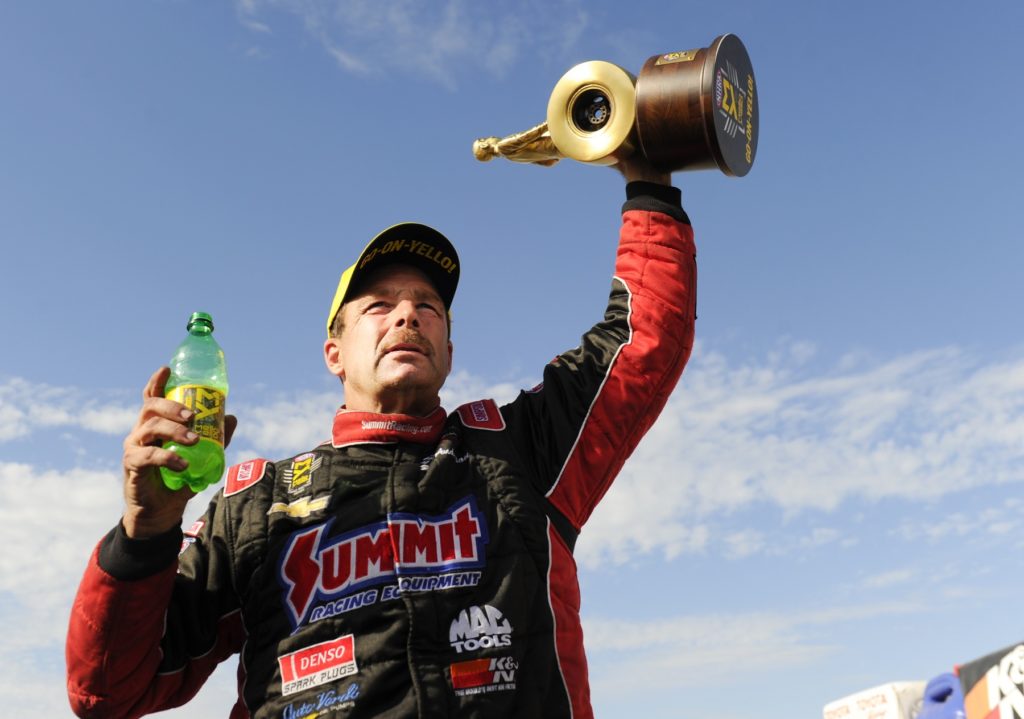 While Torrence and Capps earned their eighth victories of the season, Pro Stock driver Greg Anderson earned his third Wally trophy of the 2017 season at Gateway Motorsports Park.

Unlike Torrence and Capps, who had to race their way to the top, Anderson was this weekend’s No. 1 qualifier in the Pro Stock division. After a successful start, the KB Racing driver also gained victories against Dave River, Larry Morgan and Brian Self before reaching his 10th final round of 2017.

In Sunday’s unique final elimination round, which featured two KB Racing drivers going head-to-head, Anderson was forced to take down teammate and former world champion Jason Line. With a 6.571-second pass at 210.73 MPH in his Summit Racing Equipment Chevy Camaro, Anderson both defeated his teammate and earned his 89th career victory.

“It’s hard to win out here,” said Anderson. “I knew that I was in deep in the final and knew it was going to take a stroke of luck to win it. The truth is, it has been an up and down kind of year, but you have to peak going into the playoffs and obviously I have.”

This win also gave Anderson the points lead in the current Countdown to the 2017 NHRA Pro Stock Championship.

The 2017 NHRA Mello Yello Drag Racing Series Countdown to the Championship continues with the AAA Texas NHRA FallNationals at Texas Motorplex , in Dallas, Texas, October 12 –15, 2017. Stay tuned to RacingJunk.com for all your NHRA coverage!