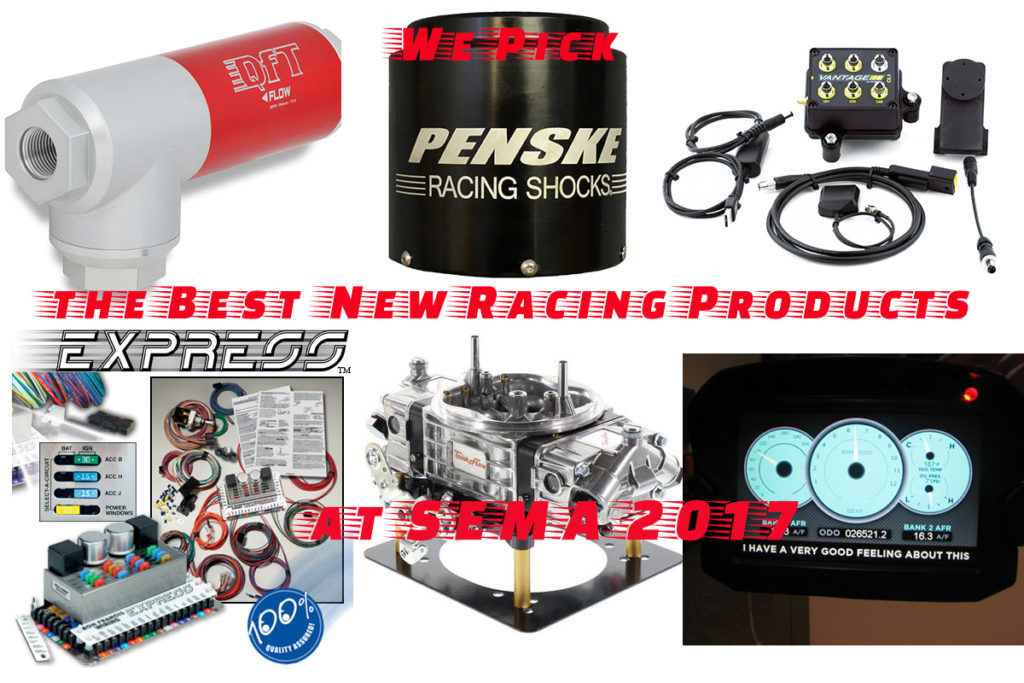 Wiring up a new race car from scratch can be a pain in neck. New attendee Ron Francis Wiring makes wiring up your race car a snap with their Express Race Wiring System. These race-only wiring harness kits are available for vehicles powered by Ford, GM, and Dodge/Chrysler engines. It has 16 separate fused circuits and four relays, ensuring that you’ve got enough separate circuits to wire your whole car without having to piggy-back circuits which can cause shorts and system overloads. There’s even a multi-connection battery junction block so you can decrease the number of octopus legs going every which way for your custom add-ons.

Each of the 16 fused circuits (with two piggy-backed for a total of 18 circuits) have color-coded and printed wires making circuit identification a snap. Unlike some other wiring harness kits, Ron Francis kits come with all the connectors and instructions that you need to easily and (relatively) quickly wire up your strip burner. Sixteen circuits mean you’ll have the separate circuits required by some sanctioning bodies, allowing your car to pass inspection and still have extra to add circuits and accessories later. There’s even an isolated relay for your cooling fan for those that drive road courses, rally, and autocross.

The Express Race Wiring System is designed with a new style terminal block to make connecting the hi-temp fire resistant wires t the fuse block quicker and easier than ever before. It will allow wiring up a full gauge cluster as well as steering columns from ididit, Flaming River, and GM, and aftermarket HEI and points-style distributors. So you can pass any safety inspection, there’s also enough to wire up all required lighting as well as neutral safety switches. Plus, there’s a high quality headlight switch with wiring included in the kit.

Quick Fuel’s EFI Filter Regulator was selected by the SEMA judges as one of the best new products for racing applications that was introduced at this year’s show. It accepts fuel line up to half inch with -8 AN fittings on both inlet and outlet, can flow up to 175 gallons per hour (GPH), and has a ten micron filter built in. The body is made of clear and black anodized aluminum, making it strong, lightweight, and resistant to corrosion.

One of the hardest parts of converting your carbureted or non-return EFI system to a return-type EFI is plumbing the return line. Quick Fuel addressed that problem with this regulator with a filter and return line built-in. This allows the regulator to be mounted near the fuel cell, easing your installation/conversion woes considerably. The regulator is preset at 59.5 PSI so it matches up with most racing EFI systems on the market.

The new Air Dump Assembly from Penske Racing Shocks allows you to create a spring curve that is digressive using any common spring. A digressive curve is one that starts hard and gets softer as the jounce continues. This means that small suspension oscillations will keep the suspension feeling stiff and in control but large oscillations will feel softer and less jarring. Penske tested the device for two years in NHRA competition and had excellent success with it and now they’re moving out to other racing applications.

This device is excellent for getting instant traction with your race car by allowing you to run a stiffer spring rate. The Air Dump Assembly counteracts the stiffer spring as it compresses, helping you to achieve/retain more traction as you move down the track. What happens with this device is that as the stiffer spring compresses, the load on the spring becomes more powerful as compared to the load the air assembly is producing. The air dump gives way when this happens and two full inches of the spring preload are taken up by the assembly, essentially reducing the spring rate of that stiffer spring and keeping your drive wheels in full contact with the track.

The new products review gods with SEMA awarded the Racepak Vantage CL1 Data Kit as “Best New Product for SEMA 2017 in two categories-Best New Engineered Product and Best New Performance-Racing Product. The Vantage CL Data Kit is advertised by Racepak to be “the most advanced, yet intuitive karting data system available.” Combined with Racepak’s excellent D3 Karting App and their kart mounted CL1 data box you get an unprecedented amount of connectivity, control, and monitoring capabilities.

The groundbreaking part of this product set is where it connects via Bluetooth on your cellphone. What happens is that after you pair the sensors with the data box and the cellphone, all the data captured by the sensors is sent to and displayed on the D3 app-equipped mobile device. This includes your lap times.

Using your mobile device’s data connection, this information is then seamlessly sent to Racepak’s CL1 cloud. Your team’s engineer’s and builders can then monitor this data from anywhere in the world. Once you hit the pits or the garage, the data, all of which is stored on the mobile device can be downloaded and analyzed to see where improvements can be made.

The two main drawbacks to the system are that you’ve got to subscribe to Racepak’s cloud service and the app is only coded for Android and iOS devices. The people we spoke with at SEMA inform us that there are no plans to port the app to the Windows mobile operating systems at this time. The CL1 Data Pak can also be used in the NHRA’s Junior Dragster Divisions.

The Trick Flow Specialties Track Heat Pro carburetors are excellent carburetors for racing applications. However, if you’ve wanted to use them on alcohol applications, you’ve had to go through a lengthy and troublesome process of converting and calibrating them to get them to work properly. Not anymore.

Trick Fuel by Quick Flow Technology introduced their new Track Heat® Pro Alcohol Carburetors. These 850 cfm and 950 cfm race-only carbs are pre-calibrated for use in alcohol-fueled drag racers meaning they are basically “install and go” parts. No more hassle and time lost spent recalibrating a carburetor to be used in an alcohol racing application.

The Pro Alcohol Carbs are equipped with mechanical secondaries and have no choke. The main bodies are designed to be high flow and have blended venturies to make the airflow through the carbs into the intake smoother. To make the carbs almost infinitely tune able, Trick Flow equipped the carburetors with screw-in idle air bleeds, high speed air bleeds, and accelerator pump nozzles.

They also designed the CNC-machined metering blocks with emulsion bleeds with four stages. This means better throttle response for you and a fuel performance curve that is much smoother. Just for good measure, they have also been equipped with downleg boosters and dual fuel inlets. The box also has additional links to give you more ability to tune exactly when those mechanical secondaries open up and the rate at which they open.

Both the CD-5 and the CD-7 digital dash displays are available with 800 X 480 full color displays that measure seven inches diagonally in black powder-coated enclosures. They’re also available in five in displays with flow-molded carbon fiber composite housings. For those that want to make full use of the data logging functionality, you can add 200 megabytes of storage.

The displays are designed to be bright enough to see in full sunlight or under the arc lights for night racing. Making them even more viewable in all lighting conditions, the enclosures are designed with sizable shade hoods and the displays have integrated glare diffusers. This combination gives them a 1000cd (candlepower) brightness so that even if you’re using a tinted visor on your helmet because of the blinding sunlight, you’ll always be able to see the display clearly.

Both digital dashes are able to accept channels from two CAN bus connectors that are user programmable. This gives them the ability to work side-by-side with AEMnet enabled devises and third party devices at the same time. For carbureted applications, you can install AEM’s 22 channel CAN Sensor Module to add even more channels to the dash via the AEMnet CAN. For CAN to CAN communications, there’s no need for external modules since they are ECU CAN bus ready.

For those that need to monitor pit road speeds, both the CD-5 and the CD-7 have a row of seven LEDs across the top that are ultra-bright and give you the ability to monitor pit speed via RPM monitoring as well as shift point notifications. These LEDs are user programmable to serve multiple uses. Acknowledging that gloves can make us clumsy, AEM added two large buttons on the face so we can page through the display pages and reset the unit’s memory without having to take our gloves off.