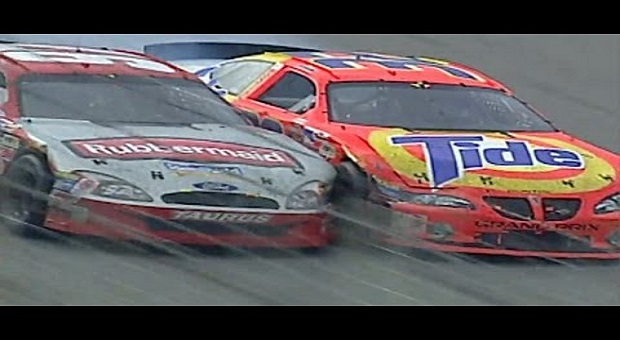 It seems to be a fact of modern life that racing can be, well, a little boring at times. Increasing budgets, stringent rules, more technology have the effect of taming races and making them a little processional. Sometimes, the leader sprints off from the beginning and isn’t challenged at any point during what appears to be a very quick parade. Thankfully, these instances aren’t always the case and just to prove that motorsports can still be exciting and jaw-dropping, we’ve complied the following list of the ten most spectacular finishes in motorsports. Be it wheel-banging at 150 mph or motors blowing over the finish line, these drivers take commitment to another level.

We’ll start our list with some good ol’ drag racing. Top Fuel dragsters always provide a spectacle for the audience, and even though the races are short, they tend to get the fans out of their seats. This example showcases just how dramatic a show these monsters can put on. Here, Richie Crampton just nudges his Lucas Oil Racing dragster ahead of Larry Dixon’s exploding ride. Completing the quarter-mile in 3.738 seconds at 318 mph is impressive, but even more so when your competitor is exploding, weaving and nearly collecting you!

Here, Ayrton Senna shows Nigel Mansell the depth of his resolve. Eeking out a decent initial lead from Mansell, Senna continues to push as the brave Briton whittles down the gap. The final lap sees Mansell close the gap to 1.5 seconds and cannot stage a pass until the final corner where a bit of gutsy braking puts him right underneath the Brazilian’s gearbox. With tons of turbocharged power on tap, the two commence a drag race down the start-finish straight with Senna weaving left and right to keep the Briton behind, resulting in Formula One’s closest finish ever.

I never tire of watching this video, which shows why sports car racing is so exciting. With lots of mechanical grip and tons of torque, the GT category of racing can provide some amazing spectacles, especially when you’ve got two top drivers behind the wheel. Jan Magnussen and his Corvette C6R go wheel-to-wheel with Joerg Bergmeister in his Porsche GT3 RSR at the 2009 ALMS race at Laguna Seca. Magnussen’s Corvette is clearly the quicker car but Bergmeister, after having lost a race in a similar situation the year before, is intent on staying in front. With several spectacular overtakes involving slower traffic, a bit of sportive rubbing and some outright dangerous behavior, this is a completely exhilarating clip that ends in tears.

This battle between two American open-wheel greats is not short on excitement. With a daring, if ill-advised overtaking move, Danny Sullivan goes too low at Indianapolis and spins immediately after passing Mario Andretti. With lighting reactions, Andretti manages to avoid the spinning Sullivan, who does his best at avoiding the wall. Considering this is all done at 200 mph is impressive, but what’s even better is Sullivan’s charge and attempt at overtaking again at the same corner.

Gilles Villeneuve will go down in history as one of the truest fighters in Formula One. Never a brilliant tactician, the small French-Canadian was supremely brave and possessed car control that astounded the best. This particular clip shows a determined Villeneuve in his scarlet Ferrari overtaking and banging wheels with the seriously quick Frenchman Rene Arnoux in the turbocharged Renault. Arnoux, with a marked power advantage, sails past Gilles on the straight but with a daring display of late-braking, the Ferrari regains the lead with the front wheels locked solid. Tough but fair, these two exchange positions several times, somehow avoiding serious damage, seriously entertaining the audience and cementing Villeneuve’s legacy.

DHL Funny Car driver Del Worsham shows some serious grit as he keeps his foot down and beats Matt Hagan at the 2015 AAA Insurance NHRA Midwest Nationals in St. Louis, Missouri. Had his motor been just a bit weaker, the finish may have been different.  Crossing the line in 3.96 seconds at 320 mph while on fire, Del Worsham shows he’s made of stronger stuff.

Canada’s James Hinchcliffe showed he’s not just a funny guy, he’s a capable wheel-to-wheel racer in the final laps of the Sao Paulo Indycar race two years back. Waiting patiently, Hinchcliffe first pounces on the young upstart Josef Newgarden and then moves on to the race leader, Japan’s Takuma Sato. The Canadian drives cleanly and smoothly, conserving his tires and waiting for a mistake. In the final corner, James forces Sato into locking his brakes in a defensive maneuver. The Canadian makes a superlative over-under move on the Japanese driver and clinches the win with style.

V8 Supercars, with huge torque and only a moderate amount of grip, offer a great racing spectacle, especially on the slippery Adelaide street circuit. Former home of the Formula One Australian Grand Prix, Adelaide offers a series of tight, challenging corners coupled with super long straights, making for a unique driving experience. Here, we get to see a great exchange between two top-tier drivers, giving one another just enough space to get through the corner but nothing more. Scott McLaughlin uses all his skills and a calm mindset to get the best of a wheelspining, aggressive-but-fair Jamie Whincup. Changing positions in almost every corner, the winner isn’t certain until the finish line.

Though V8 Supercar allows a bit of gentlemanly fender rubbing, these two NASCAR stars taking the axiom “rubbing is racing” to another level.  Putting themselves high, low, sideways and nearly into the wall, Ricky Craven crosses the finish line in a plume of tire smoke as the two drivers interlock and somehow avoid a huge incident.

When people complain about single-seater racing getting dull, I have to show them this video. Gabby Chavez, Carlos Munoz, Peter Dempsey and Sage Karam cross the finish line four-wide, separated by .0026 of a second. Utilizing the slip stream perfectly, Dempsey comes from fourth to just put his nose ahead of his competitors and shows his intelligence behind the wheel. Without question, this kid deserves an Indycar ride! With the other competitors weaving and nearly touching, it could’ve ended in tears, but in the end it was a finish that was so close it looked staged.