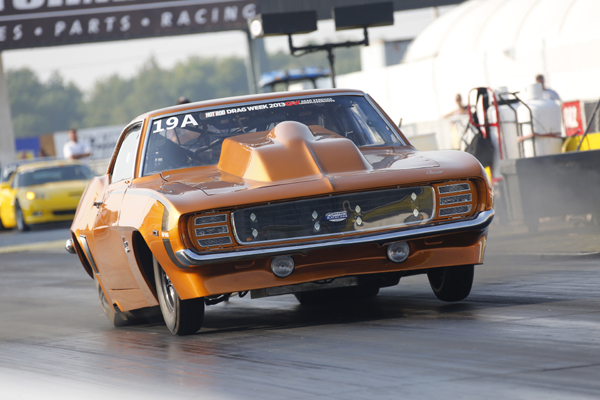 Those of us who are into drag racing, know that it’s difficult to have an extremely fast car that can be driven on the street AND racetrack. Recently, however, Tom Bailey, from Lake Orion, Michigan, blurred the line between full-race and full-street while competing at Hot Rod Magazine’s Drag Week event this past September. Bailey’s “street” ’69 Camaro ran 6-second quarter mile passes, five consecutive times, earning the title of the Fastest Street Car in America.

Bailey was one of many competitors at Hot Rod Magazine’s Drag Week, where real world race cars hit the road in a grueling test of streetablity and performance.  In order to prove who has the Fastest Street Car in America, competitors must complete five races at four different drag strips in five days. This tests the limits of their race cars with 1,000-plus miles of highways and back roads in-between, and no support vehicles or trailers.

Out of 230 cars only 173 were able to complete the trip this year and only one of them was able to lead the pack and win the title of Hot Rod’s Fastest Street Car in America. Tom Bailey is the first man in the history of Drag Week to run 6-second ET’s at every track and cruise the 1,200 miles in his Holley EFI equipped ’69 Camaro with less trouble than most hot rodders experience along the way to the local cruise night.

Day one of Drag Week at began at Holley’s LS Fest in Bowling Green, KY, where Tom Bailey ran a 6.72, the quickest ever ET in Drag Week history. During drag week he averaged 6.83 seconds in the 1/4 mile over the 5 days and 213mph. The fastest he ran was a 6.70 and 217 mph. He’s the first car to ever run a 6-second pass on each of the five days and the first to ever have a 6-second average. Tom broke the records for both times and speeds. Hot Rod Magazine Chieftain and Drag Week creator, David Freiburger, sums up Tom Bailey’s last 6-second pass as “one of the biggest accomplishments in all of Motorsports. That thing just drove 1,200 miles and ran 6’s five times in a row!”

“The great thing about this event is that you have to prove your cars street ability every day,” says Tom Bailey.  “After racing in the morning you have to pack up your car and drive it 200-300 miles to the next track with no support vehicles to help. So the car that just ran a 6 second quarter mile is now driving down the road to the next track!” Bailey prides his car as being the bulletproof package. “We didn’t change anything for the drive. Same tires, radiator, engine components, everything! And it performs like a daily driver.”

Bailey’s ’69 Camaro has a composite body and full tube chassis with struts. It runs a massive Steve Morris 615ci BBC with Brodix 14-defgree heads, a brand new Holley Dominator EFI system and a hypercontrol boost controller. With two 94mm Precision turbos, Bailey’s Camaro dynoed at 2,200 hp to the rear wheels! He runs a pro torque converter with a Rossler Turbo 400 trans and a Gear Vendors under/overdrive. “It’s got monster 35-inch tall tires, 3.89 gears and gets a very impressive 12 miles per gallon!,” he says.

Without a doubt, Bailey and his team are just scratching the surface of the potential of this combination. Hailing from Lake Orion, MI, Bailey’s racing team consists of his wife Dana, and sons Zack, Brendan, and Aydan.  Along with help from friends, Bailey credits Steve Morris on the engine, Ron Wesley on the chassis, and Rick Johnson on wiring.

The most significant change that Bailey made to his Camaro since competing in last year’s Drag Week, is the addition of the Holley Dominator EFI.  He chose the Holley EFI system due to the reliability and consistency. “It is not quirky like a lot of systems out there. Once you have it setup and going, it is easy to make subtle changes to help with fuel mileage or performance. The touch screen mounted in the car is great because it adds to the ease of use, as well as provides 6 more gauges to monitor as you drive down the road,” he says.  Bailey and his team are planning several more events this year and are excited to see how far they can take this amazing combination.