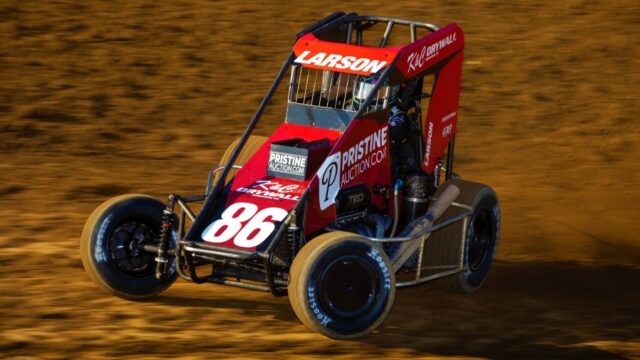 Richard and Jennifer Marshall of Priority Aviation have posted a bounty on Kyle Larson for the remainder of 2020 Indiana Midget Week June 17-21, starting with round two, at Gas City I-69 Speedway.

The Marshalls got things started and already have posted the first $1,000 of the bounty. However, If Larson doesn’t win the USAC NOS Energy Drink National Midget feature on a certain night, the winner of that night’s feature will collect a minimum extra $1,000.  If Larson does win the Midget feature, the money will be donated to the Indiana Donor Network in Larson’s name.  This will continue all throughout the ensuing five nights of Indiana Midget Week Wednesday at Gas City, Thursday and Friday at Lincoln Park Speedway in Putnamville, Saturday at Lawrenceburg Speedway and Sunday at Kokomo Speedway.

If you would like to contribute money toward the Kyle Larson bounty, you may submit your payment to USAC’s PayPal at www.paypal.me/usacnation.

Larson has emerged as the early point leader of Indiana Midget Week following his first-round victory Tuesday at Paragon Speedway.  Larson (Elk Grove, Calif.) won the opening round to claim his sixth consecutive win behind the wheel between World of Outlaws, All Star and USAC NOS Energy Drink National Midget competition over the past week-and-a-half.

The victory also marked Larson’s eighth-straight victory when competing in a midget inside the United States, with victories in the final three USAC National Midget features to conclude the 2019 season in California at Placerville, Bakersfield and Ventura, then both nights of the Gateway Dirt Nationals in St. Louis, Mo. during the month of December.  He then promptly won his first two starts of 2020 in January with a prelim win and a final night triumph at the Chili Bowl Midget Nationals in Tulsa, Okla.

On Wednesday at Gas City, the pits open at 3pm Eastern, grandstands at 5pm and hot laps at 6:45pm.  The action, which also features sprint cars all throughout Indiana Midget Week, can be watched live on FloRacing at https://bit.ly/3cq8vhQ.