After a rain out last Saturday night, historic Bowman Gray Stadium finally kicked off its 67th season of racing with a sold out crowd and a look back into what made this short track a legend in home track racing on Saturday night.  The Hayes Jewelers 200 was not only the featured race, but the event that gave longtime fans a look back into what put The Madhouse into the history books.  The night’s well known Grand Marshall – legendary motorsports promoter, former President and General Manager of Charlotte Motor Speedway and avid supporter of a track that he calls the “best show in town”, Humpy Wheeler gave the command for competitors to start their engines.

The Madhouse Modified field was led to the wave of the green flag by another name that has been a staple at the famed ¼-mile – Myers, third generation Myers family racing driver Jason Myers.  The younger of the two Myers brother racing modified team led this race for the first 36 laps before older brother Burt took the lead.  Despite continued challenges from both his little brother as well as rival Junior Miller, older brother Burt was able to hang on to take home the checkers for his seventh opening night victory and 62nd win at Bowman Gray Stadium.

Not only did Burt continue to prove that a new season start just means more wins for him in a modified, but also added another win to the history books for his entire family. His brother Jason took second and Brandon Ward third.

“I love this race and always have since watching my dad compete,” said Myers.  “It’s funny because I knew that my brother Jason was going to be the car that I had to beat and when we left Walnut Cove today we knew that we had to finish one and two.  If I couldn’t win it I wanted him to, but I am glad that I was the one to do it.”

Similar to this feature race, the 40-lap Sportsman Series race was also dominated by a driver who has continued to prove that hard work will get you to the top.  Although starting this race in second, the No. 55 of Zack Ore quickly charged to the lead ahead of the No. 19 of Michael Adams on lap 15 and never looked back.  As Adams would continue to fall back in the field as the laps wound down, NASCAR K&N East Series rookie John Holleman, IV would try to hunt down race leader, Ore but would fall short as the checkered flag waved. 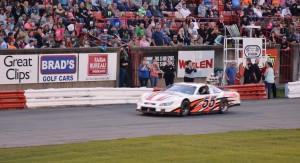 “My team and I have really worked hard all season to build a fast car and tonight we proved that hard work pays off,” said race winner Zack Ore.

“I tried to catch Zack,” said Holleman.  “We definitely had one of the faster cars in the field, but we just needed a few more laps.”

While the two feature races were more follow-the-leader than true hand to hand combat racing, the full moon hanging over the famed ¼ mile sure played havoc on the Street Stock Series. 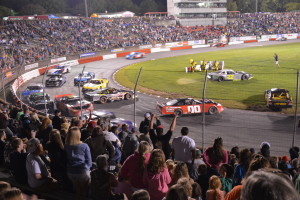 Led to the wave of the green flag by the No. 81 of Robert Lawson the No. 13 of Kevin Gilbert would push his way to first on lap two.  By lap four Gilbert’s lead would end along with the remaining top four cars who would wind up in a pile of twisted metal on lap four.

After the massive clean up and eventual restart, the 8 of K.J. Stimpson would take over the lead and what looked to be the race win before the No. 20 of Derrick “Fried Rice” Rice would give Stimpson a nudge in the final lap sending him spinning and handing the checkered flag over to Rice.

“I hate that I had to win this way,” said Rice.  “I really didn’t mean to spin Stimpson, it’s just the nature of short track racing.  I just hope that he can realize that and we not argue over this later.”

The Madhouse weekend warriors will resume racing next weekend at Bowman Gray Stadium.  For more information on this legendary short track visit bowmangrayracing.com.