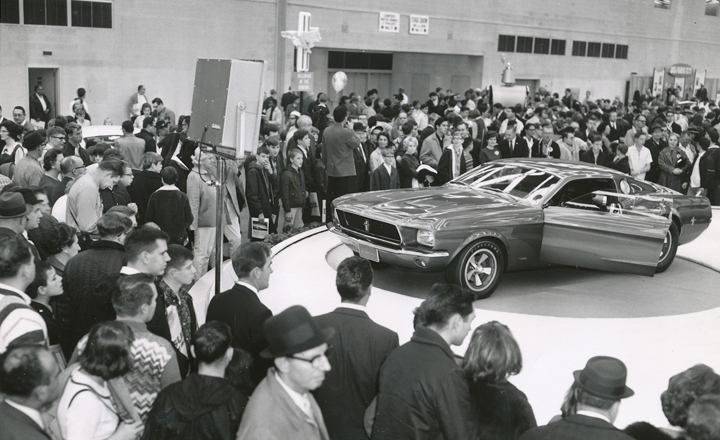 The iconic status of Ford’s Mustang—and even more so, the Mach 1 is undeniable. No other car can claim to be more popular—or sexier looking. But in 1967, it was simply a brand new car receiving a lot of pomp and circumstance. In this press photo of the 1967 Detroit Auto show, front and center is a strange-looking performance-oriented example of Ford’s pony car. The low-level roof line, square headlights, and one-off wheels provide proof that this is definitely a prototype. The Mach 1 concept was created to preview the 1968 model. Initially, the concept car had a front end that drew inspiration from the concept 1963 Mustang II. Later in the design phase, the Mach 1 designers developed a new grill area that was closer to resembling production Mustangs of the time. How cool would it have been, if the racing-style gas cap on the rear pillar would have been retained for production, and wow, wonder what those wheels would be worth today!

The Mach 1 moniker announced performance oriented Mustang offerings until the original retirement of the name in 1978. In 2003, the name once again adorned the Mustang as a high performance version of the SN95 platform. This generation of the Mach 1 was discontinued after the 2004 model year, with the introduction of the fifth-generation Mustang.