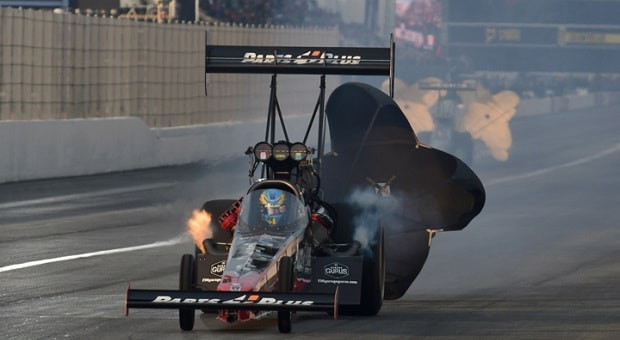 Is this the year of the smiling assassin in NHRA’s Top Fuel Mello Yello Drag Racing Series category? It sure looks that way.

After needing more than a decade to gain his first victory in the dragster class, last June Clay Millican earned a tears-laden Wally trophy at his home race in Bristol, Tennessee. Millican, always quick and fast – but until then never consistent enough to prevail in the final round – made his way to the Winner’s Circle to be lauded by competitors and fans for the first time in 254 starts.

The driver of the Doug Stringer’s Parts Plus/Great Clips 10,000-horsepower dragster, Millican earned six consecutive IHRA championships and 51 national event wins before starting his quest for NHRA glory. It took that long for Millican to get the right team working together and the right crew chief, former driver David Grubnic.

The Aussie ex-pat and the Kentucky kid have turned out to be a great fit in an arena where drivers and crew chiefs work closely together. Grubnic, who last sat in a Top Fuel car in competition back in April of 2014, was replaced at Kalitta Motorsports by J.R. Todd. Instead of going to another team, “Grubby” took his tuning talents to Doug Stringer and Clay Millican.

The pairing of Millican and Grubnic is scaring the big teams this year. As the series heads to Virginia Motorsports Park for the first race at Richmond since 2009 and the 10th contest of a 24-race season, this duo have won the last two events and look tough to beat – even for points leader Steve Torrence, whom they trail by a meager 25 points, owning two victories to Torrence’s three.

Only once in nine events to date has Millican failed to go beyond the first round of competition, and that fact alone tells the tale of this team’s success. Going rounds is what wins races and championships. Preparing to go rounds entails attention to people and parts. That this team, with a single dragster entry for Millican, is beating the mega-teams at their game says so much about the state of Top Fuel racing.

It’s commendable that two single-car teams are leading the standings and Don Schumacher Racing has a single Top Fuel victory (Leah Pritchett at Atlanta), while Doug Kalitta and Richie Crampton have each earned single wins for Kalitta Motorsports, a single victory for Brittany Force of John Force Racing in Houston… well, that speaks volumes. These two single-car teams have won more than half the races so far!

“It took me 19 years to get that first [win], then less than a year to that second one and less than two weeks to get the third,” Millican said. “I like this trend. It was pretty cool to have the team pull together and just keep turning those win lights on.”

Will the season turn around for the big guns? Not if Clay Millican and David Grubnic have their way. The intense Australian and the laconic Tennessean have found a bond in a series where winning is never an easy task.