For three and a half decades, The Great Race has been providing classic auto enthusiasts across North America with an exciting and unmatched spectacle of an event. It’s a timed endurance rally in which vintage and collectible vehicles attempt to arrive at a series of checkpoints as close to a predesignated time as possible. Each year’s course is different, but all are long and filled with amazing scenery. This year, the Race began in Buffalo, N.Y. on June 23 and will terminate Sunday July 1 – Canada Day, coincidentally – in Halifax, Nova Scotia for a total distance of close to 2,300 miles.

RJ’s reporters were able to experience some of The Great Race in person at the Bennington, Vt. stop. Arriving before the participating cars rolled through, we found quite a few classic autos parked around the venue, Hemmings Motor News, home of the title sponsor of this year’s Great Race. 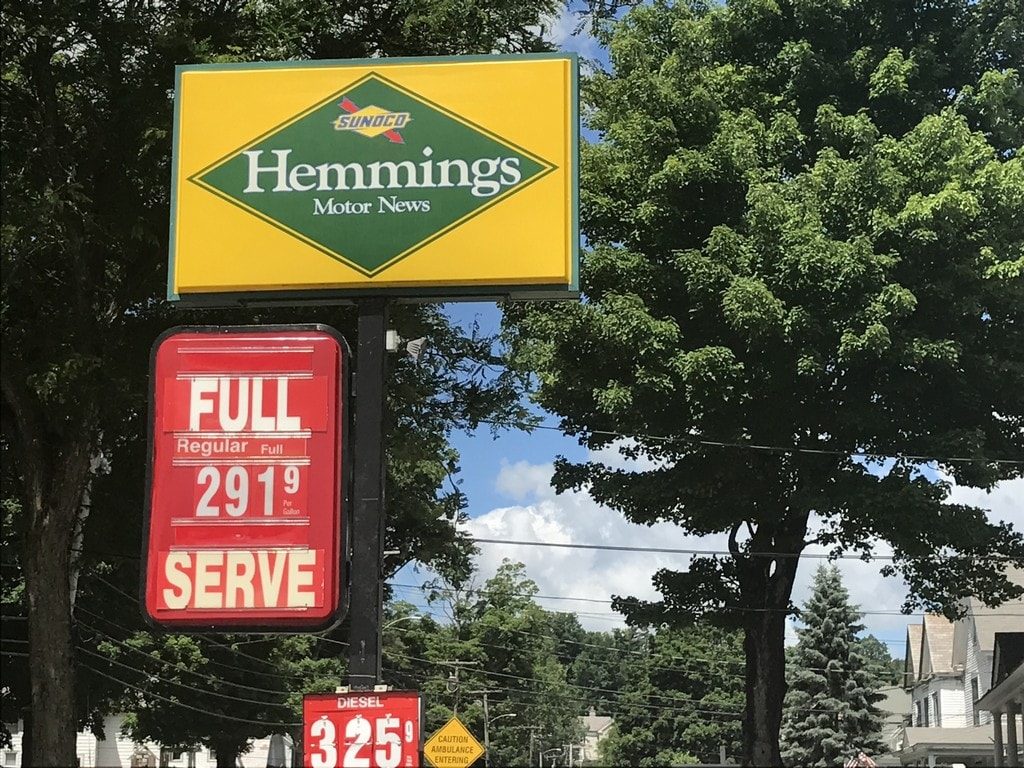 One highlight was a ’39 Ford Coupe from Naugatuck, Conn. With beautiful flaming done by the owner, bucket seats and a Lipstick Red leather interior, this was a hot rod in every sense of the word – a fact borne out by the powerful ’48 flathead V8 beneath the hood, accompanied by dual 94″ carbs. All work on the car had been done by the owner, Mike Maximenko, and his wife and friends. 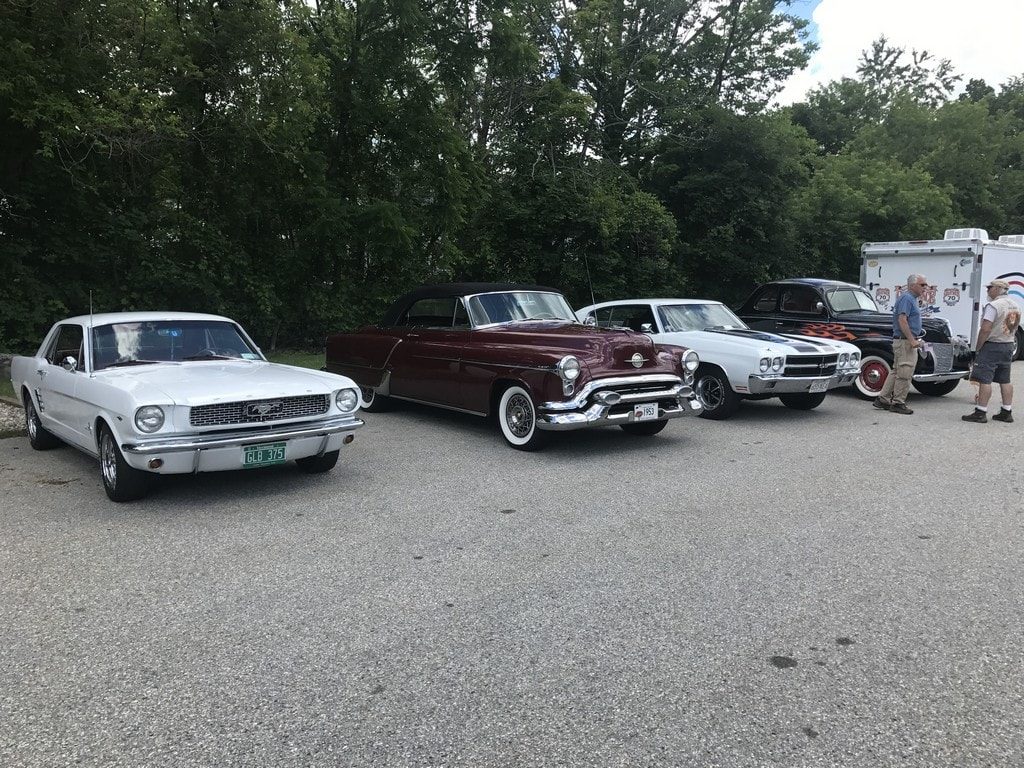 Other impressive autos included a pristine ’28 Roadster pickup with a wood bed, a gleaming ’53 Olds convertible, a ’37 Hudson painted in shining dark green and black, a charismatic Mustang and a sweet Chevelle SS. These gorgeous cars were joined by a very unusual vehicle indeed: a modern replica of a ’29 Ford Cretors popcorn truck, built on a Ford Model AA 1.5 ton chassis with an original 40 hp engine and genuine mechanical brakes. This Hemmings oddity was in use, too – event-goers could stop by the cheery red truck to pick up a generously sized portion of free popcorn. 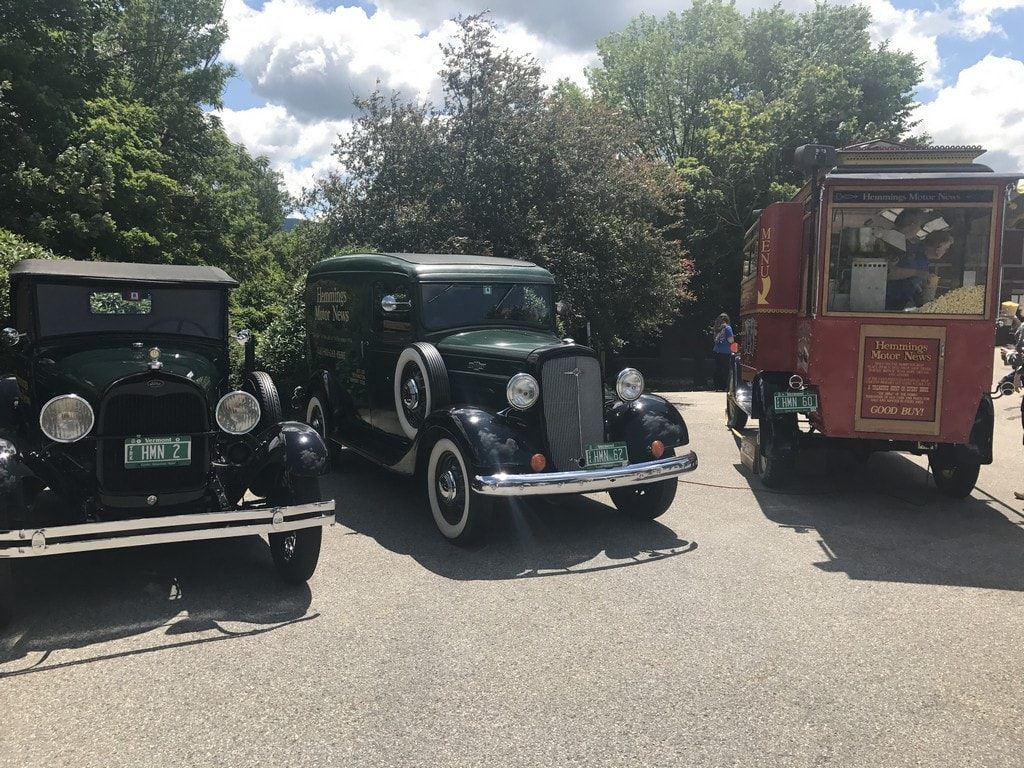 Drivers bring their cars from far and wide to participate in The Great Race, or even to watch it. We spotted a cool Kawasaki with a Florida license plate chilling in the parking lot before the main event. For fairness and variety, therefore, each year’s course is completely different from the previous year’s. The 2019 route will run from southern to northeastern California. The Great Race hasn’t visited Bennington, where we caught it, since 2011.

The basic rules are simple: Each car’s start time is recorded, and a series of subsequent times based on that are matched to many checkpoints along the course. The aim is to reach each checkpoint at precisely the predetermined time. Each second away from the ideal time adds points to a car’s score, so as in golf, the aim is to have as few points as possible. The best score last year was only 4.55 seconds off of perfect – pretty impressive, considering that there are over 60 checkpoints on the course! With a prize of $50K on the line, drivers and navigators do their very best to time their drives with pinpoint accuracy. 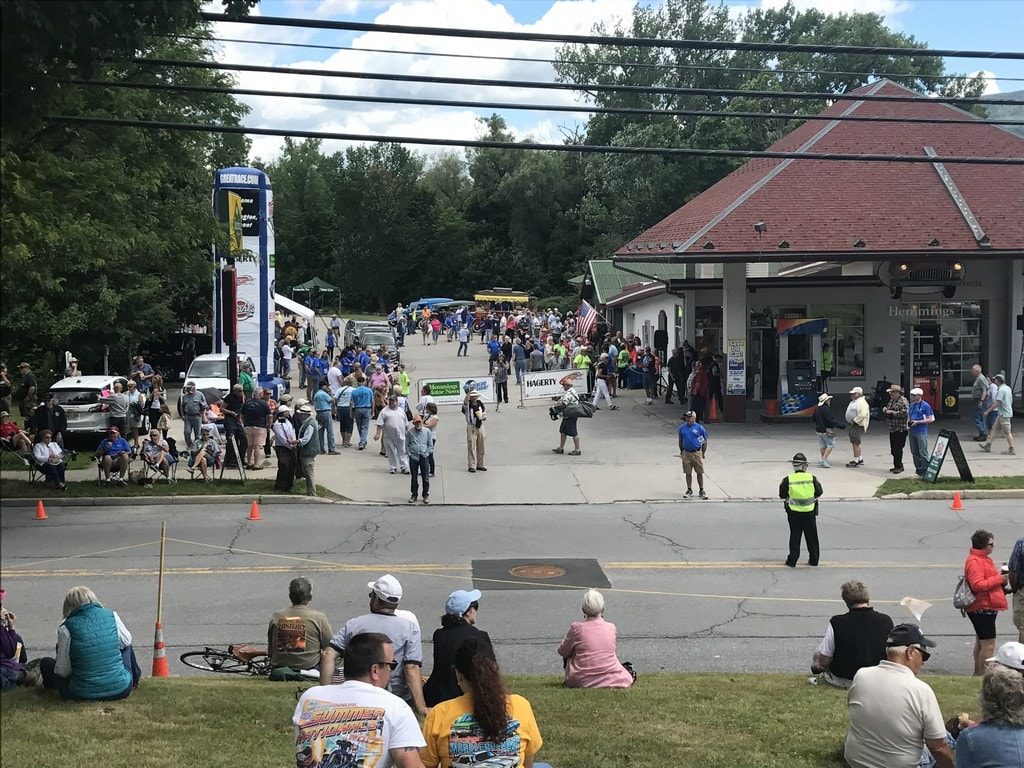 The opening ceremonies commenced with a great display by the Bennington Fire Department colorguard, after which Dave Sutton sang a truly impressive rendition of the national anthem. The first car to roll into the Hemmings parking lot was a 1939 Jaguar SS named ‘Miss Daisy.’ Spectators remarked on the beauty of the car, and how surprisingly yet elegantly small it seemed in contrast to the autos of more recent years.

There was a sizable gap between the arrival of the Jaguar and the next car in line, but after that the participants started coming through in quick succession. Within five minutes, a 1916 Hudson Super 6, a 1932 Ford Speedster, a 1959 Volvo and a 1940 GMC 1/2 Ton Pickup crossed before the excited audience. Many other cars followed, gleaming in the sun as they rolled across the pavement or, wisely, fueled up at the Hemmings gas station.

If you’re interested in watching or taking part in next year’s Race, the full rules can be found on the event’s website, along with plenty of other information.