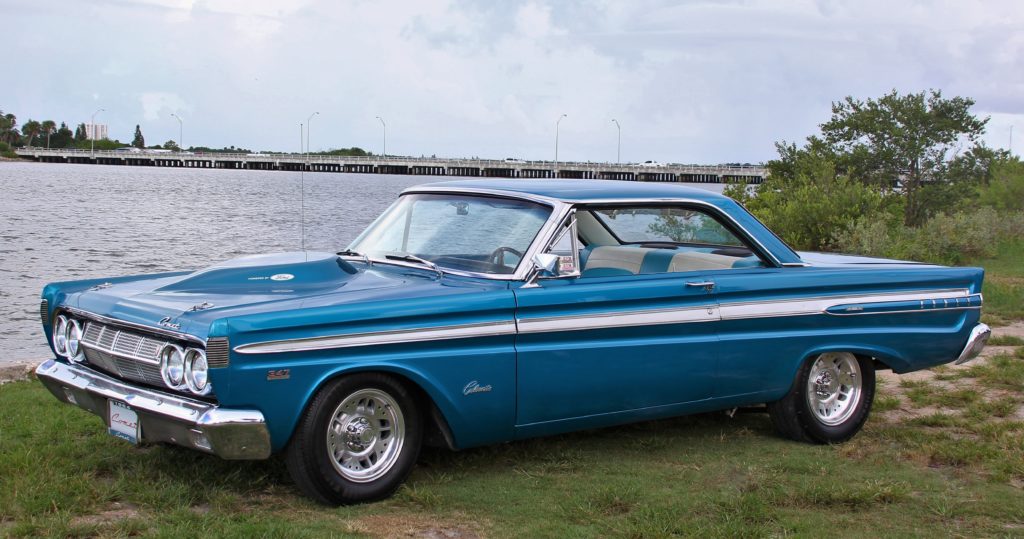 This 1964 Comet Caliente 2dr hardtop is owned by Ken Saul of Mims, Florida. He purchased it nearly 40 years ago in the Dallas area for a sum of $750. It’s not technically blue, but a 1998 Ford teal color; it gets the name from where Ken got married, in Oklahoma. His marriage was held at a preacher’s home right next door to a bar (where the reception was held) called the Blue Mule, so that’s what he named his car, as he explained with a laugh!

Ken wasn’t a rich man, so the car went into storage not long after purchase as Ken became an over-the-road truck driver. He tried saving up enough money each year to work on it, but as is always the case, his job, marriage, and life kept getting in the way. Ken finally retired in 1999 after relocating to the Space Center area in Florida. His last work was for USA shuttle logistics. All the while, the car was still in storage in Texas. Now entering into the picture was Ken’s father-in-law, who wanted to come to a Daytona 500. He told Ken he could bring the car to him, since he owned a trailer and wanted to visit and see the 500.

The car was delivered, and Ken and his good friend Jack Valerio of Port St. John started working on it. Jack was no stranger to working on cars as he had retired from Ford after 24 years. Jack was also a past National Champion of Indy (D Gas class) in 1968 with his 1955 Chevy gasser.

Their first order of business was ordering a 347 Stroker motor. Ken added the Webers about a year and a half ago. It also has Dart Pro One heads, Competition Plus valve train, forged pistons, Eagle rods & crank with Doug’s headers handling the spent gasses. While the stock radio is still in the dash, it’s the Thrush mufflers that are making beautiful music now! A Sun Pro 10k Super Tach monitors the vitals, and it shifts by way of the Hurst Competition Plus 4-speed and Ford top-loader trans. Stopping chores are handled by the CCR Discs up front and rear Ford drums out back. Rear gears are 4:11s in an 8inch Ford rear with a Cal Trac Traction set-up. Mickey Thompson Drag radials (235/60R 15’s-rears, P195/70R14-fronts) handle the pavement duties on Ford Rims.

The interior was handled by Harry’s Interior of Merritt Island, Fl. The front buckets are out of a 67 Mustang, but the rear seat is original to the car. Looking out at that teardrop hood, hearing that rumble from the 450hp beast under the hood and feeling that pure acceleration/adrenaline rush you get when you mash the throttle isn’t anything like a mule, blue or not, but more like the space shuttle rockets Ken was so proud to work with. We love it, Ken…… blast off!

4 Comments on The Blue Mule