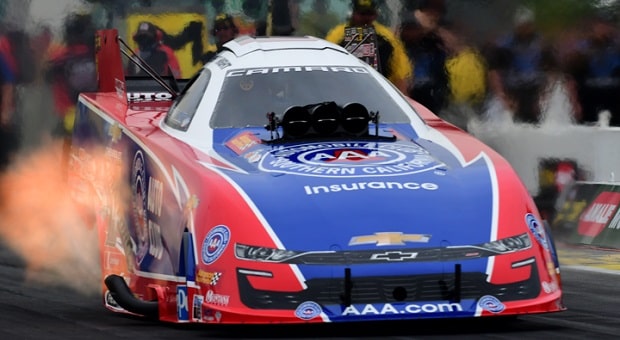 If there were any questions about the surging of John Force Racing operations, this past weekend’s Mopar Express Lane NHRA SpringNationals at Houston Raceway in Baytown, Texas put any doubts to bed. Despite the “stepping away” of Courtney Force from Funny Car competition and the late addition of Austin Prock as teammate to 2017 Top Fuel champion Brittany Force, this four-car squad seems to have few issues in competing this year.

Last weekend, Team Force did it all:

Brittany and John Force swept qualifying. Brittany earned the No. 1 spot in Top Fuel as her father John did in Funny Car. Saturday’s results were historic in NHRA drag racing: The duo became the first father/daughter combination in professional drag racing to secure No. 1 qualifiers on the same day at the same venue.

“In my career I’ve done a lot of things, won a lot of specialty races, but anytime this sport brings me together with my children, that’s what I really love about NHRA drag racing,” John Force said at the time.

Looking for his historic 150th national event victory, John Force’s No. 1 in Houston was his 11th at the facility known for hosting weather-afflicted contests throughout the years. The veteran gave all credit to his new crew chiefs Brian Corradi and Dan Hood (acquired when daughter Courtney abdicated her ride)  together with Tim Fabrisi.

“They gave me a hot rod that runs like that,” he said. Force’s job was to harness that power and get it down the track, which he did in Friday’s second time trials (as did daughter Brittany). 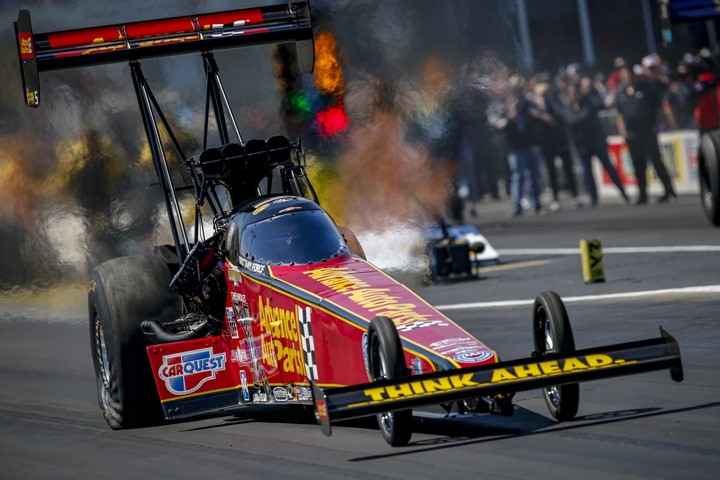 Come Sunday, the duo were ready to back up their qualifying green caps with yellow hats in the Winner’s Circle at top end. Brittany Force, who won a single race during the 2018 campaign and that race was in Houston, is also learning to work with new setups from her new-for-2019 crew chiefs David Grubnic and Mac Savage. She backed up the 2018 result on Sunday with a resounding victory in the finals against three-time Top Fuel champ Antron Brown of Don Schumacher Racing.

To get to the finals, Brittany Force defeated a red-lighting Cameron Ferre with an excellent 3.766-sec run down the 1,000-foot dragstrip, powered past Doug Kalitta with a resounding 3.678-sec pass and, with Grubnic’s help beat his former driver Clay Millican at 3.738-sec, before again recording an excellent run of 3.749-sec in the finals.

“All of John Force Racing was on a mission this morning,” she said. “It was a good qualifying weekend; my dad and I were number one and it was the first time a father and daughter have ever qualified number one together at an event.” Coming into the season with a new crew led by Grubnic and Savage, Force knew it would take time to make everyone comfortable working together. “We started turning a corner in Gainesville, then went to Vegas and were runner-up so I knew things were turning around. To win this thing, I’m very excited. It’s our first win together as a team,” she said.

Things didn’t work out as well in Funny Car competition for John Force, who went as far as the semifinals before bowing to the eventual winner, his son-in-law and company president Robert Hight. This past weekend marked the third time Brittany Force and Robert Hight have shared winner’s podiums together – they both also secured their 2017 championships on the same day at Pomona two years ago.

Hight used three sub-four-second runs to reach the final round, first defeating Jonnie Lindberg’s Toyota Camry with a pass of 3.895-seconds in his Chevrolet Camaro SS, then put reigning champ J.R. Todd’s Camry on the trailer with a close 3.914-sec advantage to Todd’s 3.940. In the semifinals, Hight defeated his boss in a near-photo finish, 3.924 to Force’s 3.932 and met Don Schumacher Racing’s Matt Hagan in the finals, taking out the Dodge Charger Hellcat SRT with a pass of 3.941 to 3.966, four consistent races for the two-time champ. 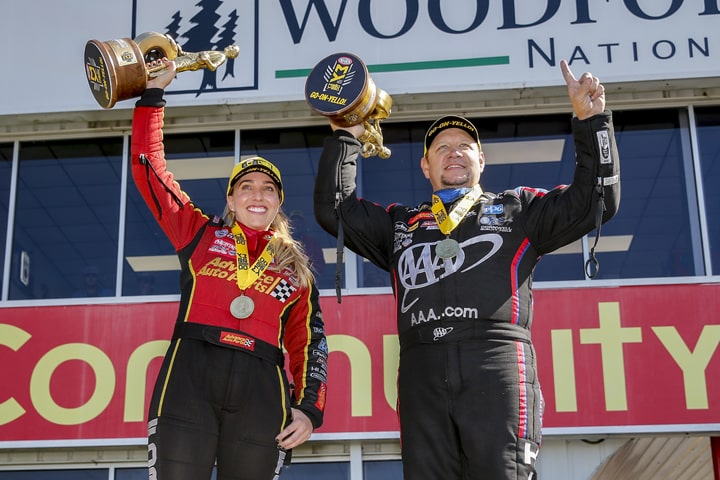 Incredibly, Hight wasn’t even in the field after Friday night qualifying but never lost faith in his Jimmy Prock and Chris Cunningham-led crew. “You believe in your team and you know they’re going to get it done, but what I was nervous about was the weather” for Saturday’s qualifying. It didn’t look good, but the rain didn’t come, Hight and Co. produced two solid passes and he qualified No. 5 for Sunday’s eliminations.

Of racing his boss, Hight had this to say: “John wants me to go up there and have the same intensity when I race him as I do with anybody else, but it’s tough. I hate beating the boss but who knows, maybe he’ll park me and I won’t go to Charlotte,” Hight joked. “It’s a bummer but he wants it as bad as anyone else and you just know that, every day he goes to the race track he’s looking for 150. Nobody will ever match that or even come close,” Hight said.

Hight continues to lead Funny Car standings with 481 points, thanks to his third victory of the young season. Hagan holds 366 second-place points, followed by J.R. Todd (341), John Force (339) and Jack Beckman in fifth place with 332 points. The trio of Tommy Johnson Jr, Ron Capps, Tim Wilkerson are tied with 286 points, while Bob Tasca III and Shawn Langdon complete the top 10 in the flopper class.

Like most major motorsports entities, NHRA takes this weekend off for the Easter and Passover holidays, but resumes racing with the NGK Spark Plugs NHRA Four-Wide Nationals at zMAX Dragway outside Charlotte, N.C. the weekend of April 26-28.