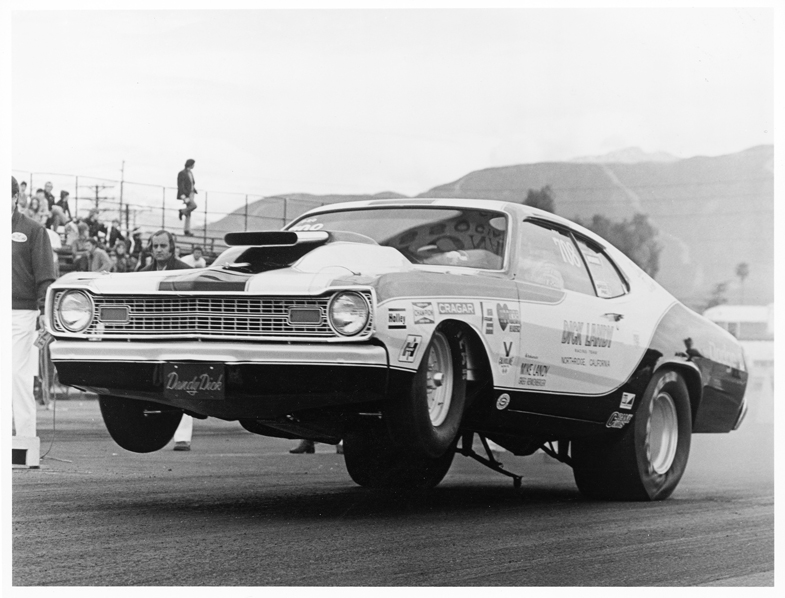 If you’re a fan of the 70’s, then 1973 is right up your wheel house. American Graffiti was on the big screen, and “Dandy” Dick Landy won AHRA’s Pro Stock Championship. During this year’s rise to the top, his ride was this 1973 Dart Sport that was for all accounts and purposes, his last Pro Stock ride. This car was one of four Pro Stock Darts built at Dick Landy Industries (DLI) that year. The “dipped” (acid-dipped to lighten the metal), body is supported by a sub-structure of square tubing and chromoly pipe. Onto this base went the latest tricks in suspension technology, Hemi engine science, and car weight-distribution.

While testing on the wind tunnel at Chrysler, they realized that there was a certain point when the moving air either went too high over the hood or too low, and had no performance benefit. That testing was what helped them discover, how high they should design the hood scoop opening so that more air was directly funneled into the carburetors. On Dick’s Pro Stock ride, he designed and added the moveable aluminum extension piece you see poking out of the front of the scoop. He was hoping to gain an advantage with a more directed and forced air stream entry. He thought that it would help not only funnel the air, but also smooth the actual entry, and help direct the air in a calmer, more controllable airstream.