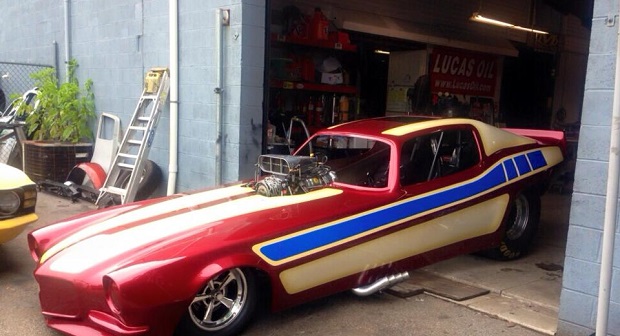 The same folks who restored the Frantic Ford Funny car are at it again. Pirrone & Ellershaw Racing, along with Al Liebmann, will be campaigning a new 1970 bodied Super Camaro funny car, which will be a tribute to the original car owned and piloted by the late Perry Wyatt.  The Super Camaro is a companion to the Frantic Ford in the newly created Classical Nitro AA/FC group.
The original Super Camaro developed from of a partnership between Ray Gallagher and Perry Wyatt out of Detroit area in 1968.  Construction of the Super Camaro funny car began when Tom Smith of Wolverine Chassis was contracted to construct it. Perry Wyatt built the all-steel 427 Chevrolet Engine and the Hemi-Torqueflight Automatic Transmission, as well as the nine-inch Ford rear end.

Construction delays prevented the Camaro from hitting the track until the spring of 1970, when it was racing mainly at Detroit Dragway.
Visually, the Super Camaro has gotten quite the facelift. It has been painted and gotten a redesigned chassis and body. The paint resembles the previous job, but with a more vibrant and shiny color scheme. It has run a couple of races and been displayed in a few shows already, and there is a lengthy schedule planned for the Camaro ahead.
The two funny cars campaign at shows across the country, showcasing long smokey burnouts, dry hops, and header flames to give race fans a taste of the golden era of drag racing. However, the Super Camaro is a tribute to the original, as opposed to the Frantic Ford.  The Super Camaro features a state the of art new nostalgia funny car chassis along with a period looking fiberglass body with all the latest safety equipment, making them legal to run at all NHRA & IHRA tracks.

Thanks to Perry Wyatt Jr., a part of Detroit Funny Car history has been brought back with a tribute to his father and the name.
Check out more information at http://www.thesupercamaro.com and on Facebook.