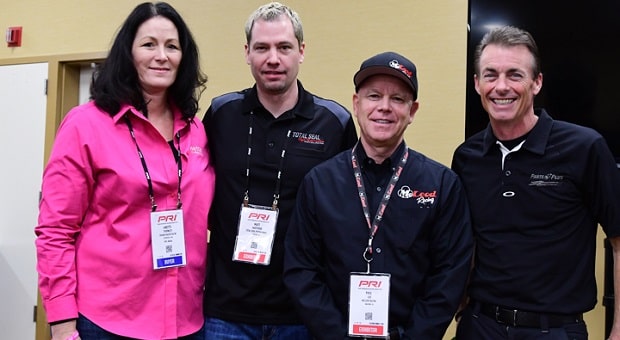 NHRA drag racing teams are family. That’s what racers often discover when they leave the sport and try alternate pathways. Straightline Strategy Group (SSG) is taking that theory to high levels as it integrates marketing for teams competing in a broad range of professional classes.

Starting with its Top Fuel effort for Clay Millican, whose breakout 2018 NHRA Mello Yello season included two victories – a furious championship challenge during both the regular, 18-race season and the six-event Countdown to the Championship playoffs, resulting in a third-place season-long result – SSG is ramping up marketing efforts for the Tennessean.

After hiring Steven Cole, formerly with John Force Racing to lead its marketing group, SSG is positioning Millican for another productive year as he reunites with crew chief Mike Kloeber and adds Jim Oberhofer to assist in the earlier part of the season. Parts Plus returns to the team, together with Strutmasters.com. TMS, the group announced, has become their titanium partner for this coming year and future.

Oberhofer’s return to NHRA competition wasn’t something he expected after leaving Kalitta Motorsports, but as he discovered, he missed the family aspect of NHRA racing – and, of course, the competition. After leaving Kalitta, Oberhofer last tuned the Hennen Motorsports Top Fuel dragster of Kebin Kinsley, a candidate for NHRA’s Auto Club Road to the Future rookie of the year award.

Another NHRA family member making a return is Paul Lee, thoroughly recovered from his massive heart attack two years ago that nearly killed the racer. Lee, with full approval of his medical team, is returning to Funny Car competition; SSG’s mechanical team is prepping a new McLeod Funny Car for him (manufacturer affiliation to be decided shortly) and when it’s ready, so too will Lee be prepared to compete at the highest level – with Jim Oberhofer calling the shots on his car.

SSG will manage the day-to-day operations of the McLeod flopper.

“The management component will go hand in hand with our marketing alliance group, working to secure financing for Paul to compete for the entire 2019 season,” said Doug Stringer, SSF partner. “Our first order of business was securing a highly talented crew chief, and we are pleased Jim O accepted that position.”

This Straightline Strategy Group partnership family is going beyond the nitro ranks and into the much-maligned sport of Pro Stock racing, bringing 2018 race winner (Houston) and fierce competitor Matt Hartford under its umbrella. Hartford’s Total Seal Camaro intends to run in every one of the 18 Pro Stock races on the NHRA schedule. Hartford is a former world champion in both ADRL Pro Stock and NHRA Sport Compact competition.

The first woman to compete in NHRA’s Top Fuel Harley class, Janette Thornley, has joined the SSG family as she transitions to NHRA competition. Thornley current pilots the “Dream Chaser Racin” AMRA Pro Fuel Harley-Davidson, finishing third in the 2018 standings in this ultra-competitive class. She is a four-time Pro Fuel world champion and has received multiple awards, including Female and Lady Racer of the Year accolades. She begins her eighth season of competition next year.

SSG is also aligning itself with No-Prep Kings/Street Outlaw racer Jeff Lutz and his 1957 Chevy Bel Air. Lutz’ racing class choice is one of the hottest categories of the sport – No Prep-style competition. He has reached national “list” status, is well known for the performance of his Chevy and took home the victory in No Prep Kings class during the 2018 Nuclear No Prep at Cordova International Raceway in Illinois.

“We have seen several marketing unions in racing between drivers in similar category entities,” noted SSG partner Scott Gardner, “but rarely, if ever, within the broad spectrum we are offering through our marketing alliance.” The emphasis, he noted, will always be in making this group a true family of racers.