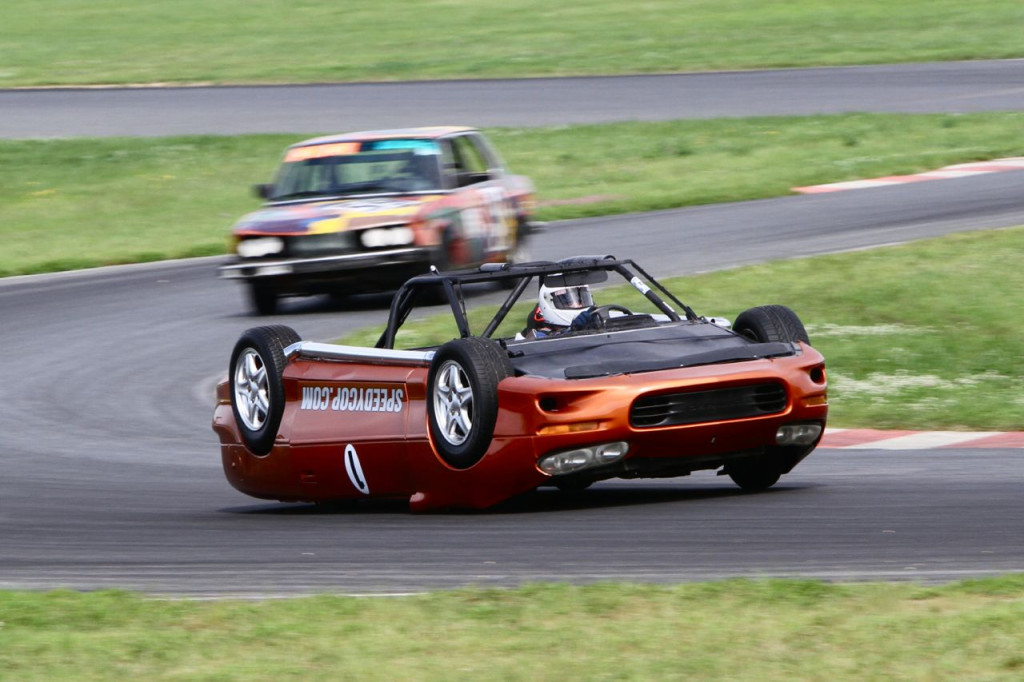 Photos: Courtesy of 24 Hours of LeMons
The 24 Hours of LeMons is the world’s first endurance-race series for cars that cost $500 or less. With its own YouTube channel and 10,000 participants spread across dozens of races at tracks coast-to-coast, no other event creates bigger, weirder, more hilariously irrational challenges than these weekend-long blowouts of door-to-door, bumper-to-bumper competition between cars that are due for the scrapheap.
The Burnout sat down with one of the organizers, Nick Pon (who signs his e-mail “Associate Perpetrator” if that gives you any idea of the type of hijinks these fine folks get up to), to talk turkey about cheap cars, great racing, and that one time the Canadian Border Patrol took over the race.
The Burnout: What exactly were you (collectively) doing at the moment you thought, “Hey! Let me start an endurance racing series for themed clunkers and junkers! That’d be hilarious!”

Nick Pon: It goes back to an event called the Double 500. Jay Lamm, the founder of LeMons, had participated a few times in the California Mille classic-car rally– a super- high-end rally with 1950s Ferraris and the like.  After observing these million-dollar machines break down constantly during the Mille, he challenged the organizer Martin Swig with the idea that a $500 car could complete 500 miles more successfully than a million-dollar Ferrari. Martin called his bluff and the Double 500 was born–500 miles (on public roads) in a $500 car. Well, not only was Jay right that $500 cars would do  better than million-dollar Ferraris, but the event turned out to be easy. You’d find some old Toyota with a bashed-in fender for $500, and it could do 500 miles without even trying. So, Jay came up with the idea to up the ante and bring the idea to a racetrack, where the $500 cars would be at full throttle, racing wheel-to-wheel, for hours on end. And, really, when he came up with the name, 24 Hours of LeMons, we just had to make it happen.

The themes came somewhat later. Since the event was a parody of Le Mans, we expected the teams to parody Le Mans teams, but we never envisioned stuff like Cessna airplane bodies mounted on Toyota Van chassis. I really give a lot of credit to the participants for bringing the visual spectacle to levels we never could have imagined.

The Burnout: What are your top three team themes from recent years?
Nick Pon: Man, there have been so many good ones, so I’m sure I’ll leave some out, but I’ll just name a few:
1. There was a two-car team that did a Canadian Border Patrol theme, where one car was a Toyota Corolla dressed up to look like a Ryder rental van. They cut a section of chain-link fence and bolted it to the front of the “van” to make it look like it had crashed through the border. The second car was a Toyota Supra that was the Border Patrol police car that was chasing the fugitives in the Ryder van. They had half of their drivers dressed as Canadian fugitives–one of the guys carved the shaped of a maple leaf into his chest hair!–and the other half dressed as border patrol. The team members were even chasing each other on foot through the paddock during the weekend. The whole thing was just incredibly elaborate, well executed, and–best of all–didn’t have a damn thing to do with racing.
2. I have a tie in my head between two Speedycop (a D.C.-based police officer/LeMons fanatic) creations–the Upside-Down Camaro (a Camaro body mounted upside down on a Ford Fiesta), and The Camper (a camper trailer shell bolted atop a small SUV that just looked like a self-propelled camper-trailer going down the track). The visual impact of those two cars were just mind-boggling.
3. I’ll pick this last one because it’s fresh in my mind–the Barbie Corvette. Basically this team found a junky old Corvette and made it into an exact replica of the pink Barbie toy. Even better, they had one of their female drivers dress up as a race-driving doll, and they put her in a life-size Barbie-style package. The idea was that it was a whole set–Corvette and race-driver doll. Then, they unwrapped the package and tried to put her in the Corvette, but she was all stiff and under-jointed like a real Barbie doll. Just ridiculous stuff.
Again, I’m leaving out a huge number incredible themes, but that’s a sampling.
The Burnout: Which car is the most popular choice for racers? And which car did you think wouldn’t make it off the starting line, but surprised everyone with a good finish?
Nick Pon: In general, racers choose cars that they are familiar with–you get a lot of situations where guys from a Mercedes repair shop will build a Mercedes for LeMons. But strictly by the numbers, 1980s BMWs and Japanese stuff is probably the most popular. Cars that do unexpectedly well are probably Alfa Romeos (I mean, there’s a reason Alfa had to leave the US market), Volvos, and Ford Crown Vics. On the latter two, I think they’re known as being reliable cars, but probably not so much as road racers. But they perform surprisingly well on track.
The Burnout:Why this race? What attracts people to the LeMons series, and do you see the sort of participants that you expect to.  What’s been the biggest surprise?
Nick Pon: I think the main thing that attracts people to LeMons is that it’s a chance to be in a real race on a real track even if you’re just an average Joe (or Jane). The various barriers to doing that had gotten so high that people were turned off from even trying. LeMons gives people a chance to race who maybe had a desire to try it, but never were able to make the time and money commitments that had become the standard for roadracing. The biggest surprise, then, is the amount of participants we’ve gotten from the other side–experienced and in some cases professional roadracers who have gotten into LeMons. I guess it’s a chance for them to race where there’s no pressure to win, or prevent an expensive car from getting damaged.
The Burnout: Have you ever had to tell someone, “No, you cannot race that. It’s unsafe/falling apart/doesn’t meet the criteria/hideous beyond the telling of it.” Have you every wanted to but couldn’t?
Nick Pon: The one thing we take seriously in LeMons is safety, so if anything doesn’t meet our safety standards, it’s simply not going to fly. Of course we take no pleasure in telling someone that their car can’t race, so we do our best with online guides and email assistance to help people prepare their car properly. But, ultimately, we don’t hold back if a car is unsafe. We’ll tell the team, “this is unsafe, it can’t race, and here’s why.” The only situation in which we have wanted to get rid of certain teams but haven’t really been able to do it is when a team has a bad attitude. If the bad attitude becomes a safety concern–like a guy is driving recklessly on track or something–then we can step in. But, if he just has a terrible personality, it has to be REALLY terrible for us to reject the team for the next race.
The Burnout: What is the one piece of advice you’d like to give participants?
Nick Pon: Well, aside from the safety part, don’t take it too seriously! It’s easy to get caught up in the competitive atmosphere, and start obsessing over another team that you think is doing something unfairly, or how your team is letting you down, or how the organizers are conspiring against you, or whatever. If you’re the kind of person that stops having fun if every last little detail isn’t going the way you want, then LeMons isn’t for you. It’s driving crappy cars around some of the best tracks in the country, just for the heck of it. If you’re not having fun within those basic guidelines, then you’re doing something very wrong.
About Andreanna Ditton 193 Articles
Andreanna Ditton is the Content Manager for MotorHead Media and the Editor-in-Chief for RacingJunk.com/news. She's been working in the automotive publishing industry since 2007 focusing on racing and performance for motorcycles and cars.