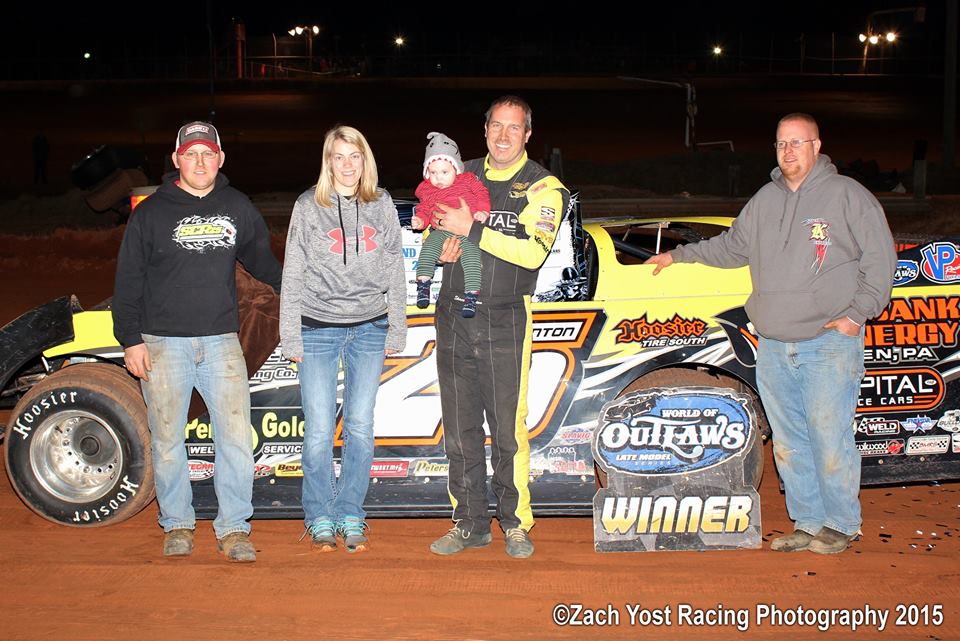 “It’s been a journey,” Clanton said.  “A lot of people have helped me through my career and I never had enough money to do this on my own.  Just hard work.  I had some good car owners back in the past.”

In an emotional speech, Clanton thanked his family and crew members Brock Wise and Joe Armistead, Jr. for their support.

“It’s a real special week for us.  My dad, he’s not here but I know he’s looking down,” Clanton said.  “Next Saturday he’s getting inducted into the Hall of Fame in Georgia and that means a lot.  This week has been emotional for sure and I know he’s looking down and smiling at everything we’re doing.  It means a lot to my family,  the next coming week.  I just love doing what I’m doing and he put this in me to do what I’m doing and it’s very special.”

In addition to the championship, Clanton took home the VP Racing Fuels Award and his crew chief, Brock Wise, took home the 2015 Crew Chief of the Year award.

Brandon Overton, who finished 10th place in the championship points standings, was named the 2015 Rookie of the Year, which was presented by ButlerBuilt, and he received a $10,000 bonus.  He congratulated his fellow rookie of the year contender, Jordan Yaggy.

“[Jordan] deserves to win this thing as much as I do,” Overton said.  “He and his family are probably the nicest people I’ve ever met.  I’m proud of finishing 10th and this rookie deal but more than that, this thing is tough.  I really didn’t know what I was getting into and, like I said, it’s just a struggle to keep going.  Last night when I took that checkered flag at Charlotte, I didn’t win a race and all, but it made me feel so good that I stuck it out through all the bad.  I finished it out and I won the rookie.  I’ve got to thank everyone else who helps me.”

Overton also received the Raye Vest Memorial Pill Draw Award for the best average pill draw of the season, which came with a $500 bonus.

Josh Richards, three-time series champion who finished second in the points standings this season, received the award for worst average pill draw, which came with a $500 bonus.