With over 3000 new products from more than 250 companies, you might think that picking the five best new performance products would be next to impossible. To be honest, it wasn’t easy, but it was made easier by the fact that a good number of those new products on display at SEMA 2017 in Las Vegas were designed only for racing or for off-road applications. That, and the fact that there were also a number of tools and paint and collision products unveiled at SEMA made our job of picking our five favorites quite a bit easier. You’ll find products from COMP Cams, Hotchkiss, Flowmaster, Lightning/US Gear and Energy Suspension on our list. As an added bonus, we’ve also added our two picks for the best new diesel performance products.

The COMP Cams FSL™ Series Camshaft for the L99 engine from General Motors is the first aftermarket camshaft introduced in the last 20 years that was able to pass the stringent CARB (California Air Resources Board) EO (Executive Order) process, making it legal for street and track use in all 50 states.

If you’re looking to gain in the area of 30-50 horses in your Fifth Gen (2010-2015) Camaro SS with no reprogramming or tuning required, this is what you’re looking for. You don’t even need to change the valve springs, and this cam offers drop-in convenience. It’s designed to work with GM’s Variable Valve Timing (VVT) and offers compatibility with Active Fuel Management systems by featuring unique profiles on non-switching and switching cylinders.

Imagine being able to dial up an extra four PSI of boost pressure whenever you want it, or being able to dial down the boost so the valet or car wash guys can’t get all squirrelly with your car. Well, imagine no more. Flowmaster® introduced their Delta Boost Module for specific 2015-2017 vehicles equipped with either the 2.7L or the 3.5L EcoBoost engine at SEMA 2017, and this baby lets you do just that.

Installation is simple, too. Just unplug the boost sensor and plug the cable from the module into the boost sensor’s connector and the sensor wire into the boost module’s cable, and you’re ready to go, after downloading the app for your Android or iOS smartphone. The module and app give you four settings to choose from: Valet, Standard, Sport, and Max. The Delta Boost Module is legal in all 50 states and is just waiting for the CARB EO number for California sales.

Mopar fans in the crowd will know that the torsion bar suspension our babies were born with can make it hard to find a good set of lightweight A-arms that give great street and autocross performance. These new geometry-corrected tubular upper A-arms from Hotchkis Sport Suspensions do just that.

Whether you’ve got an old Road Runner, Super Bee, GTX, Comet, Charger, Cuda or Challenger, these tubular A-arms will give you better cornering traction and steering response than the old stock arms. They are designed specifically to correct the excessive caster gain of the OEM arms and give your suspension the negative camber curve that you need for truly awesome handling at speed.

A Laser Cut Pick-Up Point Relocation Bracket is a primary feature of these arms, and exclusive to Hotchkis. Although they are extremely lightweight when compared to the original arms, they are TIGged and fully gussetted for added strength and durability. Maximum adjustability is obtained by the inclusion of High Articulation Rod Ends, and they’re finished off with ball joints of the highest quality and have a beautiful nickel powder-coat finish.

It’s my opinion, based on almost three decades of trial and error, that Energy Suspension polyurethane bushings and motor mounts are the best products for the money on the market. These new motor mounts for 84-91 Vettes are a case in point. Stronger yet lighter than the OEM rubber mounts, they also don’t suffer from the rubber breakdown caused by oil leaks and manifold/header heat.

They’re lighter as well, but they still resist flex and twist caused by your engine’s torque and thus can be counted on to send more of that torque to your rear wheels. The only drawback is they’re not available for the Z06, ZR1 or the GS ‘Vettes yet. Energy Suspension polyurethane bushings and mounts are proven to be stronger, more resilient and longer-lasting than the OEM components they replace, making the inclusion of these C4 Corvette polyurethane motor mounts on this list a no-brainer.

Lightning is the manufacturer of US Gear ring and pinion sets. They are a premiere supplier for Ford and GM performance rear ends. Moser also uses them exclusively in their rear ends. According to Kip Hayden of Moser Engineering, “When choosing a supplier for key products that you do not manufacture, it is always important to choose wisely, especially when you have built you brand and identity by only manufacturing the highest quality parts here in the U.S.A. Here at Moser, we understand that gear sets require a level of attention that borders on art as much as science… a knack for knowing how, why and when to apply a skill set. It’s with confidence that we recommend U.S. Gear, as they have long been a timely supplier of the highest quality and have dependable delivery times.”

Ford, GM, Moser, and now RacingJunk select U.S. Gear ring and pinion sets. Lightning/U.S. Gear introduced a new line of eight high performance ring and pinion sets for the Dana 60 Pro axle for those looking for awesome to massive acceleration. These new gear sets start at the low end with a ratio of 4.10 and go up to a whopping 6.17. Strap in and hold on tight! Be warned though: These aren’t really highway gears unless you’re looking to turn about 10,000 RPM.

For those of you with the 6.6L Duramax Diesel LB7 engine, we haven’t forgotten you. Gale Banks was known years ago as “The God of VW/Air-Cooled Power.” Now Banks Power Products is known for awesome products that can pump up the power for just about anyone. Take the Banks Power 47700-B Six Gun Bundle as an example.

The Six Gun Bundle is a full kit that includes intake, exhaust, and tuning components to calibrate fuel delivery and maximize airflow to deliver a power and torque increase of a whopping 155 horses and an incredible 385 lb-ft! Even better, none of that nasty toxic black smoke is generated when you stomp on the pedal. None of the components are mixed and matched from other kits they sell, either. Everything in this kit is designed to work seamlessly together to provide torque gains of up to 845 over stock while maximizing efficiency and engine durability. Finish up to 15 truck lengths ahead of stock with this 50-state legal power adder.

Sinister Diesel introduced two cold air intakes for diesel engines at the 2017 SEMA Show. One is for the 5.6L Cummins Diesel and the other is for the Chevy Duramax LML engine. Both come powder coated in Sinister Blue, are made out of anodized aluminum and boast improved strength and durability over competitors’ models. Sinister went with aluminum for two reasons: It’s stronger than plastic and it dissipates heat better than plastic. 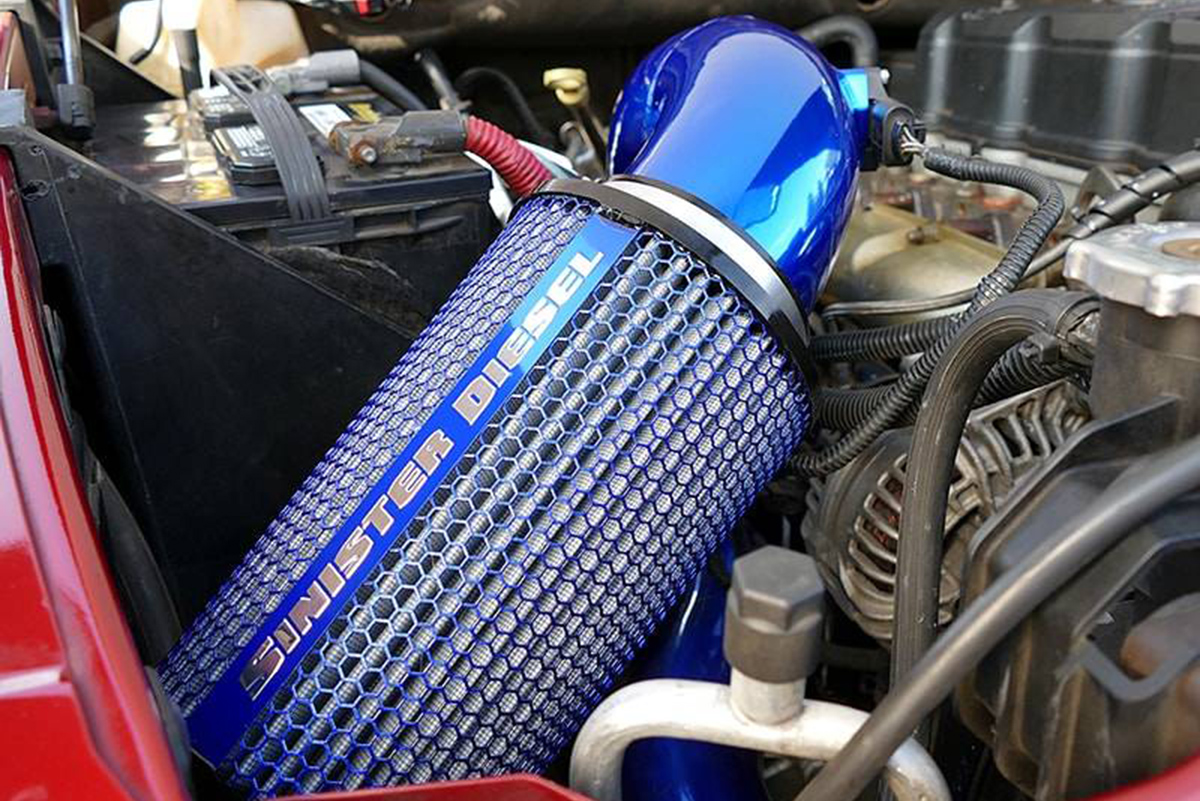