The Super Cup Stock Car Series will cap off the 10th Anniversary regular season with a bang this weekend in Pennsylvania. Three champions, plus many other trophy recipients, will be named at the Jennerstown Speedway Complex Twin 50’s presented by United Tire.

The biggest award on the line is the 10th SCSCS champion title.  Jim Crabtree Jr. leads at the moment, having had a very consistent season to date in his first full-time return to the series since consecutive runner-up points finishes in 2012 and 2013.  The driver of the No. 63 Jim’s Automotive / Judy’s Apartments Chevrolet has finished no worse than fourth all year long. However, despite his current good position, he doesn’t have the championship in the bag just yet. A record field is expected, and four competitors still have a shot including the Muncie, Indiana resident’s son J.P. Crabtree in the No. 42 USA Tire / For The Troops Ford.

Only 11 points separate the 2012 SCSCS Rookie of the year and series veteran Kevin Kromer and two-time winner at Jennerstown in July Brent Nelson in an very close battle that could rage right down to the wire. Defending champion Harvey Harrison still has a chance as well, but would need some significant luck for a repeat victory.

A ninth place result or better for Jim Crabtree Jr. in each of Saturday’s 50-lap races would win him the title. In addition to the overall win, he may also take the new Northern Division championship. The gap is only 40 points, with the only remaining eligible driver being Walnutport, Pennsylvania’s Kevin Kromer. The No. 77 Nobody Fights Alone / Racing for a Cure Chevrolet will no doubt be going all-out to capitalize on a winning opportunity.

Both the Northern and Southern Division titles will be decided exclusively at the conclusion of the first Twin 50, and both feature finishes will factor into the season-long overall champion.

Not to be forgotten, plenty of racers either out of the running for a championship or making their initial appearance in 2017 will be looking for a single-race victory. Uniontown, Pennsylvania’s Bill Ashton made his mark a year ago at his home track with a breakthrough win and will be looking to do the same again. Indiana natives Stephen Cox and Trent Gossar have already won this year and want to add to that total. Home state drivers Kyle Kromer, John Komarinski, and Jerod Brougher are set to bounce back after absences the last time out, and they have nothing to lose as they search for their best career SCSCS finishes. New York’s Brent Cross and Jason Holehouse as well as North Carolina’s Tim Richardson are slated to make their first starts of 2017.

Another seven or eight teams will mix it up on the 1/2-mile in what could become the most competitive event in series history.

SCSCS practice is scheduled to begin at 2:00 p.m. with qualifying taking place at 5:00 p.m.  The first of the Jennerstown Speedway Complex Twin 50’s presented by United Tire will take the green flag shortly after 6:00 p.m., and fans will be greeted with an autograph session in the midway behind the grandstands between races.  The Sopwith Motorsports Television Productions crew will be on hand filming and producing for nationally televised broadcasts, which will premiere on Thursday, September 7 on MAVTV.

For the second straight year, a trophy presentation and breakfast buffet for teams and their families will take place in nearby Somerset, Pennsylvania on Sunday morning.  While the regular season will be coming to an end, two more non-points special events are on the schedule for the autumn months. 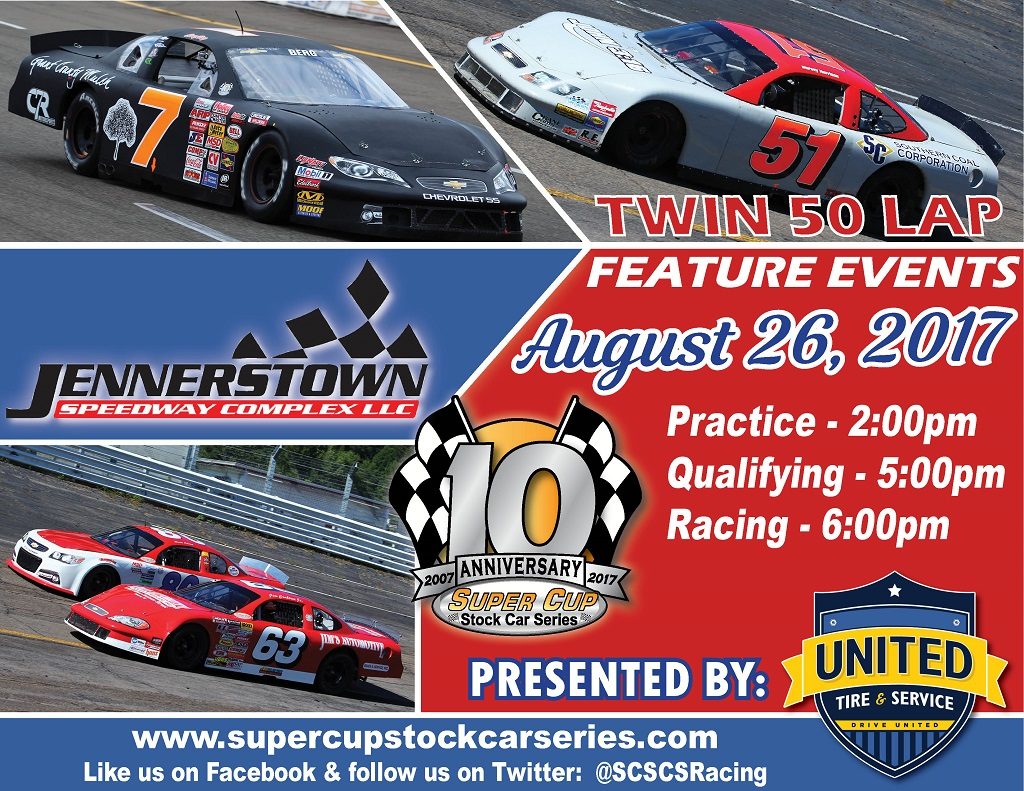