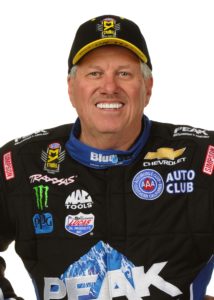 What started as a sociable gesture at the starting line in Friday’s NHRA Winternationals– a normal handshake from team owner, John Force, to fellow competitor, Don Schumacher–has turned out to be the first salvo in a battle that had been brewing between the two racing organizations since the last win light at Pomona.

Schumacher’s avoidance to return his notion offering just a shrug spoke volumes and although he acknowledged Force walking beside him, he wasn’t about to be cordial to his long-time rival and nemesis.

It was rooted at the end of last season when crew chief, Jimmy Prock left Don Schumacher Racing returning to John Force Racing and it came as a shock to Schumacher, who suddenly had to find a replacement crew chief for his Jack Beckman Dodge Funny Car.  As a package, it was Prock, Chris Cunningham, and long-time crew chief, John Medlen heading to Force with Medlen changing in midstream returning back to DSR to join Guido Antonelli and Neal Strausbaugh to head up the Infinite Hero racing program for 2017. 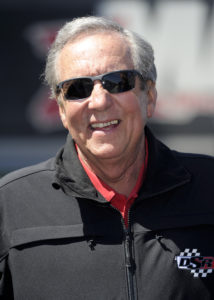 With the season quickly approaching with testing on the horizon all these positions were quickly filled but the juggling that Schumacher had to go through wasn’t expected bringing the bitterness between the two major NHRA car owners to a hilt.

From the FOX broadcast, interviewed by Amada Busick, Force stated when questioned about Schumacher’s cold shoulder said, “I’m not going to stand here and throw mud.  I’m a drag racer, that’s what I do.  I tried to say, hi, that’s all.   I was trying to do that and I was a little surprised (when he didn’t shake Force’s hand).  I tried to shake his hand and it was, ‘whoa’ that really surprised me.  Is that how’s it works?

“I had just complimented him just 15 minutes before and I know I’m a high-energy, overkill, yelling, screaming guy, but I’m excited about what we do and what my kids do and my sponsors that are here with me.  I don’t have his kind of money.  Without my sponsors, I’m done, I’m finished and I’ve worked my butt off to stay in business.

“Then you think, I’m gonna stand on the starting line, even to a billionaire, and take an ass chewing?  No, I’m not.  He doesn’t know who I am.  Maybe I don’t know who he is.  But I was a little surprised and I’m going to try again.  Don doesn’t know it, but we’re going to be friends one day.  We already say ‘hi’ in racing, but maybe go fishing sometime.  It really surprised me, the things that he said and I’m not going to repeat them.  I want to hear him say them again.  I want to understand it.  He told me, this ain’t personal this is all about winning.  To me, it’s all about family, but it’s all about winning.  I can give the man a chance.  I don’t walk in another man’s shoes.  Maybe, I caught him at a bad time.  I’m amazed, just bring the sh*t on!”

Schumacher was quick to point out saying, “We have a tremendous rivalry going and what happened over the winter just intensified that rivalry,” said Schumacher.  “That’s where it’s at.  I have the highest desire to go out and beat John Force and John Force’s teams every time we pull up into the starting line and that’s the way it’s going to be.

The two rivals talk about the incident in the video below:

The next bout for these two NHRA teams continues on February 24-26 at the NHRA Arizona Nationals being held at Wild Horse Pass Motorsports Park in Chandler, Arizona.