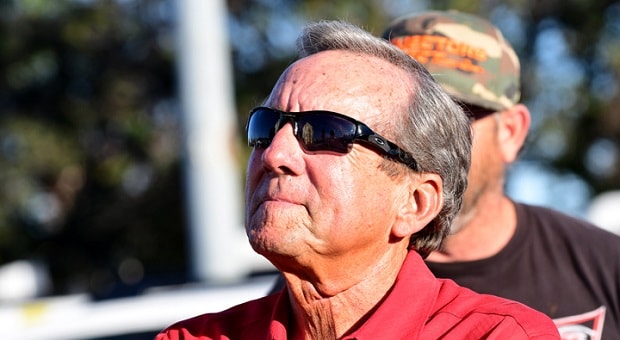 Don Schumacher Racing has elected to make a major commitment to concussion research, the team announced prior to their first qualifying runs at the 39th annual Dodge Mile-High NHRA Nationals presented by Mopar. The current squad of seven drivers, together with team owner Don Schumacher, have elected to donate their brains to the Concussion Legacy Foundation (CLF).

Joining another 3,500 former and current athletes and veterans who have pledged to donate their brains for research since 2008, DSR’s decision marks the first time an entire team has made this commitment. Schumacher, joined by son Tony Schumacher, Antron Brown and Leah Pritchett pledged from the dragster side of the squad; Jack Beckman, Ron Capps, Matt Hagan and Tommy Johnson Jr. pledged from the flopper side.

This group of eight signed their enlistment papers during an event for CLF Project Enlist, a new program from CLF and DSR partner Infinite Hero Foundation (IHF) that will accelerate research on traumatic brain injury (TBI), chronic traumatic encephalopathy (CTE) and Post-Traumatic Stress Disorder (PTSD) in military veterans. (IHF is a non-profit that combats both mental and physical front-line issues facing returning military heroes and their families.)

Through this new Project Enlist, both CLF and IHF are conducting recruiting and outreach to the military and veteran communities, intending to encourage participation in the Department of Veteran Affairs-Boston University-Concussion Legacy Foundation (VA-BU-CLF) Brain Bank brain donation registry. This brain bank is the world’s largest CTE brain bank with sub-specialties in concussion, ALS, Parkinson’s and Alzheimer’s disease.

Don Schumacher felt the need to be involved and help raise awareness for Project Enlist: “Donating my brain for research to help other individuals in this world is something I’m more than willing to do. It surprised my wife, Sarah, but she agreed to me doing this, based on its potential to help drivers, soldiers, business people and the population of the world,” he said.

The drivers, who experience intense vibrations, extreme G-forces and high-speed explosions during qualifying and their races, will immediately begin a comprehensive brain monitoring process to ensure an in-depth brain profile upon donation. Schumacher hopes that his team’s public proclamation will help to remove the stigma associated with traumatic brain injuries and inspire others to step forward and make the commitment to pledge their brains to science.

“I support this foundation 100 percent,” added Schumacher, “and was thrilled that my seven drivers agreed to donate their brains to the Concussion Legacy Foundation.” More than a dozen military veterans joined the DSR donors as they all pledged to help this organization during the event at Bandimere Speedway outside Denver, Colorado on Friday afternoon.