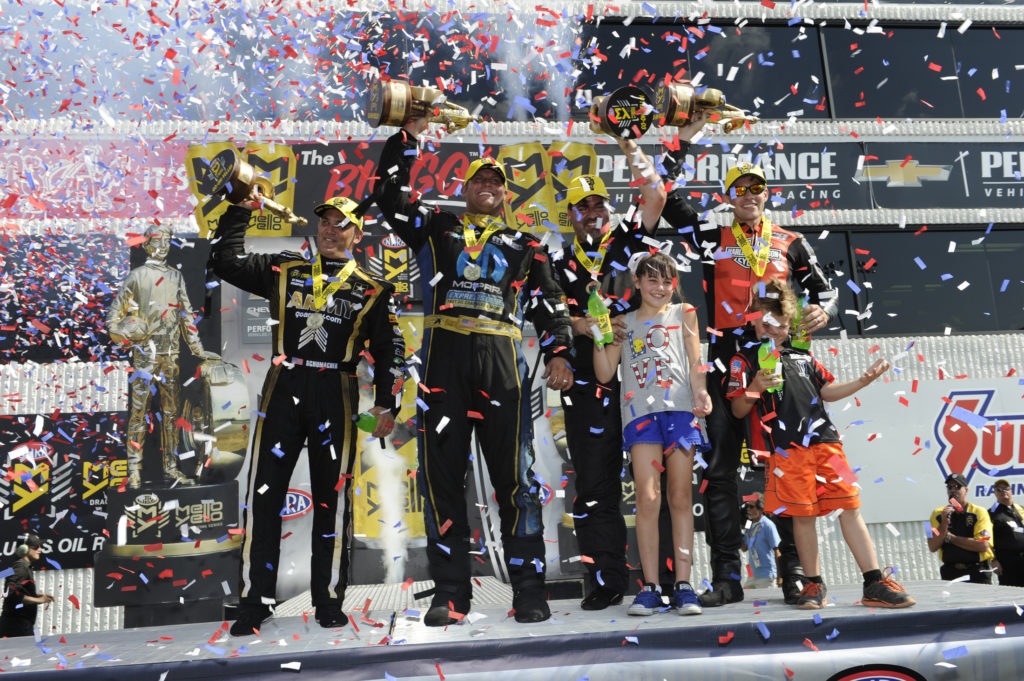 In Indianapolis, Labor Day means only one thing, and that’s the Chevrolet Performance U.S. Nationals.  It’s the one drag race that can change a career and make a season, and for 62 years it has been NHRA’s most prestigious race; with the biggest purse and points and a half, there’s a reason it’s called ‘The Big Go’.  Everyone wants to win it.

Top Fuel’s Tony Schumacher set the record, making 10 wins at the Nationals in a career that began on the same track 20 years earlier to the day. Matt Hagan just beat down his Funny Car opponents on the starting line and on the track with runs that no other team could match.

Chris McGaha made his Pro Stock debut five years ago at Indy, and now he’s a U.S. Nationals champion and Pro Stock Motorcycle winner. Andrew Hines rode his Harley to victory for his second Indy win. 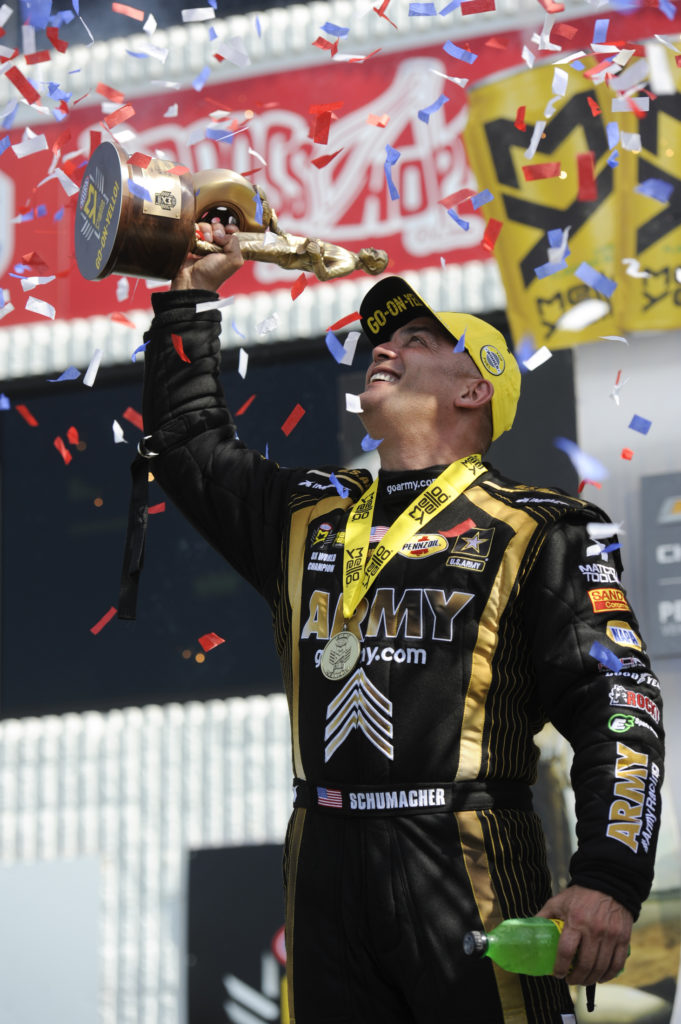 The U.S. Army Top Fuel team of Tony Schumacher came into Indy’s U.S. Nationals on a mission to win it all, and that’s exactly what they did.  On Saturday, Schumacher defeated his teammate Leah Pritchett to win the Traxxas Shootout for $100,000, and on Monday he riddled the field, taking down Tripp Tatum, Antron Brown, and J.R. Todd. In the finals he slipped by on a small holeshot over three-time consecutive runner up at the Nationals, Steve Torrence.

“I didn’t see (Steve Torrence) for one second, but I heard him,” said Schumacher.  “It was a great final round, live on FOX and I had my chance to win my 10th at Indy, separated by inches.  The fans got a close race.  It’s been such a great career and it’s been so much fun.  I’ve had great teams, one after another, and it’s a blessing to be a part of this and have a chance.  I love my job and I love drag racing cars.” 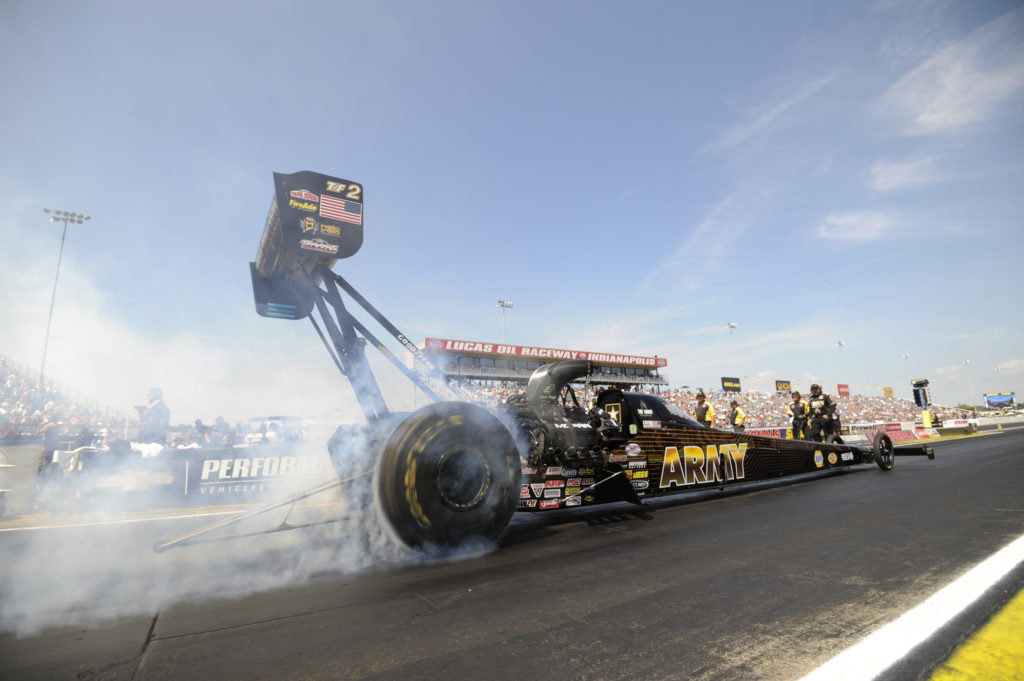 In another record, his 10th career Indy victory broke the tie with Pro Stock’s Bob Glidden of nearby Whiteland, Indiana. He is now the winningest driver at the Lucas Oil Raceway at Indianapolis out right.

“What a special moment.  What a magical place,” said Schumacher, who was runner-up at Indy in his first NHRA race in 1996.  “You don’t want to leave anything on the table, and we didn’t.  In 30 years, when I’m thinking about a great moment, that’d be it.”

It was Torrence’s third straight U.S. Nationals finals without a win and again will leave Indy shaking his head, wondering what else he needs to do.

“This is a tough one to take,” acknowledged the man who will start the NHRA’s Countdown to the Mello Yello Championship from the No. 3 position.  “My guys worked so hard and gave me such a good race car – plus we really wanted to win it for A.J. (tuning consultant Alan Johnson, whose brother Blaine was killed in a qualifying accident at the Nationals 20 years ago).

“Not to take anything away from Schumacher and that team.  Their record speaks for itself.  But to be that close to winning at Indy for the third time in four years and not get it done is just hard to take.”

Now the Countdown starts in two weeks in Charlotte.  Leah Pritchett qualified for Monday’s championship eliminations in the 10th spot to earn two bonus points, while McMillen was 16th and only earned one point.  Both lost the first round, locking her into the Countdown, much to her relief.

Antron Brown will have the 30-point lead over Doug Kalitta with Steve Torrence, Schumacher, and Brittany Force making up the Top 5. 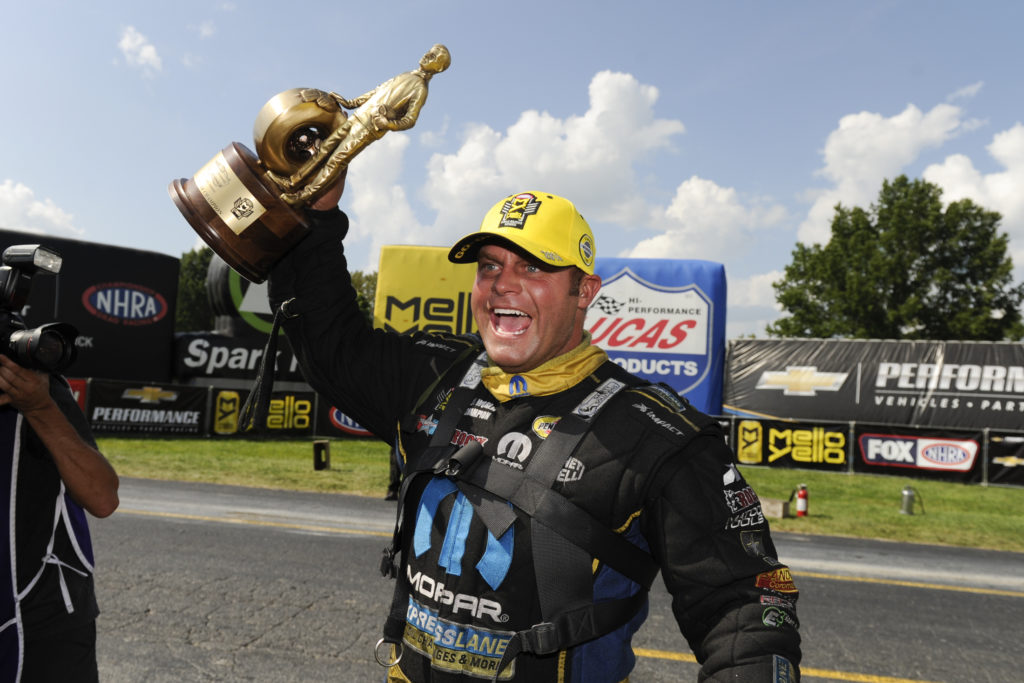 Last week at Lucas Oil Raceway near Indianapolis, Matt Hagan’s crew chief Dickie Venables unloaded a new Dodge Charger R/T Funny Car chassis at the NHRA test. After only a couple of laps down the track he felt they were good to go, and packed it up to head back to Don Schumacher Racing headquarters right down the street.

Venables entered Monday’s U.S. Nationals tuning Hagan to his first U.S. Nationals title with four sub-4-second runs in the hottest conditions of the weekend after securing the No. 1 qualifying spot on Friday night, clinching his 21st Funny Car national event win on Monday.

“It’s just incredible,” said Hagan, who is the No. 3 seed in the Countdown to the Championship.  “This is something that we’ve been trying to accomplish for a long time.  My crew chief Dickie Venables – that guy put a hot rod under me all weekend long.  The guys do their job, and I’m just proud to be part of it, proud to be part of Don Schumacher Racing, and proud to have good sponsors in Mopar.  The fans got what they paid for today.  It’s really something to come out here and know that you have a great car and you have to dig deep to get it done for your team, but that’s why they put you in the seat.” 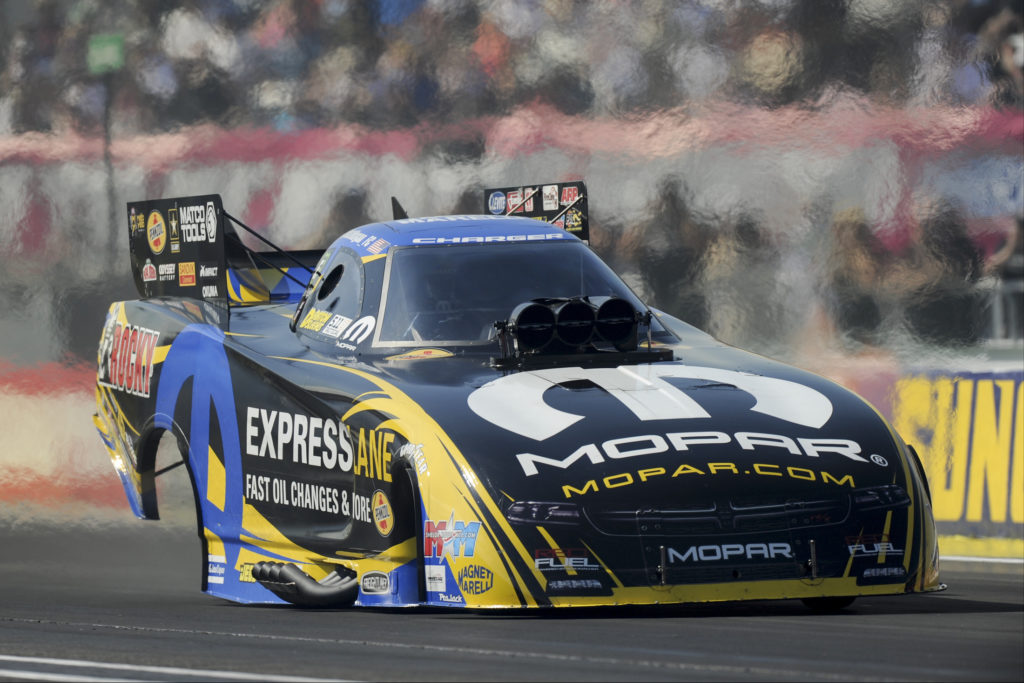 “I’m just tickled to death to be out here right now,” said Hagan, a two-time Funny Car champion.  “This is something I’ve been wanting to check off the list for a long time.  We came out here with a brand new race car, we qualified No. 1, and the car was just on kill the whole weekend.  Being able to have that confidence and see that in Dickie and this whole Mopar team, it’s been great.  That’s what it takes to win races and to win the championship.  I really feel like this car is starting to peak at the right time.”

Heading into the Countdown, Ron Capps will lead the way with a 30-point advantage over Del Worsham, Hagan, Courtney Force and Jack Beckman.  Alexis DeJoria sealed her deal holding onto 10th place after Chad Head was defeated in the quarterfinals.

In the NHRA Traxxas Shootout on Sunday, it found Courtney Force winning her first special event race and $100,000 from her own sponsor of her John Force Racing Chevrolet, defeating her teammate Robert Hight in the finals. 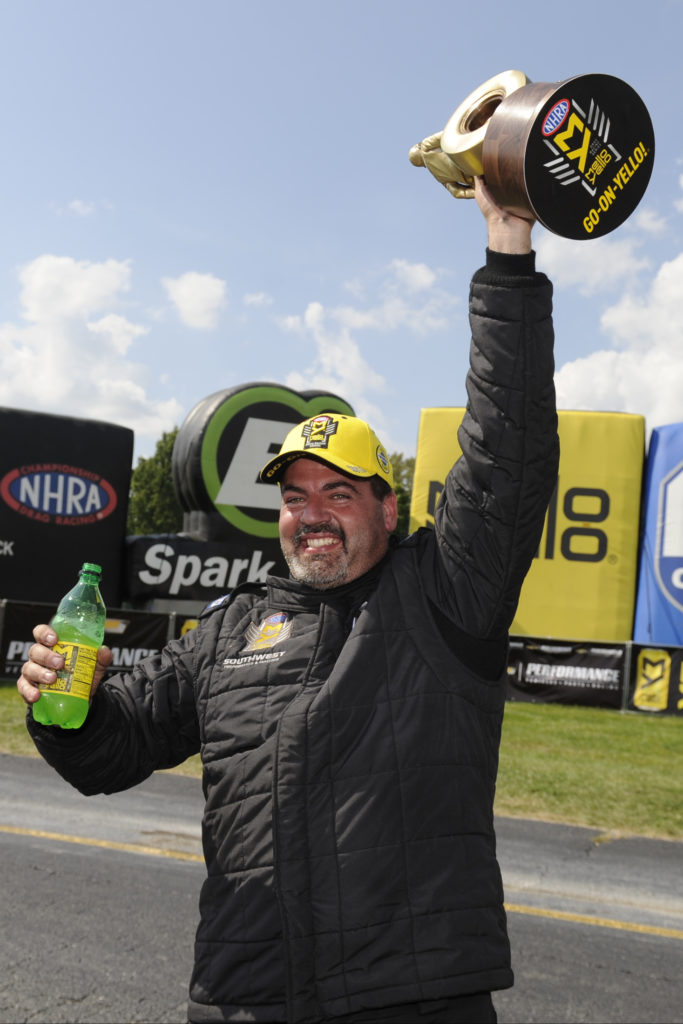 As the tree came down, McGaha let off the clutch with a .020-second reaction time – giving him .024-second advantage over Johnson, who came into this round with lane choice.

McGaha hit every shift as he traveled down Lucas Oil Raceway and as they reached the finish line, McGaha could see the front end of his Chevrolet Camaro was ahead of Johnson.  McGaha clocked in with a time of 6.688 seconds, 207.15 mph and edged out Johnson’s 6.715, 207.08 to take the win. 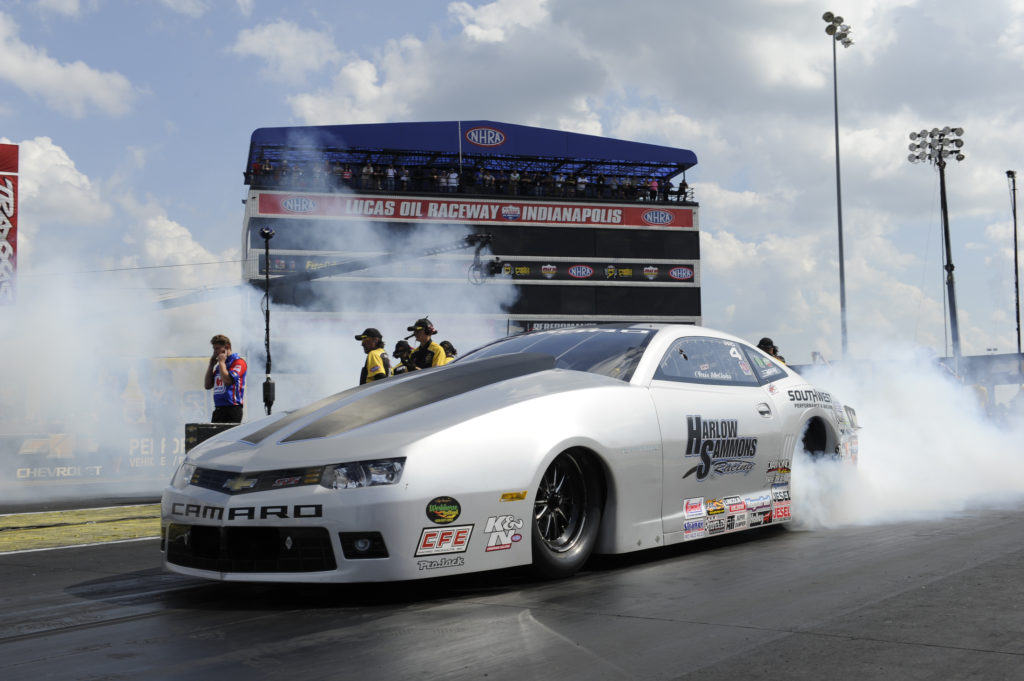 McGaha came into this weekend with no round wins at Indy and on his fifth anniversary, he did what every racer in the NHRA dreams of doing; winning the Big Go.

“We have to keep up what we did today in the Countdown,” said McGaha, now a four-time Pro Stock winner.  “If we do, we definitely have a shot at winning the Championship.  We botched a lot of runs along the way this season and we shouldn’t be entering the Countdown in seventh but this win is a huge confidence booster.  We just have to keep winning and we might just have a chance at the Championship.”

In the makeup rain delayed August Pro Stock finals from Seattle, it took Vincent Nobile just a thousandth (.001) of a second to red light, giving Aaron Strong his first ever Pro Stock victory. 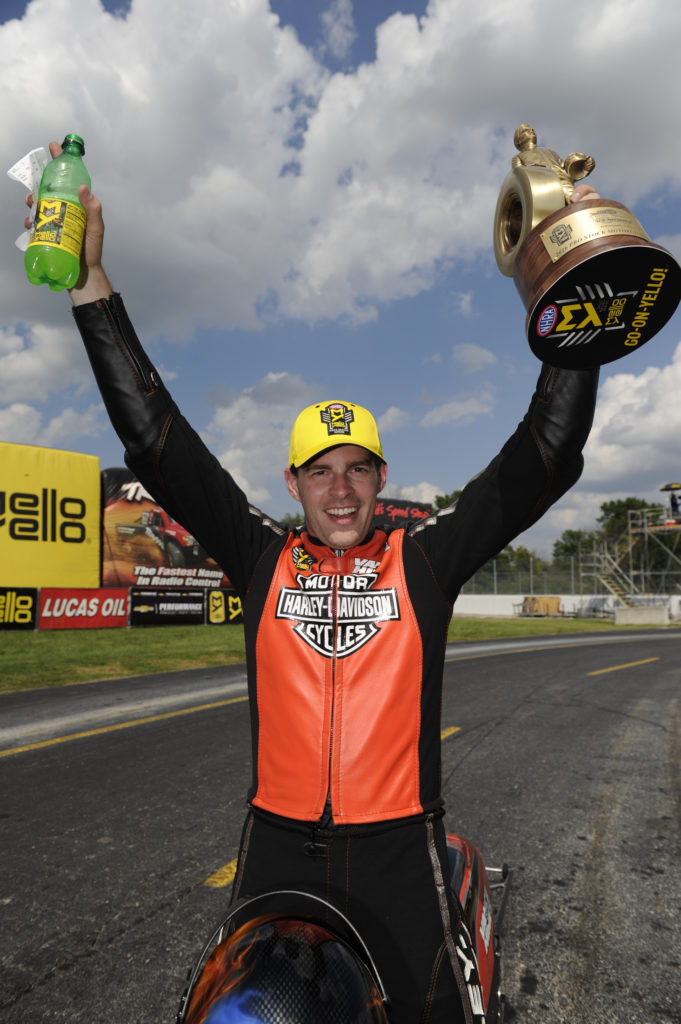 Andrew Hines took over the Pro Stock Motorcycle points lead by riding his Vance & Hines Harley-Davidson to a 6.682-second pass at 194.63 mph in the final round to beat Hector Arana Jr., who red lighted on his Buell.  He earned his 47th career win, fifth of the 2016 season and second at Lucas Oil Raceway with the effort.  The winningest Pro Stock Motorcycle racer in NHRA history beat rookie Melissa Surber, alligator farmer Jerry Savoie and Sonoma winner LE Tonglet in the earlier rounds.

“I’ve had a good motorcycle as of late, but it hasn’t been qualifying well,” said Hines, a five-time Pro Stock Motorcycle champion.  “I knew the potential of my Harley.  I knew I had a bike that could go rounds and we just had to pick on it here and there.  We’re getting closer to something that will work for us in the heat.  We got to the final round and figured out the tune-up that needed to be in there.  I’m happy I made my best run of the weekend in the final round.” 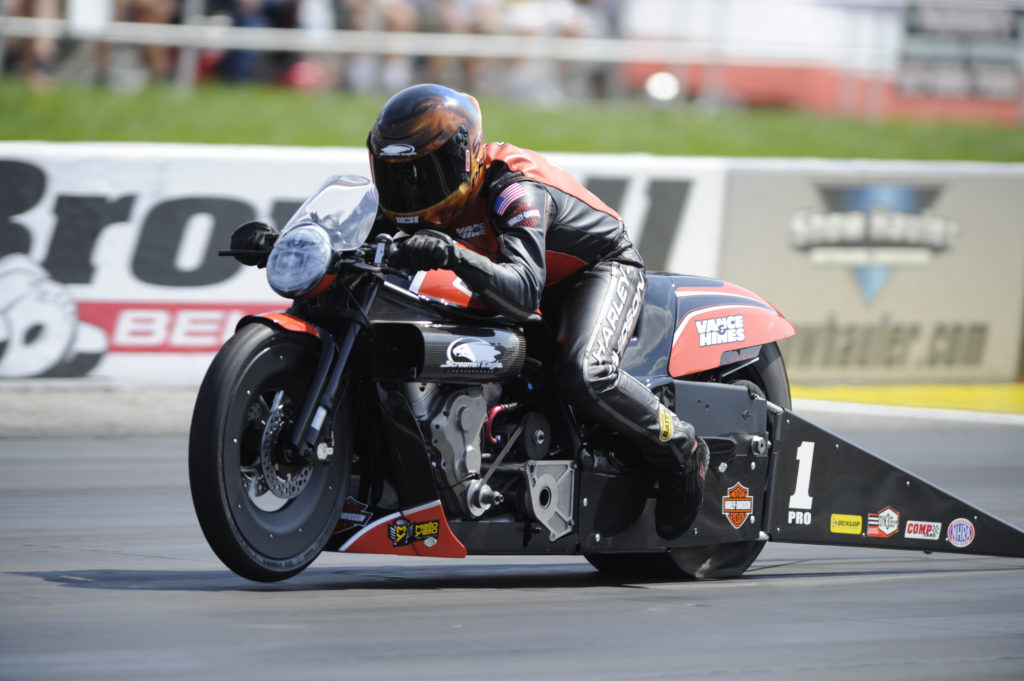 The 2016 NHRA Mello Yello Drag Racing Series will continue with the NHRA Carolina Nationals, Sept. 16-18, at zMAX Dragway in Concord, N.C.  The event is the first race of the six-race NHRA Mello Yello Countdown to the Championship playoffs.