Father’s Day weekend was an extra special one for 10-time World of Outlaws NOS Energy Drink Sprint Car Series champion Donny Schatz. Like many of us who spent time with our dear ole dads, giving gifts and doing things that he enjoys, Schatz gave the patriarch of his family the biggest gift that any motorsports legend can be given – a historic 300th career win.

After a trying four-month stretch to open the 2021 season, a span that was perhaps more adversity-filled than any other throughout his iconic 25-year career, Schatz finally broke into the win column on Friday night in Dubuque Fairgrounds Speedway. From the start of Friday’s events Schatz was feeling good, including timing sixth-quick in Slick Woody’s Qualifying, winning his Dryden Heat Race, and running third in the DIRTVision Fast Pass Dash to earn a second row starting spot in the 30-lap NOS Energy Drink Feature. Looking like things were finally falling into place, Schatz would be rather disappointed until Lap 12, when a wild turn of events sent both leader Aaron Reutzel and second place David Gravel to the work area with flat tires.

“I was playing it cool back in the pack when David cut his tire, so I went into conservative mode,” Schatz noted on his driving. “After the red flag flew, I got pretty nervous having my tires sit that long. Despite this I knew that I had to get my elbows up, so I didn’t let this victory get away from me.” 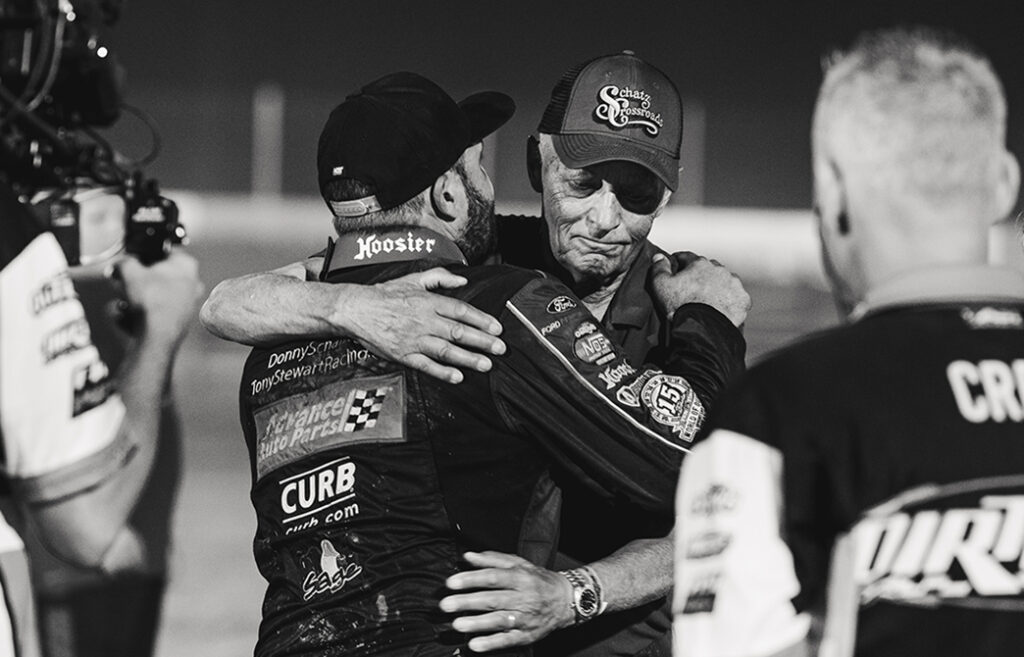 Following the wave of the green flag, Schatz put everything he had into putting his Tony Stewart/Curb-Agajanian Racing ride in victory lane. As the son of legendary driver Danny Schatz continued to lead the field as the laps wound down, fans seemed to be holding their collective breaths, especially when the caution flag flew on the final lap. Despite James McFadden and Sheldon Haudenschild taking him three-wide for the win, Schatz blasted around the top of the track to race to his 300th career win.

“This win hasn’t really sunk in yet because I thought it was going to happen about 15 times already this year,” said Schatz. “That is the way racing and life seem to be though. Sometimes the best things come to those who wait. I am glad that my father was here for this one because he does not get to go to all of these events anymore.”

With this victory, Schatz not only gets to celebrate an extra special Father’s Day, but also joins Steve Kinser and Sammy Swindell, as the only three drivers in 40+ years of the World of Outlaws to race to 300 career victories.

Schatz will have an opportunity to chase down career victory number 301 during this week’s World of Outlaws Huset’s 50 Presented by BillionAuto.com June 21st-22nd. Stay tuned to RacingJunk.com for the latest news from the dirt!