The “Rock” theme was Kuryakyn’s take on a matching 2015 Road Glide and Epiphone Sheraton II guitar honoring the Buffalo Chip’s 35th anniversary in 2016. The paint scheme for this bike was carefully designed to capture the natural rhythm and artistry of music. 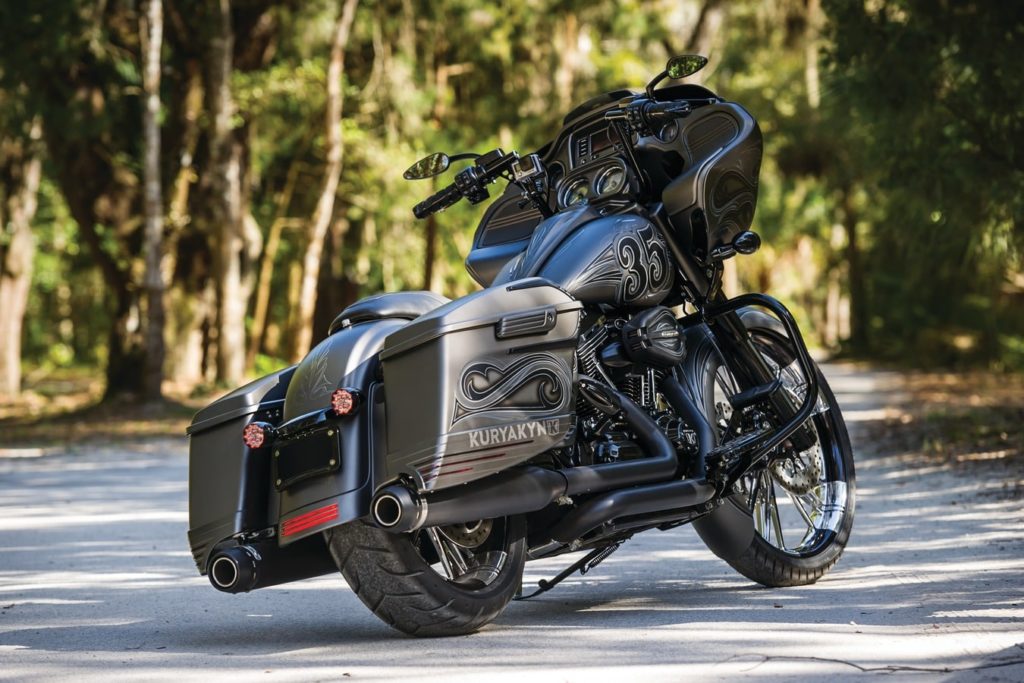 Elaborate, intricate pinstriping captured the resonating flow of a great guitar solo or memorable chorus. The Road Glide’s power can shred a street pretty well too, with 93 horsepower and 113 ft/lbs of torque.

The “Rumble” was a racing-inspired Street Glide: raw, refined and right at home for the introduction of the Buffalo Chip’s exciting Moto Stampede in 2017. An industrial flavor permeates this hefty build, which features as a focal point Kuryakyn’s Hypercharger ES air cleaner. This part features electronic throttle response butterfly engagement, leading to an interactive experience with the bike that can’t be found elsewhere. 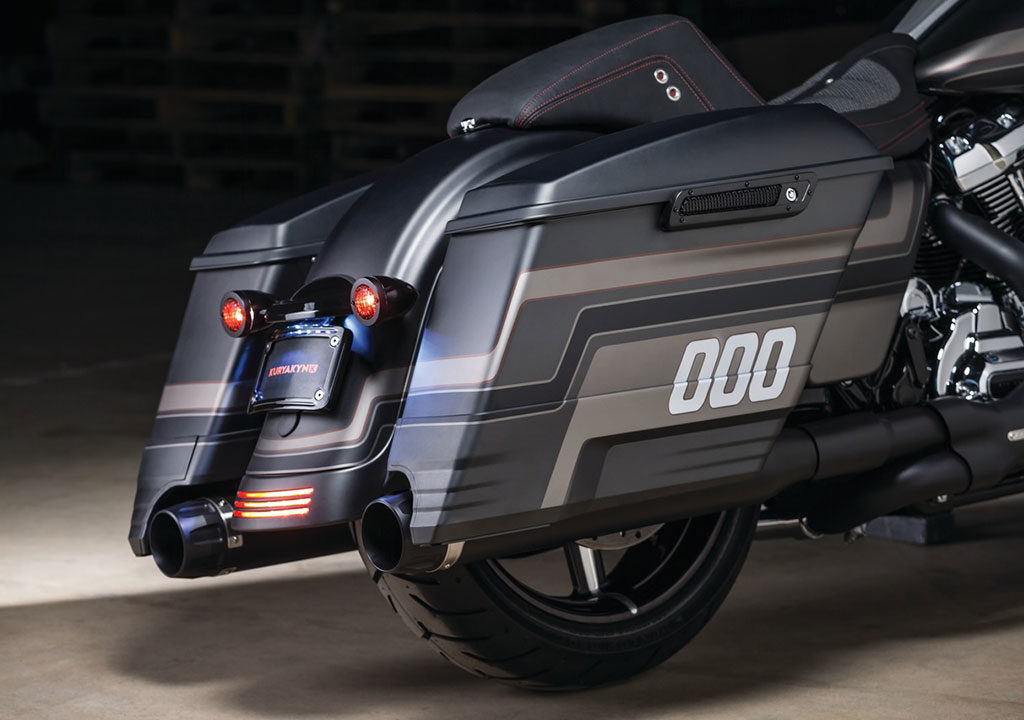 As with both other installments, the “Rumble” build benefited greatly from collaboration with a host of impressive auto parts manufacturers.

This year’s canvas, a 2018 Indian Chieftain Dark Horse, represents the tens of thousands of bikers who leave the daily grind behind for nine days of music and full-throttle “Rebellion” at The Chip.

“The Rock, Rumble & Rebellion bike builds have given us a unique outlet to express our creativity and passion for riding,” said Kuryakyn President Holger Mohr. “These projects become so much more than just promoting our products on bikes. We’ve had fun and great success creating builds that showcase our design capabilities and celebrate everything about motorcycle culture we love as riders: great music, freedom and adventure. This year’s design concept was all about representing the loud, bold, brash and rebellious icons that bikers connect with through music. And no venue merges music and motorcycle culture like the Buffalo Chip.” 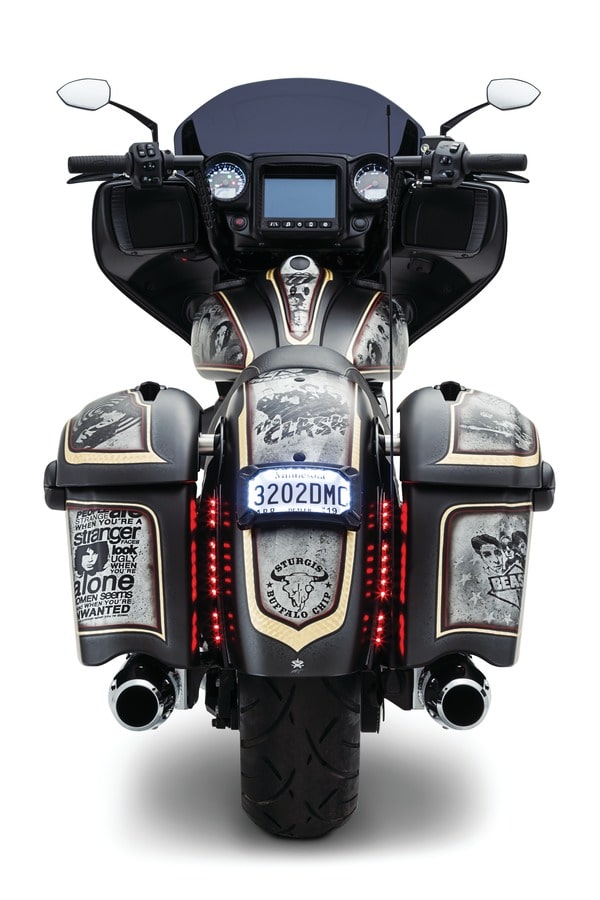 Choosing an Indian Chieftain Dark Horse was the first step in giving shape to the “Rebellion” theme. Kuryakyn designers chose to meet the challenge of creating a rebel build by giving the classically styled platform a very different new look. Accessories from the new Kuryakyn Phantom and Aztec collections, the Orbit L.E.D. line and products from the Vantage Signature Series by John Shope and Hardline Signature Series by Fred Kodlin give the Chieftain Dark Horse a look with modern style and attitude.

Bringing together Kuryakyn’s vision with the energy of the Largest Music Festival in Motorcycling is the work of renowned Austrian artist Marcus Pfeil’s, whose custom flavor is found on every available inch of the bike. This feature has made the “Rebellion” build the most photographed and talked-about installment of the Rock, Rumble & Rebellion build series.

“The Buffalo Chip’s history of integrating live music into the Sturgis Rally provided a lot of inspiration,” said Marcus Pfeil, owner of Pfeil Design. “With a theme of ‘Rebellion,’ we wanted to create something that everyone could relate to. Music is universal; it’s an escape. It all came together exactly how we envisioned, and I’m honored to be part of this project and experience a new level of American motorcycle culture.” 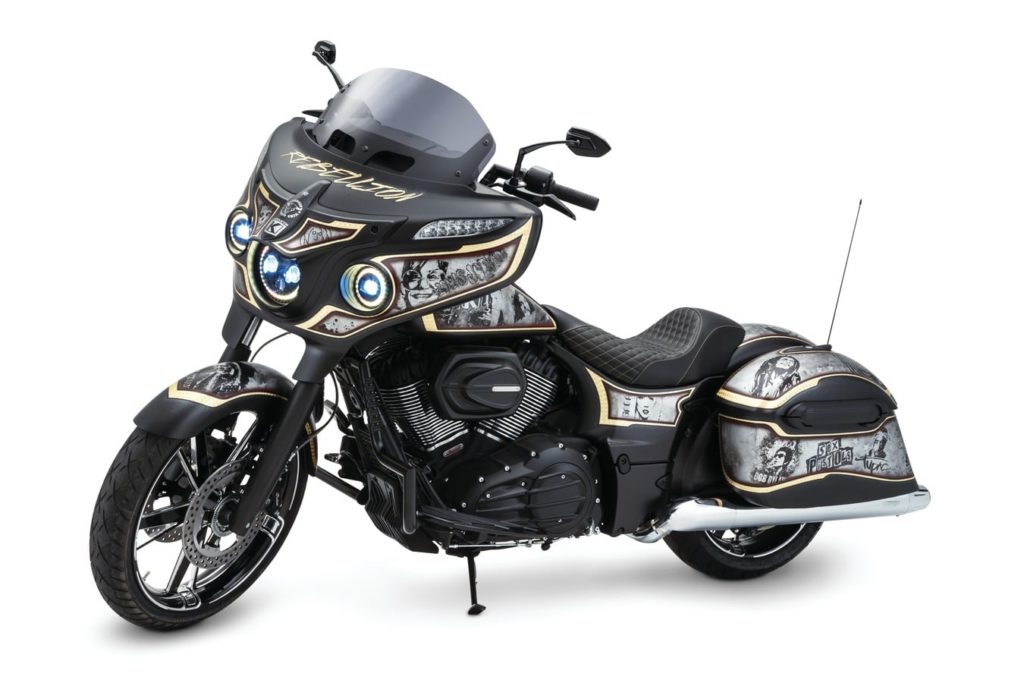 The paint marries a smooth metallic satin black base to accents in a metallic grey with a “grunge background” effect, as described by Pfeil. He also granted the bike what he calls a “real steel” effect, which gives a brushed steel appearance to various panels of the bike. The panels are framed by hand-pressed 23-carat gold leaf. The pièce de résistance is the inclusion of black and white airbrushed silhouettes of a host of revolutionary musicians and bands seen throughout, all of whom portrayed rebellion through their musical mastery and raw, provocative approach.

“I had the opportunity to ride the 2018 Rock, Rumble & Rebellion bike in the Legends Ride, and it was a showstopper,” said Sturgis Buffalo Chip President Rod Woodruff. “People were gathering to take photos of the music icons painted on the bike, looking for their favorite and pointing out the custom parts that set the bike apart. The effects Marcus used to depict the legends of rock and roll are simply outstanding. Kuryakyn put together a timeless motorcycle masterpiece that really defines what the Buffalo Chip is all about.”

For more photos and information including a full parts list, visit www.kuryakyn.com/blog.