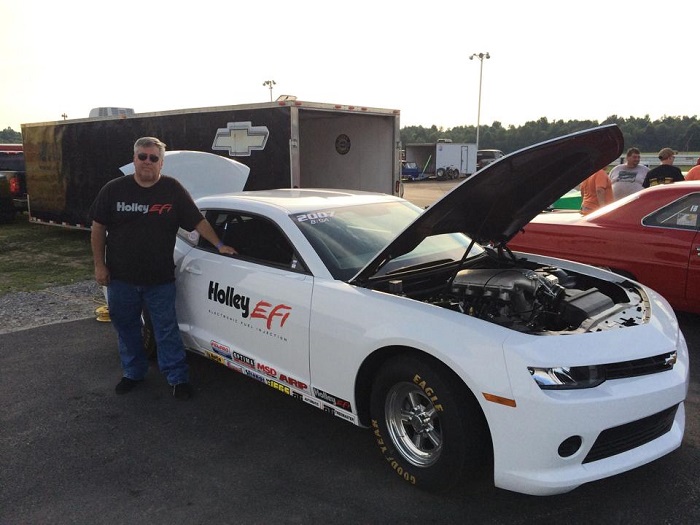 Although he did not campaign in Daren Poole-Adams’ 2014 COPO Camaro full-time in 2015, “Uncle” Robin Lawrence is no stranger to the drag strip.  When he isn’t keeping busy as Holley’s EFI Technical Sales and Motorsports Manager, he typically is hanging out at drag strips across the country.

Lawrence is credited with the first 9-second pass in NMRA Real Street and he held the title of driving the fastest nitrous-fed LSx powered car until March 2013 by making a 7.77 second pass at 179 miles per hour in his ’69 Nova.  This experience helped shape his success at the NHRA Midwest Nationals.  He qualified 59th in a field of 61 cars, but the rest of the race went differently.  Lawrence beat driver after driver, moving on to the semi-finals.  In the semi-finals, he found himself .003 seconds behind Britt Cummings, but it’s important to keep in mind that going from 61 racers to the round of four is impressive for a driver that is not full-time.

Lawrence was essential to Holley’s involvement in the COPO program from its early stages to today.  Lawrence stated, “Since 2012, we have had a close relationship with the COPO program.  This relationship has allowed us to use Daren’s Camaro and experience the car, our Hi-Ran intake, and our HP EFI system as any other customer would.  We share this feedback with our engineers to ensure that Holley is staying ahead of the competition and that racers are satisfied with our products.”

Lawrence is piloting a 2014 COPO Camaro, which is powered by a 350 cubic-inch LSX-based powerplant.  Holley’s HP EFI ECU is controlling everything under the hood of every 2013 and newer COPO Camaro.  This ECU has all the features that have come to be expected of an aftermarket standalone engine controller without the hassle of learning the intricacies of programming and using other systems.  The HP ECU features a powerful data logger, integrated boost control, 4 stage progressive nitrous control, water/meth injection control, self-tuning fuel table strategy, a unique lb./hr. based fueling strategy to simplify the tuning process, and dozens of other features.  This ECU has the ability to be used with virtually any 4, 6, or 8 cylinder engines unline a plug and play solution, which is offered for LS-based engines.

Every naturally aspirated COPO Camaro powerplant is topped with a Holley Hi-Ram intake.  The Hi-Ram intake features a completely modular designs.  What this means is that whether your LS is of either the cathedral of square port variety, carbureted or fuel injected, naturally aspirated or utilizing forced induction, Holley has an intake to suit your specific application.