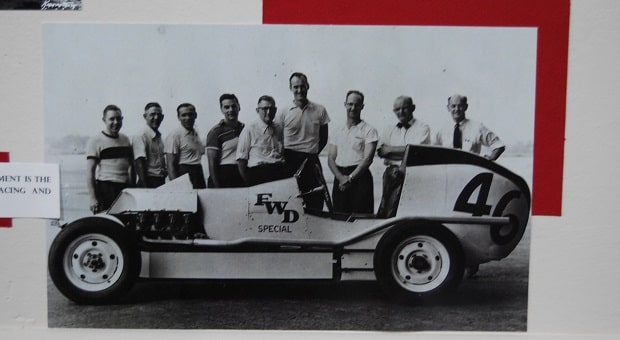 Auto racing is a diverse field. Some cars race in a circle, others in a straight line. Some racing cars are modified street machines, others are all-out race cars. Some races are indoors, but most are outdoors. Most race cars have rear drive, some have front-wheel drive and very few have had four-wheel-drive.

The history of FWD was covered in the book’s second chapter, “The Company That Backed into History.” It talked about the military vehicles that FWD built for World War I and about FWD snow plows. It discussed FWD fire engines and told the story of two racing cars housed in the FWD Museum.

Harry Miller built the 1930s FWD racing car. This came about after Walter Olen persuaded FWD’s directors that they should enter a car in the Indy 500. Olen was a lawyer who turned FWD into an established company after machinists Otto Zachow and William Besserdich invented a U-joint that made it possible to power all four wheels of a vehicle at once. WWI military-vehicle production put FWD on the international map. By 1930, things were humming.

The FWD Special race car was a promising machine with a 300-hp Miller V-8. Its top speed was estimated at 175 mph. Wisconsin native Harry Miller and famed race driver Barney Oldfield were put in charge of the Indy car. It was raced at Indy by Bob McDonough in 1932 and by Frank Brisko in1933.

In 1934, the V-8 was replaced with a four-cylinder engine. Brisko started the race that year, but an oil leak sprayed him with hot lubricant. Rex Mays took over and finished 9th at an average speed of 98.7-mph. Mauri Rose drove the car in 1935. He was third when a broken manifold stud put him out on the 177th lap.

In 1936, Rose drove again and placed third in the 500. He probably would have won the race if it weren’t for a limit placed on the size of the gas tank. Late in the contest, Rose was forced to stop for fuel and the other cars lapped him.

In 1948, William F. Milliken Jr., a scientist at the Cornell University Aeronautical Laboratory, borrowed the car to do research on four-wheel-drive vehicle handling characteristics. Milliken entered it in Sports Car Club of America (SCCA) races. In 1950, he entered Vermont’s Equinox Mountain Hill Climb and set a national record for the event. The car returned to the original FWD Museum and was later sold to a man who has a car collection in Salt Lake City, Utah.

The second racing car with links to FWD is the “Butterball Special.” It has a 4425cc 380-hp Steyr aircraft engine that can move it along at 150 mph. The car was built by Englishman A.J. Butterworth. He crashed it in 1951 and sold it to Milliken, who then raced the four-wheel-drive car from the fall of 1952 until the fall of 1957. It was then shipped to the FWD Museum, where it has been ever since.

When we visited the FWD Museum in 1980, it was a very small collection housed in the tiny old Zachow and Besserdich machine shop. That building is still part of the collection today, but the FWD Museum is in the process of moving into a much larger facility in Clintonville where the wonderful FWD-Seagrave archives (FWD bought Seagrave Fire Trucks in the 1960s) will have a great new home. The vehicle collection itself has increased from 13 units to nearly 60 units.

The man spearheading the expansion and reorganization of the collection is car enthusiast Mark Thomas, who was born in Clintonville and now resides in Birmingham, Mich. Thomas recently gave RacingJunk an exclusive tour of the new museum, which is located in a former Topp-Stewart Tractor Co. factory.

For racing fans, the Butterball Special will be on display, along with many photos and a great deal of historical documentation related to it and the 1930s FWD Special racing car. The museum is operated by the Four Wheel Drive Foundation, 79 8TH St., Clintonville, WI 54929. Internet users can visit www.fourwheeldrivefoundation.com for information about the hours of operation.