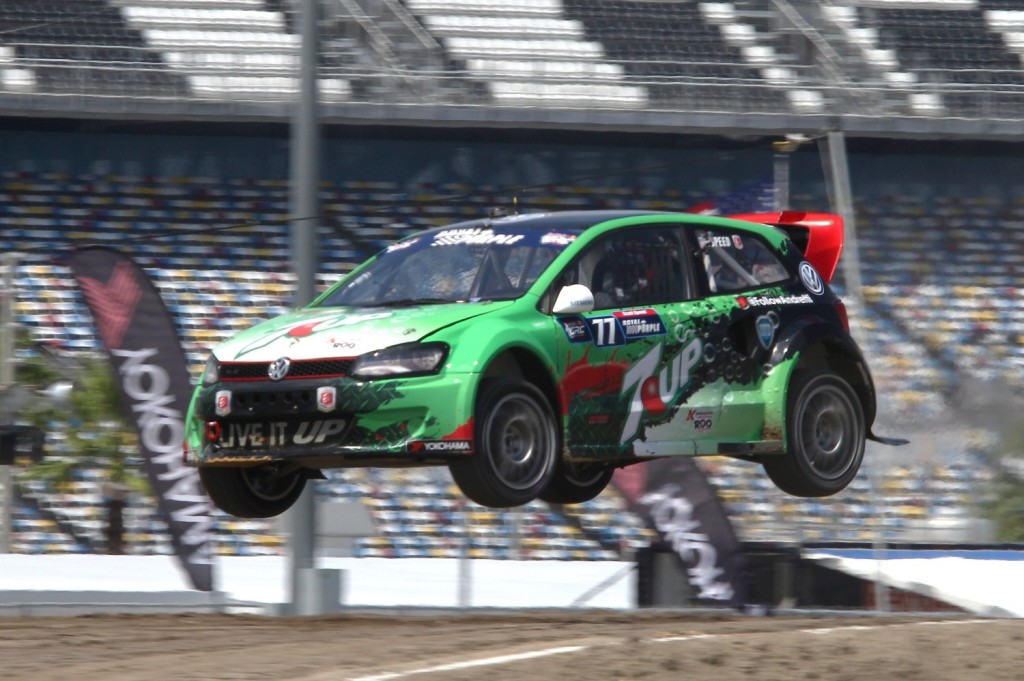 The Supercars were out in full force this weekend at the Red Bully Global Rallycross championship at Daytona International Speedway, flying, jumping and barreling along at intense speeds.   The course was a 13 turn, .924 mile layout, the longest and most complex of the 2014 season so far, built within the track’s famed International Horseshoe. These 600hp+ Supercars  can hit speeds in excess of 124mph on the straights, so watching them navigate the twists and turns, ups and downs was an adventure indeed.

Saturday had to be one of the hottest days on record and the fans came out in support of this first time event in droves, nearly 3000 attendees cheered for the epic contests on Saturday. Luckily, most  brought umbrellas, not for the usual rain, but shade! The race course was blisteringly hot also, as competitors battled for all important points in this, the sixth of ten races to be held in the US and Barbados.

Two divisions make up Rallycross, the Supercar and the Lites, with the Lites making about 300 hp to the doubled power of the bigger engines. The drivers come from all disciplines of racing, including Formula One and NASCAR. With names like Tanner Foust, Bucky Lasek (skateboarder), Ken Brock, Nelson Piquet Jr (NASCAR) and Rhys Millen (Rally Driver), there was plenty of competition to go around. They all have their own special set of skill, and are vying for a slice of the estimated $500,000 full season purse. Battle too, they did as there was no shortage of bumping and banging around the dirt and asphalt course.

Rhys Millen (#67 Hyundai Velloster Turbo) slipped, slid, scratched and clawed his way to victory. It was his first this season and he held off a hard charging Ken Block (by 1.8 seconds!). Mitchell DeJong dominated the Lites Final.

The Burnout was there to catch some of the wild SuperCar action in person. Check out the photos  in the gallery.

About Gary Rosier 78 Articles
Gary Rosier took up photography 4 years ago in his retirement, but has discovered a passion for covering automotive and aeromotive events, particularly around Daytona Beach, FL. You can also find him on Facebook and his own site http://www.carsplaneslandscapes.com.