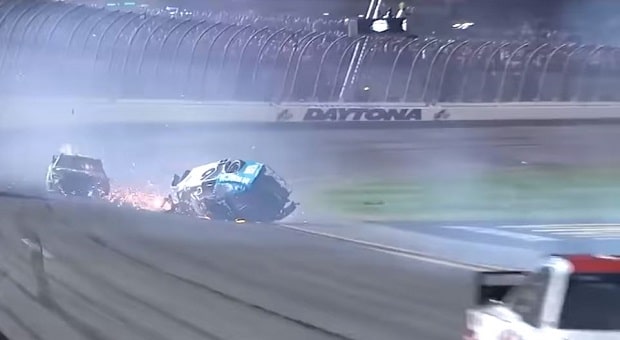 Both fans and fellow motorsports stars all over the world are turning their thoughts to another injured driver today. Following a pretty frightening crash during the final lap of the Daytona 500 last night, Roush Fenway Racing driver Ryan Newman was left in serious condition at Halifax Health Center, in Daytona, Fla.

During his attempt to take the checkers in the most prestigious race of the season, Newman was leading the final lap of this race when Ryan Blaney’s bid for the lead sent Newman crashing hard into the wall and ultimately flipping onto his roof. Newman’s car was struck again in the driver’s side before bursting into flames.

Fans and drivers began to get a sick feeling in their stomachs that many described as reminiscent of the last lap crash which took the life of Dale Earnhardt almost 20 years ago, after safety crews used solid black barriers to block the view while the 2008 Daytona 500 winner was extracted from his smoldering, destroyed Ford Mustang and placed in a waiting ambulance to be transported to Halifax hospital.

Everyone waited with baited breath until NASCAR finally read a statement from Roush Fenway Racing two hours later that indicated the veteran NASCAR driver was in “serious condition, but his injuries are being indicated as non-life threatening.”

As Newman continues to recover from this scary incident, members of the racing community have continued to pour in their continued wishes and prayers of support and healing all over social media.

I watch my brother go through the same thing, please Lord Protect him as you did my brother. #prayingforRyan

Whether you’re a NASCAR fan or not we all need to pray for Ryan Newman. The most important job a man can have is being a dad and his little girls need their father to be okay. 🙏🙏 #prayingforRyan #ryannewman #NASCAR pic.twitter.com/yiVRAHKaGD

This is an answer to prayer!! Our team at the @CLTMotorSpdwy are both thankful and encouraged by the update on @RyanJNewman but will continue to pray for his recovery. #prayingforRyan #RyanNewman #NASCAR https://t.co/q0zuU0ZzZ4

Our very best wishes also go out to this veteran driver, and we hope he has a speedy recovery.