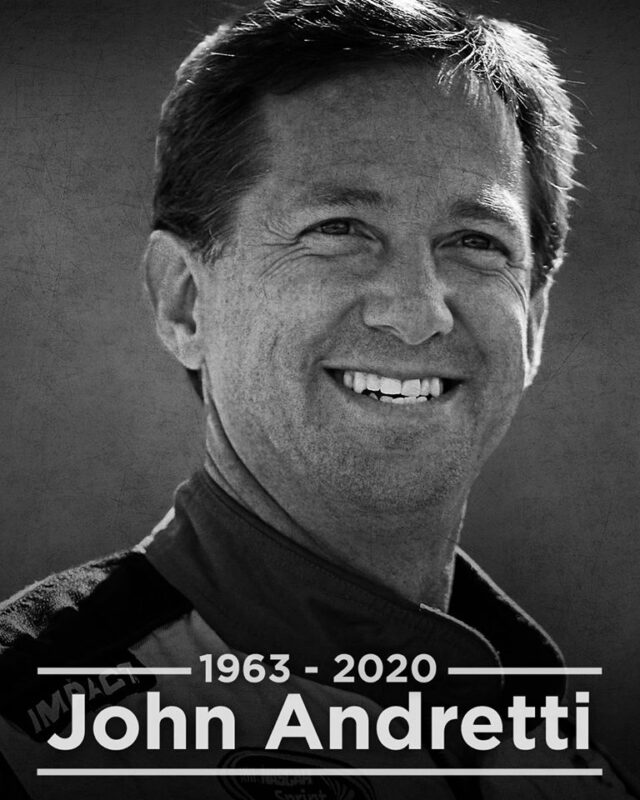 As the 2020 racing season begins to unfold many drivers and fans were left awestruck today after hearing about the passing of racing legend John Andretti. The nephew of Mario Andretti spent the last three years battling colon cancer and after a hard-fought battle passed at the age of 56-years-old.

Much like his famed uncle, John raced in a variety of series and was the first driver to attempt the Indianapolis 500 as well as the Coca-Cola 600 on the same day. John also made 49 consecutive IndyCar starts in the early 1990’s before moving to NASCAR, where he started at least 29 races every season from 1994 to 2003 and even raised money for Riley Children’s Hospital in Indianapolis through his initiative Race 4 Riley.

Members of Andretti Autosport announced the passing of their beloved member this afternoon and after members of the racing family took to social media to share some of their favorite memories.

It with the heaviest of hearts, we share that John Andretti has today lost his battle with cancer. John was a loving husband and father, a devoted son and a trusted cousin. He was a philanthropist, an advocate for the sport, a dedicated teammate, a driven competitor and most importantly a dear friend.

Through Race4Riley, John spent decades dedicating his time and fundraising attention to Riley Hospital for Children. When first diagnosed with colon cancer in 2017, John vowed to fight back and use his voice to help spread the word of prevention and early detection. He fought hard and stole back days the disease vowed to take away. He helped countless others undergo proper screening, and in doing so, saved lives.

We will forever carry with us John’s genuine spirit of helping others first and himself second. Our prayers today are with Nancy, Jarett, Olivia and Amelia, with our entire family, and with fans worldwide.

We urge all our followers to, please, #CheckIt4Andretti.

A.J. Foyt on the passing of his godson John Andretti, who succumbed today after a lengthy battle with colon cancer:

“My deepest condolences to the whole Andretti family. This is a very sad day. I was John’s godfather and it seemed the older we got, the closer we got. He called me about a week and a half ago and he sounded tired but I didn’t think it would happen this quick. When Mario called me, it really caught me off guard. I thought John had more time. John was really a fighter and he fought this long and hard. There was no harder fighter than him. It’s a terrible shame. Whenever and wherever they have his service, I’ll be there.”

“John’s passing is very difficult to comprehend right now, as he has been a close friend for many years. John was so upbeat and so strong throughout his cancer battle, demonstrating great strength, spirit and compassion as he did throughout my entire friendship and working relationship with him. I first met John back in 1984 through our mutual BMW association and knew of his passion to race in the Indy 500. On behalf of our whole Dreyer & Reinbold Racing team, I want to extend my condolences and prayers to Nancy, Jarett, Olivia, Amelia and the entire Andretti family during this challenging time. John was a standard bearer for the city of Indianapolis with his tireless effort to raise funds for Riley Hospital for Children. His legacy in Indy and the motorsports world will continue for decades to come. God Speed, my friend.”

John Andretti, whose racing career took him to a vast variety of disciplines from USAC National winner and Regional Champion, to Indy Car, NASCAR, Sports Cars and even Top Fuel Dragsters, passed away Thursday at the age of 56.

Hometown hero for me @John_Andretti passed away from colon cancer #checkitforandretti . Pictured here in 1982 at Dorney Park Speedway. pic.twitter.com/CRWO4OqDQs

it is with a heavy heart that i post this. former driver of the #43 john andretti has passed away from cancer at age 56. he drove the 43 car in 94 and 98 to mid 03. john’s passing is a tough for me his win was the third time i saw 43 win rest well MR. andretti. #checkitforjohn pic.twitter.com/t3485xHq4M

We’ll remember John Andretti for moments like these. In the Spring of 1999, he led 24 laps at Richmond, taking the lead from none other than @JeffGordonWeb to do it.#CheckItForAndretti pic.twitter.com/GaI7seVY5R

We at RacingJunk.com send our condolences out to the entire Andretti family as well as each and every member of this racing family.

4 Comments on Racing World Mourns the Loss of John Andretti