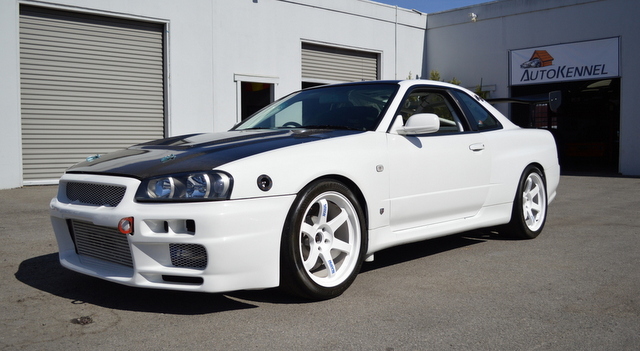 It’s no secret that you can purchase just about anything on RacingJunk’s classifieds, and this recent find is a perfect example.

This listing was spotted on our Twitter feed by RJ’s director of business operations (proof that we’re all car enthusiasts here), and after noticing that it was on consignment with the Auto Kennel in sort-of-nearby Costa Mesa, California, I made my way to see this legendary machine in person.

Since Nissan never released the R34 Skyline GT-R in the states, you’ll only find it in a right-hand drive configuration. The car’s popularity has had a surge thanks to videogames and movies; the late Paul Walker piloted a GT-R in Universal’s (regrettable) blockbuster movie 2 Fast 2 Furious. This particular GT-R, chassis #1223, was campaigned by the Susuki Racing Mechanics Team (Japan’s oldest continuous racing team) in a handful of Japan Grand Touring Car Championship (JGTC) races as well as the Super Taikyu, both of which are endurance style series.

After 2003, the car was retired from professional racing and restored by Nismo. Since its trip state-side, the GT-R has had a few upgrades and was dyno-ed at 540 hp and 433 lb ft. of torque; it’s basically track-ready, save for a set of new tires.

This track monster, known to many as simply Godzilla, can be yours for a mere $120,000. If you’d like to see this ultra-rare race car in person, the Auto Kennel will be driving it to Cars and Coffee in Irvine, California on Saturday morning, February 15, 2014.

In the meantime, here’s a short teaser video: