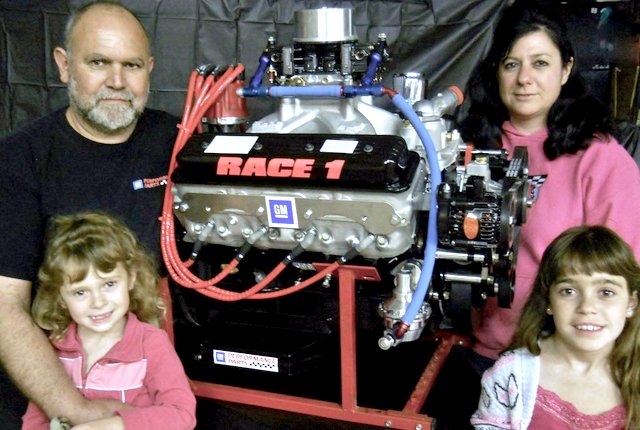 When you call Race 1 to talk engines, you’ve come to the right place. It has been in business since 1990 and like other speed shops in what began in trying to get a good deal on some parts is what led Brad Hibbard to go into the high performance business of selling and rebuilding crate engines and the rest is history.

“In the beginning Race-1 had quite a few adventures into different things as at one time we owned a shock company that was successful for about seven to eight years,” said Hibbard. “Then came along the crate program and it completely took us over. We sold the shock business and now we’re 100 per cent General Motors crate engines.”
After Race 1 sends out an engine, the performance package is added by the race teams.

“We’re basically not a race engine shop,” said Hibbard. “We have been in the engine business since before Race-1 existed. I’ve been partners with this machine shop my entire life. We do a lot of restoration work, we do a lot of dealership work, and stock rebuilds, industrial work, things of that nature.

“When the crate program came along, it just fit us. These are not performance engines. We look at them through in a different light now and can consider them performance, but in reality they come right off the production line. We’re asking the engines to do quite a bit. They are production engines with a few modifications from General Motors to fit into the application.”

Race-1 crate engines are shipped throughout the country under the scrutiny of different sanctioning bodies and the teams that are authorized to participate in the different forms of motorsports.

“We are an authorized repair rebuild facility for the N.E. Smith racing series, the RUSH Racing series, and then FASTRAK Racing Series, and then we have NASCAR affiliates and that is not the NASCAR sanction, but it’s the NASCAR affiliates that have authorized us completely,” said Hibbard. “We also have two racetracks that we completely service and no one else is permitted to service them.

“That’s what we’re servicing is the specific sealed engine program. In our program, we have to deal with the way to which GM builds it. We’re not allowed to modify it in any way. Truthfully, a very large percentage of our business is directly sealed engines from General Motors. We are an authorized repair facility for most sanctioning bodies and we do the repair here, but we have to stick to the GM specifications. You can’t veer from that one bit. So, when the engine leaves our shop, it’s exactly the same as a brand new engine someone would purchase from General Motors. They are all the same.”

Where do you see yourself in the racing industry in the overall picture of motorsports?

“I see us in the racing industry as an associate to General Motors and the crate racing world,” said Hibbard. “We’re in this for the long run. We’ll help a person who doesn’t even buy anything from us. I will spend hours on the phone with a guy who hasn’t spent a penny with me. We need those people to help the program survive. The success of the program overall is what is going help us. It’s how we’ve been doing business forever and that was how I brought up.”
When a competitor sends their engine back for repair and refurbishing, they get returned with the exact specifications they began with and can proceed from there.

“They do send us broken engines and worn out engines,” grinned Hibbard. “We are 500 deep on our rebuild list and all those 500 engines are the same. We are probably a thousand deep in our new engine sales. They are the same as our rebuild or repaired engines. The perception out there in the racing world is differences in these engines, and it just isn’t so. If you have an engine that is down on power, there’s a specific reason. Typically, they are all the same.”
On occasion, when Hibbard gets a call with a question concerning performance out of their product, he’s there to assist.

“We work real hard talking with everybody to instruct them the best way to take care of it and operate their engine,” said Hibbard. “You can make up a million spec sheets, write a ton of books and put all kinds of notices on a website, message boards, and guys will still call you up only to find out they shot themselves in the foot. There are some common issues and we really try to push on those. We’re trying to reiterate that other people have made a mistake. On the most part, people appreciate it.”

In the sealed crate engine world, technology is constantly evolving and although change is inevitable, Race-1 has a specific program they go by and will not fluctuate.

“In my sealed engine world, the engine itself can’t be manipulated and certain things around the engine that also carries specifications,” said Hibbard. “Obviously, everyone is looking for the last little bit of edge. As far technology goes, we’re always looking, always trying, but we have to do it within a specification sheet. The engine itself, we’re not allowed to manipulate one bit. That has to stay the same.

“The pieces that surround the engines, absolutely, we’re always looking and trying. That’s part of our strength. We have such a vast associate bank to pull from. We’ve developed relationships all across the world. We consider our customers as associates. When they have a problem, they call us. We may not have the answer for it, but we’ll get on the phone who we think is the best person to ask that question to and then at that point, we’ve help everybody.”
Since Race-1 goes by their strict guidelines it creates better racing on the track with all things being equal and all competitors are all starting from the same point.

“Parody is the best thing we could have,” smiled Hibbard. “You don’t want one engine to stand out from another engine. That’s the concept. These guys can actually work on their race cars and show their driving abilities. Not how much horsepower you have under the hood. When someone does find an edge, we all go to work and try to find the same edge to maintain that parody. Every little thing does make a difference and everything you do does make difference.”

The size of the facility compared to the amount of work produced is marginal as they do it with a small of amount people.

“We have two facilities,” said Hibbard. “One we called the dumping zone and we’re installing a new dyno at that facility now. The second is a pickup and drop off point, parts counter and parts inventory. We have a machine shop there.

“As far as employees, there are four of us in the machine shop and here at the dump zone, it’s just me. We try to put people on who want to work. Now that we’ve struck a very strong relationship with PACE Performance and Sweeney Buick, we’re leaning on them for some personnel. We’ve used some of their people from time to time. We don’t let people pressure us into just getting the job done.”

Race-1 is a very busy place and has the proof with the amount of fully prepared crate engines they release each week.

“We may have as many as 10 new engines leave,” said Hibbard. “As far as rebuilds, it takes us a solid week and a half to do a rebuild. We’re backed up with some 20 engines right now. Just since 2006, we’ve done over 500 rebuilds.”
What’s ahead for the crate engine program of Race-1 is anyone’s guess, but the product has proven reliable and Hibbard knows what it is going take for the future.

“We have a lot of eggs in the basket,” Hibbard said looking at what lies ahead. “I am a little concerned the engine we’re currently using for this project is old. I’m not sure it’s even in a production vehicle anymore. So I wonder where General Motors is going, but we’ll follow it. The program is big enough that they are not going to drop it completely, but rather at that time replace it. The crate racing world has grown so big I don’t see how they can possibly even change it. Change is evitable, always. Even if GM would quit making this type of engine, it would be years before it would be completely gone.

“We are usually swamped and have grown so quickly, that we’re not looking at the future, we’re looking at getting done today our commitments that we’ve made. Honestly, we grew too fast. In just the last two years, we’ve really, really grown and we couldn’t keep up with personnel wise. We’re in a situation where we can’t make a mistake because we under the scrutiny of that specification book. You never want to make mistakes where you have failures. If we made a mistake outside the guidelines of General Motors specifications, it would mean the end of our business as we know it. These engines are constantly being protested at race events and torn down. If there is one single piece that is out of specification, we’re done. That’s why we have to scrutinize our work. Take all the time it takes to make it correct.”

With questions and inquiries, information can be found on Race-1.com or contact Brad Hibbard at (330) 540-7223 or via email at [email protected]