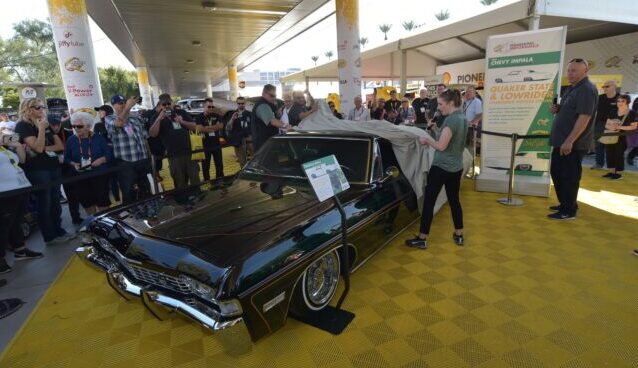 Quaker State teamed up with Lowrider last week during SEMA 2019  to reveal a custom 1968 Chevrolet Impala to benefit a children’s’ charity. Lowrider and Quaker State plan to take the ’68  Impala on a tour around the United States throughout 2020, making appearances at various automotive shows, motorsports races, customer engagements, and Lowrider MeatUps in an attempt to build up communities and fight against bullying.

At the Shell “Pioneering Performance” Experience, Joe Ray, Editor-in-Chief of Lowrider, spoke about the build process with Jaclyn Chastain, Quaker State Marketing Manager, John Chiboroski, Influencer & Grassroots Marketing Manager for Shell Lubricants and Rudy Rivas, General Manager of The Lowrider Network,on how Lowrider chose the vehicle and collaborated with Quaker State to customize the ride for a good cause.

RJ’s Bobby Wayne Stauts got the opportunity to catch up with Joe Ray at the Shell “Pioneering Performance” Experience. (Excuse the band playing halfway through)

“It’s continuously been a goal of mine and Lowrider to not only bring awareness to the lowrider community but also give back to those who need it most, in this case, children,” said Ray.“This Impala is special to us and we’re grateful to the folks at Quaker State to give us a platform at the SEMA Show to introduce the vehicle to the masses and we’re excited to take it on the road next year for the rest of America to see.”