A couple of years ago, my friend Chuck Mandic decided to treat himself with an American Muscle Car. Being a Mopar guy (There’s no power like Mo’ Power!), he knew it had to be a Challenger. The older, classic Challengers he looked at were nice, but they weren’t built for the twisty type of driving that Chuck likes to do. Almost without exception, those beautiful beasts were built for straight line driving and Chuck wanted something that wouldn’t handle like an overloaded dump truck when hitting the turns. So, Chuck decided to pick up a 2014 Dodge Challenger SRT/8 392 Hemi.

I’ve got to admit that the factory specs for Chuck’s Charger are pretty impressive. The big 6.4 liter Hemi V8 engine puts out an impressive 470 horses at 6000 revs and turns the wheels with an earth shaking 470 pounds-feet of torque at 4,200 revs.

These numbers are more than plenty to give it enough acceleration to push you back in your seat without even stalling up the torque converter in the six-speed manual transmission. How does zero to 60 in about four seconds grab you for a car this size? But these numbers weren’t impressive enough for Chuck to accept. He needed more. 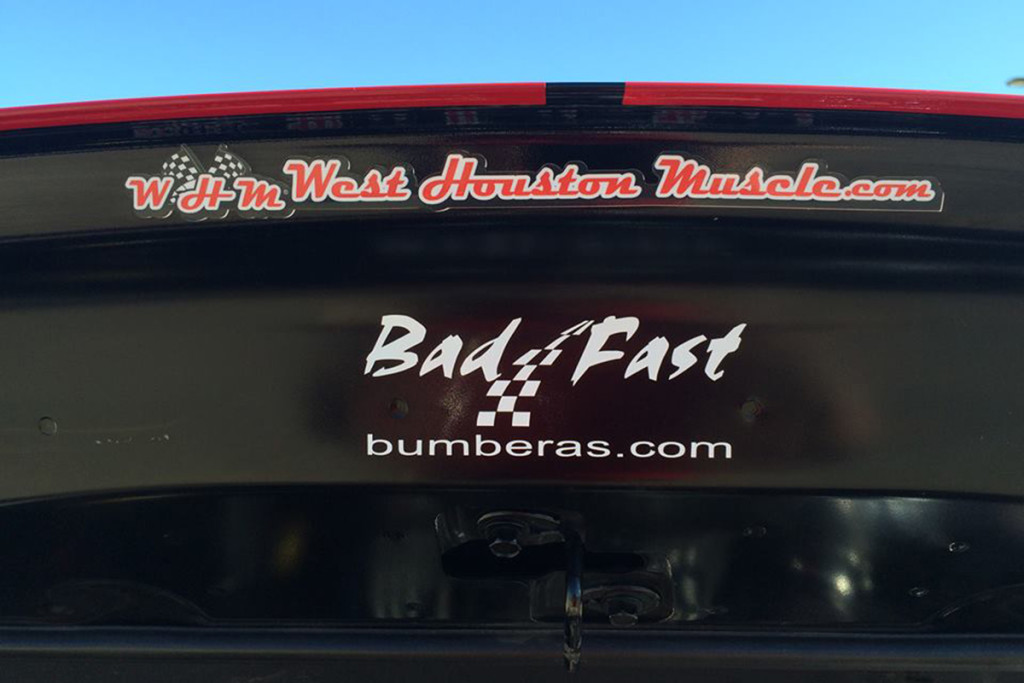 Shortly after getting it home from the dealership, he took it to Bumbera’s Performance Associates of Katy, Texas. Bumbera’s is something of the official “power adder shop” of the car club he belongs to-West Houston Muscle Car Club (WHM in the photos). In fact, they’re an official sponsor of the car club. Bumbera’s very good care of the Challenger, indeed. In fact, they made it Bad Fast.

The first thing they did was yank out the overly restrictive stock exhaust system. Remember, I’ve mentioned a few times in the past that one of the easiest and quickest way to bolt on power, no matter what car or engine you’ve got is to allow the engine to exhale better.

So, the Challenger got a full cat back exhaust system. This included three inch pipes and equal length tubular headers that were designed by the guys at the shop. Chuck doesn’t have numbers, but I’d lay better than even odds that this mod alone gained him at least 50 ponies under the hood.

That Was in No Way Enough for Him. He Had to Get Stuffed

Just over 500 ponies galloping under the hood is pretty nice, but it still wasn’t enough for Chuck. “There’s no power like Mo’ Power” is the mantra of the Mopar guy, so he had Bumbera’s keep going. Their head tuner, Kenny Bumbera, decided to keep going with the “let it breathe better” theme as easy bolt on power. 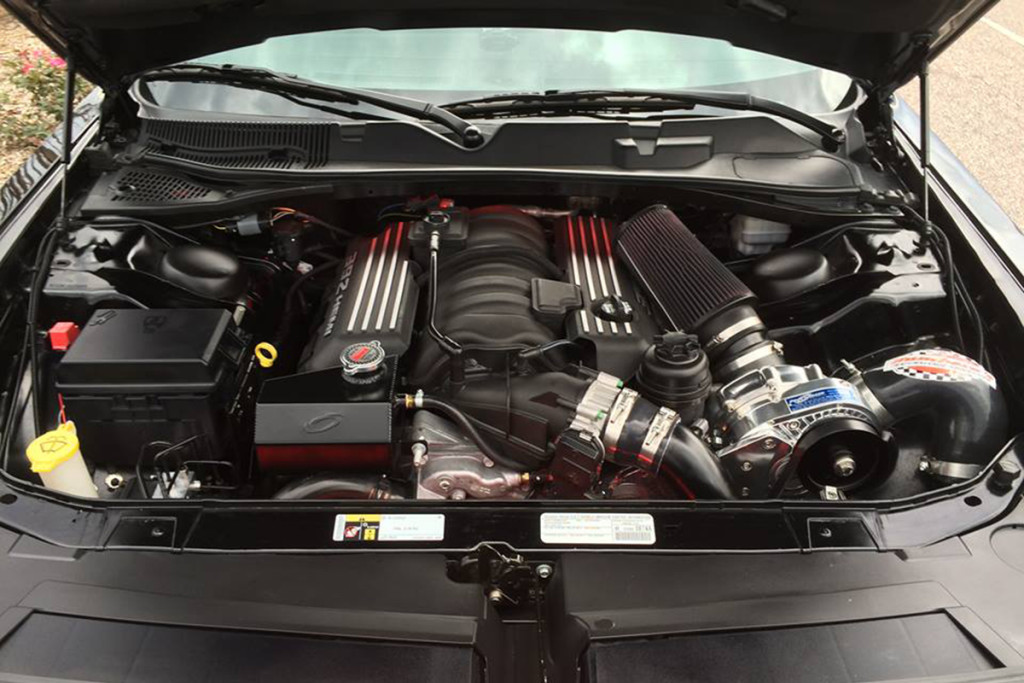 That meant the air and fuel induction side of the engine. The first thing that went in was a cold air intake system. Bu the measly gain of 25 horses or so wasn’t enough to excite him. Then Kenny gave ProCharger a call. 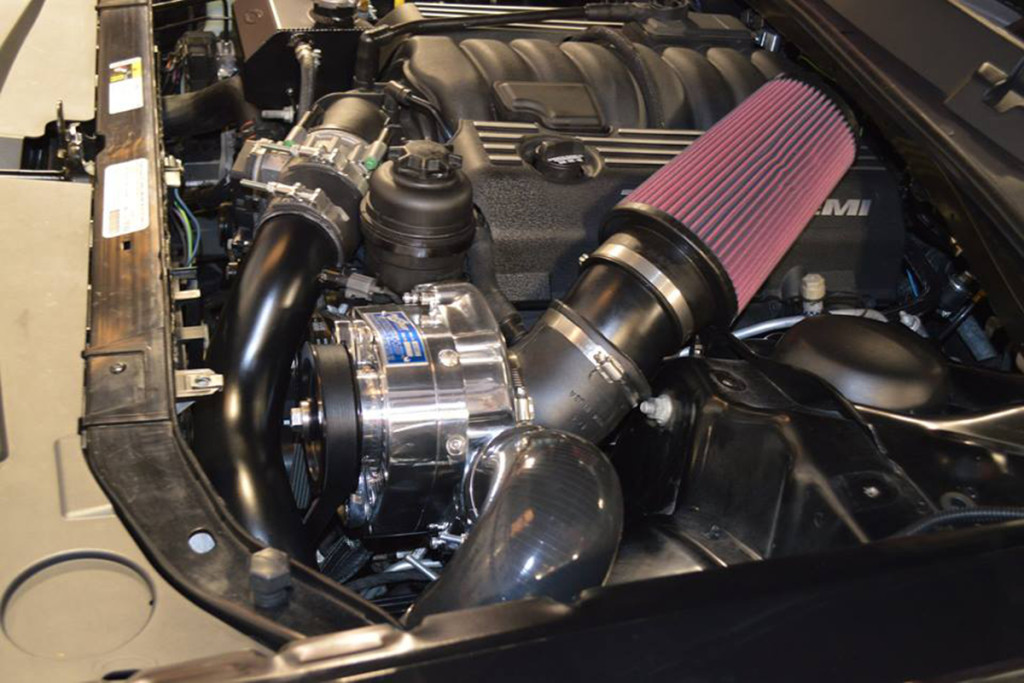 The guys got busy installing ProCharger’s P-1SC-1 Hemi V8 supercharger. This is a kit that ProCharger has that looks like the engineers at Dodge designed the engine and engine bay for it, and the people at the factory built it that way. Just looking at it screams “Mo’ Power!”

While you can install a forced induction system in your car and call it a day, it’s not really recommended. You see, when you compress air like that, it heats up and becomes less dense. Less dense air contains less oxygen to burn with the fuel. Just like this, Chuck’s Hemi was probably pumping out something like 550 plus horses. However, it could be better.

Thus, a real engine tuner installs an intercooler when they install forced induction systems like a supercharger. The guys at Bumbera’s are just that, real engine tuners. Additionally, the ProCharger kit for the Hemi Challenger SRT/8 comes with a massive air to air intercooler that’s custom built for the Challenger. Again, once installed it looks like it was always meant to be there. 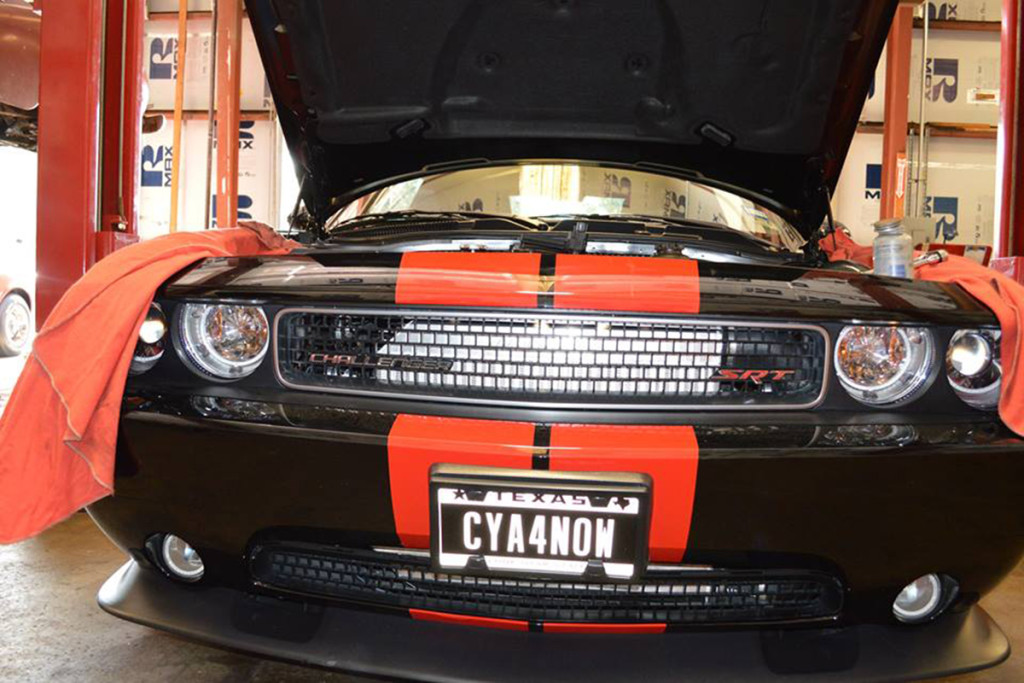 Once the air stuffer and cooler were installed, Kenny and the guys threw the car on their dyno. Straight, without any tuning of the PCM, it still produced an extremely respectable 600 plus horses. However, the PCM still had the factory tune. I’ve also mentioned a few times that factory PCM tunes are designed to deliver a cross between economy and horsepower, but not gobs of both.

Chuck wanted gobs of power. That’s why he was spending the time and money doing the exhaust and induction systems after all. So, Kenny got to work tweaking the PCM’s factory tune for the new engine goodies.

Bump the timing around a bit. Play with the fuel pump settings some. Change the pressure regulator settings. Amp up the injector dwell some. Viola! The engine is now producing a stunning 695 horses at the crank and 605 to the wheels. Torque has jumped to an incredible 545 pounds-feet That’s gotten his zero to 60 down to the supercar realm of around three to three and a quarter seconds.

So far, Chuck’s the car up to 153 miles per hour at the track. His goal for now is 200 plus. He says with all the new engine toys and the six-speed, “It’s sooooo fun to drive now!”

You Can’t Have All the Go with No Show! 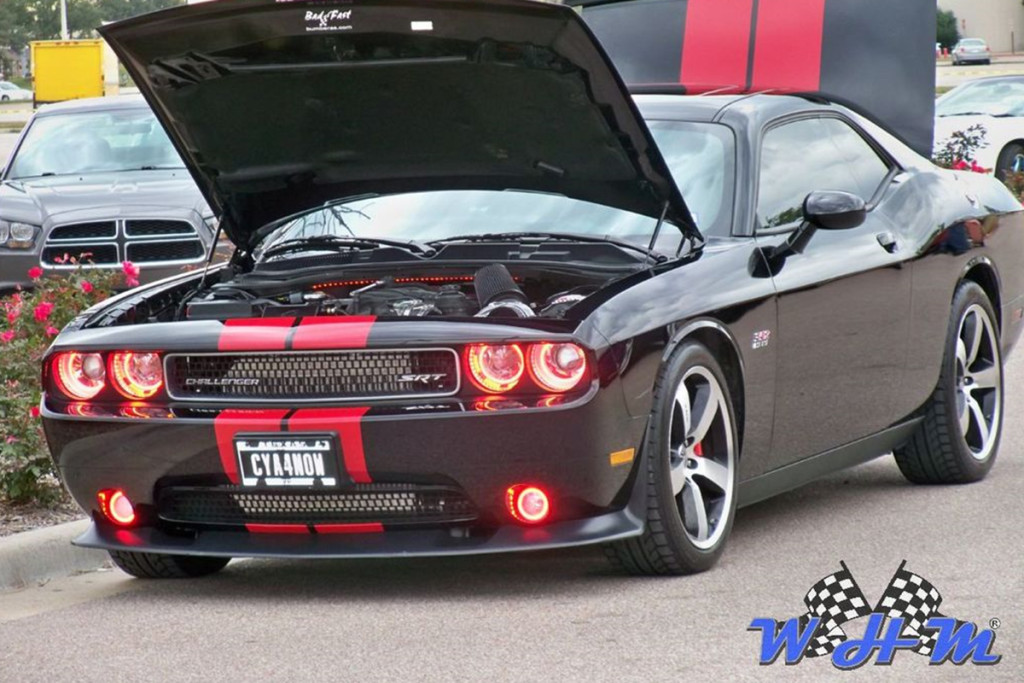 Although the cat back exhaust system and supercharger are sweet looking additions to the Challenger SRT/8, you’ve got to lift the hood or look under the car to see them. The sound they combine to make is going to turn heads, but there’s got to be something to hold the attention of the viewer.

So, the guys at the shop gave Oracle Lighting a call and got some stuff shipped out. First up was a set of fog lights to light the road better. Next was a cool set of turn signals that give the car a cool glow. The finishing touch up front was a set of halo lights for the headlights. 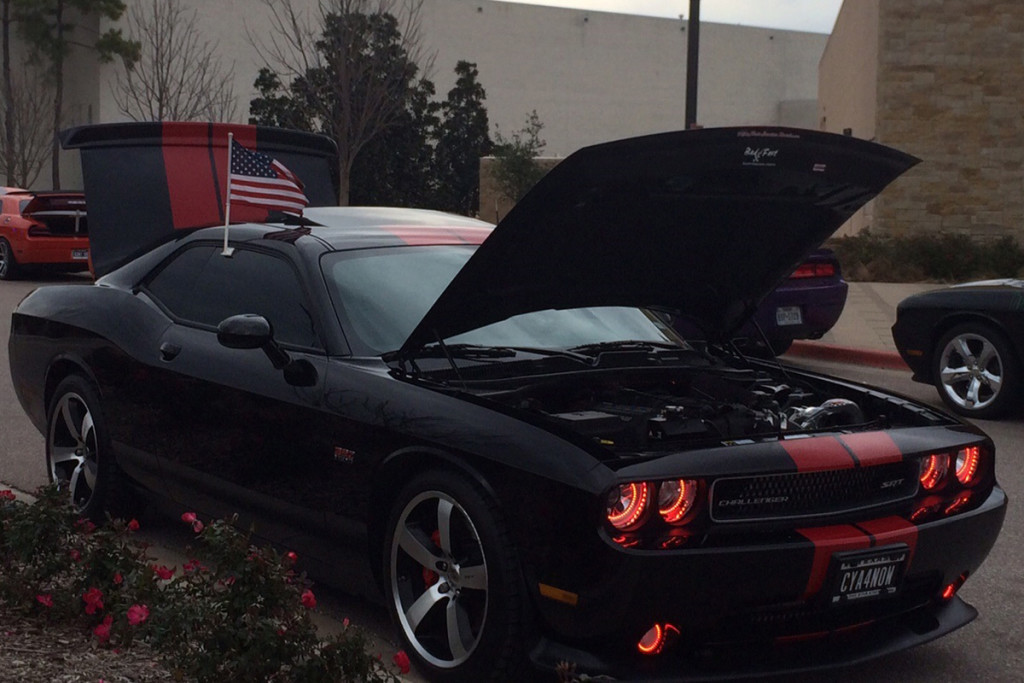 The undercarriage received a set of Oracle undercar lights also. In fact Oracle also supplied under hood lighting and trunk lighting. All these are LED lights for low power consumption with high lumen output. Even better, the lights are all able to be programmed for different colors. As you can see, Chuck happens to like Inferno Orange. Oracle also supplied an interface that hooks the light controller into his stereo system, so Chuck’s got a disco ball setup on wheels.

While he loves the way his car looks and sounds, he’s got more things planned for it. He’s got a set of black powder coated rims with the SRT logo engraved in the center caps on back order. The SRT logo will be painted a brilliant red. Next, there’s a mural. Chuck’s still working on the design for that, so he doesn’t know exactly what it’s going to be. He already upgraded the stock brakes to a set of fatter Brembo brakes, so he doesn’t have to worry about slowing that Bad Fast Challenger SRT/8 down safely.