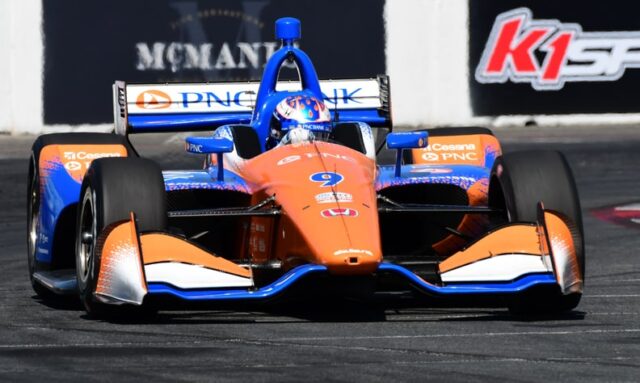 The NTT IndyCar Series completes a 17-race romp this weekend on the hilly permanent road course of WeatherTech Raceway Laguna Seca, returning to that 2.258-mile venue after a 15-year absence. It’s a special weekend, one that will crown a new champion, with acceptance of the series’ Astor Cup dependent on season finale results for a 14th consecutive occasion.

The most recent time Indy cars catapulted through this central California coast road course was in 2004, when Indeck-Forsythe’s Patrick Carpentier won from pole position in what was then known as the Champ Car World Series. 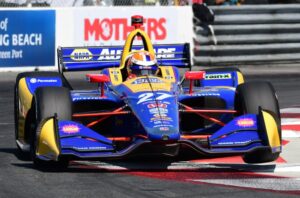 All eyes will be on the four championship contenders in this Firestone Grand Prix of Monterey: Josef Newgarden of Team Penske (Chevrolet), on Alexander Rossi’s Andretti Autosports Honda, the Chevy of Team Penske’s Simon Pageaud and the reigning titleholder, Scott Dixon, who races a Honda for Chip Ganassi Racing.

With double points awarded to all 24 competitors in this 90-lap race, the ultimate outcome of the championship chase depend on drivers’ skills behind the wheel, by strategic calls on pit road and by the wiles of competition.

At this place, just about anything can and will happen. No one, certainly not current team owner Bryan Herta, expected the 1996 phenomenon of Alessandro Zanardi’s “The Pass” that denied the Californian certain victory (and a first win for Mercedes-Benz in CART competition). 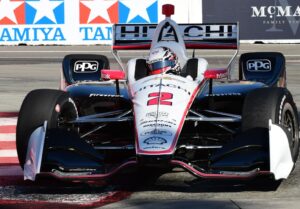 “That track is very difficult to drive. It’s tricky, it doesn’t have a lot of grip,” Vasser noted. “Laguna Seca will punish you if you make a mistake – that I know,” Herta added. “So to go there with several guys still in the championship hunt, fighting for a championship and having that kind of pressure on a track that demands perfection, I think that’s going to be really interesting.”

Certainly these four former racers can give counsel to their current drivers, but only Andretti has a horse in this race with Rossi, currently second in the points standings to Newgarden, who’s looking for his second championship with Team Penske (as is Pagenaud). Rossi still seeks his first title, while Dixon is looking to secure his sixth. 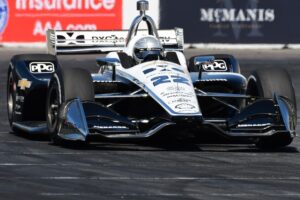 Despite winning at Circuit of the Americas earlier this year, Herta trails Rosenqvist and Ferrucci in the overall standings. Only 50 points separate Herta from Rosenqvist and, since this is a double-points race, there’s no telling who gets the rookie nod. Currently Rosenqvist holds eighth-place points, Ferrucci is tenth and Herta holds 13th place points, while Ericsson is 17th.

Most fans will be looking at the battle between the top four racing to earn year-long honors. Newgarden, who led in points after every race but the double-points-paying 103rd Indianapolis 500 (where Pagenaud took the lead), holds 593 points, while Rossi is second with 552. The 100th Indy 500 winner intends not to repeat his 2018 error on the first lap at Sonoma Raceway that essentially sealed Dixon’s fifth title.

Pagenaud is a single point behind Rossi with 551 while Dixon holds 508 points, making him the wild card in this four-driver spat. Dixon won his fifth championship last year by capitalizing on others’ errors, including Rossi’s pass attempt on teammate Marco Andretti in the first turn of the first lap. Pretty good bet he won’t try that again.

WeatherTech Raceway Laguna Seca is setting the scene with a great weather forecast for this championship race weekend. Sunshine is forecast with only a 10 percent chance of rain. Temps should range from the mid-80s to the mid-70s with noon on race day expected to be just right for tight racing.

It’ll be great conditions for the 24 drivers, the Chevrolet and Honda engines, the Firestone tires. Only one racer will be first to the checkered flags but that doesn’t necessarily mean the champion will win the race. NBC will broadcast the 90-lap contest, starting at 11:30AM Pacific Time.