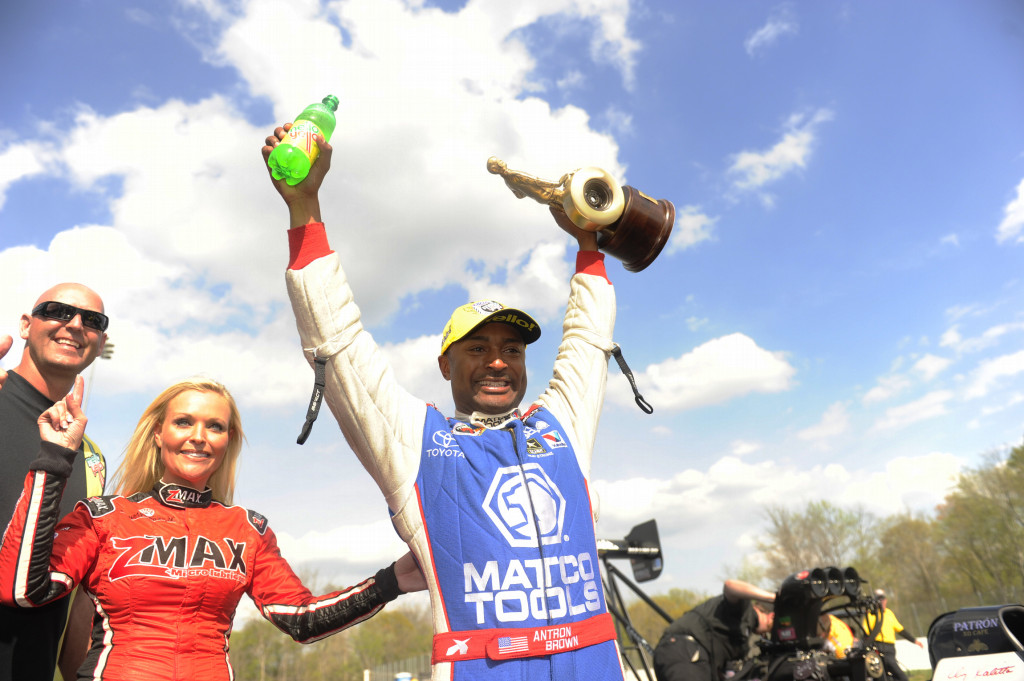 The NHRA 4-Wide Nationals is one-of-a-kind event exclusive to the Charlotte Motor Speedway zMax Dragway in Concord, North Carolina. Dreamed up by track owner, Bruton Smith, the idea was that if two NHRA nitro cars are exciting, four would raise that to an exponential level. Smith was right, and his vision has carried over to one of the most diversified racing complexes on the planet  for the straight-line fans.

This weekend saw a mixture of repeat winners in the Pro categories and the first glimpse in America of a rising international drag racing star. The 4-Wide design forces drivers and crew chiefs to take a different approach than a normal drag race, with drivers doubling up staging procedures and crew chiefs having only one shot per lane for qualifying.

Heats of four drivers in two pair of lanes are separated by a center dividing wall.  The top-16 qualified cars meet Sunday in elimination rounds again in four-car heats. The first two crossing the finish line advance to the next round.  In the championship round, four finalists race for the event title, runner-up position and the other two earn semifinals championship points.

“As drivers, the only thing we can do is screw it up on the starting line,” Brown said smiling.  “You just have to be on point and give it all you have.  When you’re racing people like J.R. Todd, he’s a great driver, and when you race Langdon, he’s a tremendous leaver.  You’ve got your work cut out for you.  I just went up there and was poised.  Race day, you have to be on time.

“It feels really good to get the job done, especially when your boys work so hard.  Just an incredible day!  It feels good to get another win; it’s tough enough just to win a round.  To go out in the final round and do what we did is purely awesome.  All these cars ran so good.  Just to sneak one out felt good.  Our car’s been running good.  We didn’t want to push her too hard on the last lap so the boys eased her back a little.  It feels good to win again.”

Brown, who is second in points with 460, moved to within 25 of leader Doug Kalitta, who is having his best start in 17 seasons with one win and four final round appearances in the first five races now has accumulated 485 points as the tour heads to the next event near Houston in two weeks.

Robert Hight repeated his patented Charlotte performance taking the Funny Car  win at the  NHRA 4-Wide Nationals  in the final quad,  bringing down his boss, 16-time champion, John Force; two-time 2014 winner, Alexis DeJoria; and a tough Tim Wilkerson.  It was Hight’s second consecutive win at Charlotte winning, making him the first two-winner of a 4-Wide title.

It was DeJoria’s third time in the finals in the past five races, keeping her title contention real.

Hight’s tremendous reaction time (.044) secured his 31st career Funny Car win with a blistering time of 4.074 at 311.34 mph breaking the tie with Kenny Bernstein in overall Funny Car victories and takes over the sixth position in that category respectively.

“The whole field is tough.  You look at it top to bottom.  Anybody can win one of these races.  There are a lot of great cars out there.  Kalitta (Racing) is running great. Schumacher (Racing) will be there.  Wilkerson is running well.  It is all tough,” said Hight.

“If you let up just a little bit and don’t take everybody seriously, you are going to be on the trailer.  We took the points lead over in Las Vegas.  We don’t want to give it up.  I didn’t want to have to wait between here and Houston thinking about getting the points lead back.  I want to go to Houston knowing we still have the points lead.”

The Pro Stock final was the feel good story of the race weekend seeing first time finalist, Jimmy Alund of Sweden, take his first Mello Yello win of his career while substituting for the recovering Greg Anderson of the KB Racing Summit Pro Stock team.

In only his fifth race of a six-race agreement, he drove his Summit Chevy Camaro to the win over Shane Gray, Vincent Nobile and recent Vegas winner, Erica Ender-Stevens.

“To be able to outrun nine cars in one day – and against drivers and teams that I’ve been looking up to (while) racing in Europe is pretty awesome,” said Alund, who ran a 6.562 at 211.59 mph that was a thousandth quicker than Gray in terms of elapsed time (6.563 seconds) after leaving with a great .029 reaction time.

With his triumph, Alund became the first European winner and only the fourth non-American winner in the NHRA Mello Yello Drag Racing Series.

He endorsed the win contributing his KB Racing team in being so supported by a group that welcomed him with open arms and immediately accepted him as one of their own.

“This means a lot,” said Alund.  “It really hasn’t sunk in yet; let’s put it that way.  I have a lot of wins in Europe, but this is something special.  It will be hard to climb out of the seat.  We have a really great group of people in Pro Stock, and I’ve had a great time. The Summit Racing guys are awesome, and everyone is laughing and having a good time.  I think that’s a very key ingredient.”

Alund showing his sense of humor in conclusion of his post-race media interview said, “Yeah, I have to leave soon.  It’s getting real expensive paying Greg’s doctor off to keep telling him over and over just two more weeks.” 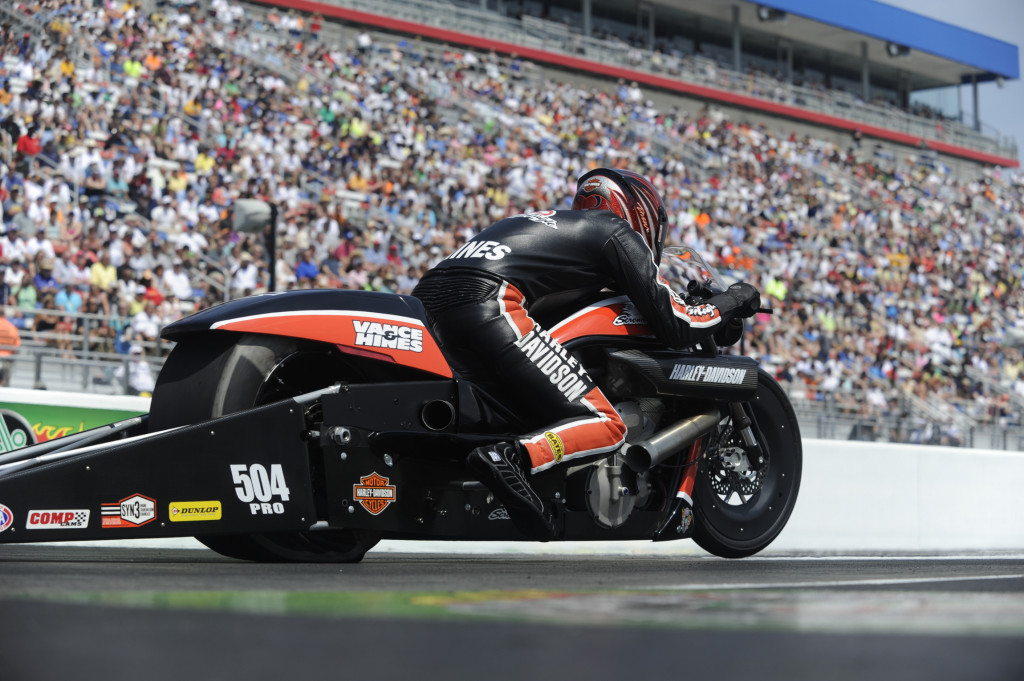 Andrew Hines, a three-time Pro Stock Motorcycle world champ, won his second straight race in Charlotte with a 6.859 run at 196.10 mph.  The three-time Charlotte winner secured his first win of the season and 33rd of his career with the win over Eddie Krawiec, John Hall and Scotty Pollacheck on a Harley-Davidson.

“This does a lot for my confidence because I’ve never had a round win here (at the Four-Wide),” Hines said.  “In fact, Charlotte was bad to me.  It took four races before I broke through for a win at the two-wide race in the fall.  At this race there is so much going on that you never know what’s going to happen.  Some guys take a long time to stage and some guys want to get up there as quickly as they can.  You have to be prepared for anything.”

The NHRA Mello Yello Drag Racing series now moves on to the Royal Purple Raceway for the O’Reilly Auto Parts Springnationals in Baytown, Texas on April 25 – 27.