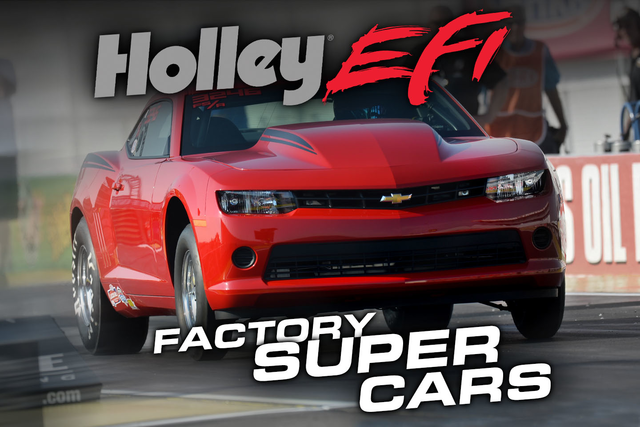 Holley has officially announced the NMCA’s purse and contingency programs for the Holley EFI Factory Super Cars class.  Race teams will receive contingency payouts from participating aftermarket manufacturers as well as from the automotive manufacturer of their race car. The new factory contingency program is given in addition to the NMCA Pro Contingency program, which includes NMCA trophies and payouts as part of the Aerospace Components Winner’s Circle.

The Factory Super Cars class is for 2008 and newer COPO, Cobra Jet, and Drag Pak factory cars. The class will compete at all six 2016 NMCA events with a points champion crowned at the 2016 NMCA Awards Ceremony.

“We are thrilled to have all three manufacturers participating in this new factory contingency program. All of our racers should be proud to have Jesse Kershaw of Ford, Curt Collins of Chevrolet, and Dale Aldo of Mopar supporting this new class sponsored by Holley EFI,” said NMCA’s General Manager, Rollie Miller. Robin Lawrence, Holley’s Director of EFI Business Development, added, “We are proud to be able to support such an exciting class of heads-up racing. We already have deep ties with many of the NMCA Factory Super Car teams from NHRA Stock Eliminator, so it was a natural evolution for us to support the class, especially with so many cars in it already using Holley EFI.”

Factory Super Cars will compete at all six 2016 NMCA events: